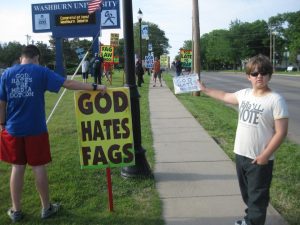 The 23rd chapter of Matthew is probably the harshest speech that Jesus ever gave. We don’t hear many sermons about it because Jesus was skewering the celebrity pastors of his day. Verse 15 is particularly poignant and troubling: “Woe to you, scribes and Pharisees, hypocrites! You travel over sea and land to make a single convert, and when he becomes one, you make him twice the son of hell that you are.” Son of hell. I thought of this verse when I saw this photo that has circulated facebook about 9-year old Josef Akrouche’s counter-protest against the notorious Phelps family. It’s hard to read his tiny sign which says “God hates no one.” My heart hurts for the kid on the left who stands back turned and face down with his “God Hates Fags” sign. He didn’t choose to be born into the sons of hell. But his family’s witness has become a critical tool God has used to show what His kingdom is not about. And Josef’s act exemplifies the response that the sons of hell are supposed to invoke as part of God’s process of establishing a world free of hate.

For any Bible nerds out there, the Greek for Jesus’ phrase “son of hell” in Matthew 23:15 is huios geenes. In other words, Jesus is not talking about the neutral afterlife oblivion of a Greek Hades or Hebrew Sheol. He is talking about Gehenna, the valley of child sacrifice outside of Jerusalem that was the word 1st century Jews used for a place of eternal torture. No pun intended, but it’s a pretty damning indictment to call someone else a “son of hell.” And the people Jesus gives this awful title to are the opposite of the depravity-soaked sinners that Paul calls “children of wrath” in Ephesians 2:3. Being a slave to “the passions of our flesh” is inhabiting one kind of hell. But based on Matthew 23:14, the preceding verse, the kind of hell Jesus describes here is the bitter existence of those who have made themselves the gatekeepers of heaven: “You lock people out of the kingdom of heaven. For you do not go in yourselves, and when others are going in, you stop them.” We become sons of hell when we devote our lives to locking people out of the kingdom of heaven.

Now I’m not going to pretend that Matthew 23:14-15 is all that the Bible has to say about heaven and hell, that the whole gospel is a message of “tolerating diversity, ” and we can disregard the wrath that consumes us when we abandon ourselves to “the lusts of our hearts” (Romans 1:24). But there is a tremendous danger to which the Pharisees bear witness, and I’m flabbergasted at the way that Christians who claim to be “Biblical” seem to have blotted the Pharisees entirely out of their Bibles. Most of what Jesus says in the four gospels occurs in the context of arguing with the people he called sons of hell. His witness cannot be detached from their counter-witness. Christians’ lives should not only be an emulation of Christ, but also a contrast to the Pharisees who opposed Him. The Pharisees show that God’s law without Christ’s atonement does not suffice. Jesus’ cross saves us from being “sons of hell” who lock others out of heaven just as much as it saves us from being “children of wrath” whose slavery to sin locks us out of God’s glory. The more Christians act like sons of hell, the more they show themselves to be unsaved.

The peril to which the sons of hell bear witness is the intoxicating attraction of locking others out of the kingdom of heaven. It gives us an extraordinary sense of power to feel that we have the authority to damn other people. And it makes sense that a “gospel” which accentuates clear “us” and “them” categories between elect and damned would be attractive to people who are bewildered by the confusion of navigating a religiously pluralistic society. But once we are seduced by the power of damning others, it’s hard to escape the gravity of the black hole that creates. The way that sons of hell  prove their worth and fidelity to God is through their zeal to damn. It becomes no longer sufficient to damn homosexuals, Palestinians, illegal aliens, or people of other religions. Christians who are unwilling to damn others must be damned themselves, as well as Christians who are willing to associate with other Christians who refuse to damn. I wish I were creating a straw man here, but I’ve actually watched religious leaders use the homosexuality issue primarily as a guilt-by-association tactic, accusing each other not of being homosexuals or blessing homosexuality, but of associating with Christians who have inadequately expressed their condemnation of homosexuality. This profoundly bitter fruit has been an enormous witness in my life and the lives of many young evangelicals like me who have been shaped permanently by this age of culture wars.

But I thank God for this bitter fruit. And I thank God for witnesses like Fred Phelps. Part of what I accept as an evangelical Christian is that everything I need to know is in the Bible. But it’s not as straightforward and self-evident as many Christians would like it to be. Luke 6:44 tells me that “each tree is recognized by its fruit.” The Pharisees who argued with and ultimately crucified Jesus were zealous students of the Hebrew scriptures, but the way they applied what they learned made them into sons of hell and a counter-example God gave us to avoid. When Christians pay attention to the witness of the sons of hell, we can be made “competent as ministers of a new covenant —not of the letter but of the Spirit; for the letter kills, but the Spirit gives life” (2 Corinthians 3:6). With that competence, I pray that we would have the courage to follow in the footsteps of Josef Akrouche and witness to the truth that God hates no one.