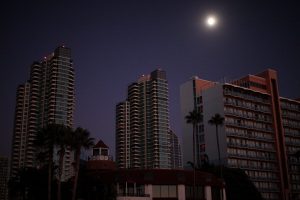 We live in the downtown neighborhood of Golden Hill in San Diego.  It is a place that contains a multitude of narratives.  At times they are warring narratives, other times they are complementary narratives and still other times they simply learn to live in tension with one another.  Shaped by race, economic standing, family culture, age and value systems, they drive the social fabric of our neighborhood.  To know Golden Hill is to know diversity.  It is to know a place that has been broken.  A place that has been written off and at different times in its history been labeled “The Garbage Dump” and “Heroine Hill.”

Roads were at a stand still, homes were dark and businesses closed.

But something else happened.  Something sacred.

TV’s were no longer replacing shared life, florescent lights were no longer drowning out the warmth of the sun, cars were parked in driveways and people took to their patios, yards and sidewalks.  The autonomous life was subconsciously being exchanged for the life of community.

Life did not stop with this blackout; instead we found that life was actually just beginning.

As our neighbors pulled food out of their thawing freezers and put it on our BBQ, our patio began to fill with life, hope and collaboration.  A neighbor posted on Twitter the next morning, “Last night, under a moonlit sky, neighbors became friends across the city. Worth considering how to cultivate such a thing year-round.”

A new story was coming to life.  It was a narrative that transcended all the warring narratives of the past and gave a glimpse into the future we believe God has for this neighborhood.

While praying over his community on the Island of Iona, the 6th century Celtic monk, St. Columba, described his experience as a Thin Place; a place where heaven and earth were only thinly separated; A place where God’s Kingdom was being made real.

We experienced a thin place that blacked out evening in Golden Hill.  As a band of Jesus’ apprentices committed to commune with God, dive deep into intentional community with one another and engage our neighborhood with the new narrative of God’s Kingdom, our missional community seeks to be conduits of thin places.  NieuCommunities desires to develop individuals and communities that not only dream about thin places, but who experience them on a daily basis.

Thin Places: Six Postures for Creating and Practicing Missional Community is a book that was birthed out of lived community committed to following in the way of Jesus while diving deep into the fabric of our neighborhood. These postures and the stories that fill them out aren’t concrete, sure-fire steps to a vibrant life as a missional community. They are simply field notes from our humble attempts at living out the mission of God in the context of covenant community over the past ten years.  It is messy, it is discouraging, but it is beautiful and I really, really think it is worth a shot.

May the Church global be mobilized and empowered by the Spirit to embody the Good News of Jesus in all its forms in every moment of everyday.

—-
Jon Huckins is on staff with NieuCommunities, a collective of missional communities who foster leadership and community development.  He also co-founded The Global Immersion Project which cultivates difference makers through immersion in global narratives.  Jon has a Master’s degree from Fuller Seminary and writes for numerous publications including, theOOZE, Burnside Writer’s Collective & Red Letter Christians. He has written two books: Thin Places: Six Postures for Creating and Practicing Missional Community (Beacon Hill) and Teaching Through the Art of Storytelling (Zondervan).  He lives in San Diego with his wife Jan, daughter Ruby. Jon blogs here:http://jonhuckins.net/.  You can also follow Jon on Twitter and Facebook.