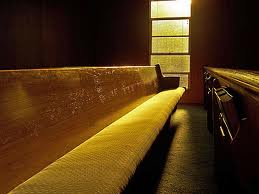 In response to the recent Episcopalian convention, Ross Douthat set off a firestorm with his column expressing “concern” that the liberal church is dying due to its theological incoherence. I’m not sure whether the “liberal” label or the stereotypes are fair, but I am deeply pained by the struggles of the mainline church in which I have spent most of my adult life as an evangelical in exile. As a hopefully more constructive version of what Douthat wrote, I wanted to offer the following three considerations based on my personal memories of the years I spent in struggling, social-justice-oriented mainline congregations.

I have benefited greatly from the relationships I had with older Christians who gave me permission to ask questions, said things aloud that I had thought were taboo even to think, and even let me cuss in front of them. It’s been a huge part of my development to have pastors who were real with me and didn’t judge me for my doubts and questions. I always try to be that pastor to other people.

However, open-mindedness alone doesn’t compel discipleship. I had a very great relationship with a psychotherapist for half a decade. But he didn’t make me a disciple. He comforted me with the unconditional positive regard that he showed me, but he didn’t set me on fire and give me a hunger for God. Here’s what I wonder: are mainline congregations declining because their pastors are good at the unconditional positive regard part but they lack the “fire in their belly” that radiates the conviction that their lives are the product of God’s deliverance?

I never want to preach a sermon that’s just interesting; I hunger and thirst for a word from God that delivers people, that takes them to that place of metanoia, the word that is inadequately translated as repentance but means “never being able to see the world the same again.” While I appreciate the integrity and intellectual passion of somebody who tells me about the disagreement that scholars have over whether the scriptural passage in front of us was written by the Yahwist or the Deuteronomist, what I need to hear from the pulpit is how God is going to deliver me based on what He has done to deliver His people before. A testimony of deliverance is far more compelling than gestures of open-mindedness.

2) There is no church without Jesus’ cross and resurrection

The deliverance at the center of every healthy Christian congregation is the cross and resurrection of Jesus Christ. Everything emanates outward from this eternal reality. It is only because of this reality that Paul can write, “We are hard pressed on every side, but not crushed; perplexed, but not in despair; persecuted, but not abandoned; struck down, but not destroyed. We always carry around in our body the death of Jesus, so that the life of Jesus may also be revealed in our body” (2 Cor 4:8-10). Jesus’ cross and empty tomb are the power that causes ordinary people to do extraordinary things in Christ. The cross and resurrection should be front and center of everything we do as a gathered body in worship. That’s why Eucharist was the focal point of Christian worship for millennia and remains so for Catholics and Orthodox, because everything we are and do as Christians has its source in our participation in the sacrifice of Jesus Christ by which the world is reconciled to God and the resurrected life that emerges on the other side of this utter transformation.

A church that completely avoids talking about the cross because it’s too bloody and the empty tomb because it defies science shouldn’t survive because it’s lost the heart of Christianity. I realize that very ugly misconceptions and monstrous caricatures about the cross have legitimately alienated millions of people, but that doesn’t mean we can put the cross in the closet. You can’t build a religion off of some vague notion of “loving God and loving your neighbor.” These two commandments are only possible to fulfill for people who have stopped trying to prove their worth to God and the world and surrendered to the reign of God’s mercy established through Jesus’ blood. Plenty of people do things to help others because it’s “the right thing to do” and it makes them feel good about themselves. But helping other people is not going to make you fall completely in love with God unless you understand it to be part of the cosmic reconciliation in which you are the mere recipient and pass-through vessel of a love that comes from Someone who let Himself be raped by the world’s nails because He wanted that badly to restore our ability to radiate His image. Everything starts with the cross and resurrection in a healthy church.

3) The kingdom should be our only cause

I’ve been to many protests in my life. Usually there are at least several speakers up front wearing clerical collars. I realize they are under a lot of pressure to frame their speeches in generic, “spiritual, ” interfaith language. I don’t think I could do that if I were ever invited to speak at a rally for immigrant rights or health care or whatever else, because everything I believe about all the particular political issues of our time is shaped by my reflection on what the kingdom established by Jesus’ cross and resurrection is supposed to look like. I would try my best in such a situation to be respectful and acknowledge that I’m speaking out of my own faith tradition, but then I would actually speak out of my faith tradition just as I would expect a rabbi and imam to speak out of theirs. And my speech would not merely be in support of some particular piece of legislation or community initiative; it would be an invitation to enter God’s kingdom because I honestly believe that people who live in the kingdom are better equipped to propagate God’s justice and mercy throughout the land than people who support this cause or that cause because of their intellectual convictions, a rebellion against their upbringing, their cynicism, their love for Jon Stewart, or whatever else it is that makes people activists who haven’t been filled with the ravenous hunger to see the kingdom of God come with power.

It’s because of my understanding of the kingdom that I can respect the Teavangelical perspective that society needs to be transformed and the poor need to be empowered by us as the body of Christ rather than outsourcing this responsibility to the government. I disagree with them insofar as I don’t think God is prohibited from using the secular government to care for His widows and orphans, though I would rather see them cared for by the body of Christ through kingdom means. In any case, I really feel like liberal pastors will be more effective at accomplishing their social justice objectives if their congregations are grounded in a comprehensive vision of God’s kingdom rather than a list of issues that bleeding hearts should care about.

I have no idea the extent to which this is or isn’t happening now. But I am convinced that we cannot get to God’s true justice if we’re starting from a generic secular discourse on human rights. The best justice that human rights can generate is “fairness, ” where people get what they deserve. That’s not good enough for God. God’s justice (mishpat) is so much more than just getting what you deserve; it’s getting what you don’t deserve but what you need in order to have the existence of perfect completeness and fulfillment captured by the Hebrew word shalom, which some people just call “peace.” Mishpat and shalom can only be established in a space where God’s mercy reigns, where Jesus’ blood has made all things clean and the Holy Spirit has resurrected all things into a new life built on grace. That space is the kingdom of God.

Churches gain and lose momentum for a variety of good and bad reasons. When Jesus told the crowd in John 6 that they would have to eat His flesh and drink His blood, many of them turned away saying that it was a hard teaching. So if liberal churches are declining because they refuse to conform to the worldly expectations of “focus on my nuclear family” suburbanites, then God bless them for being faithful. But if they’ve lost their mojo because their openness to questions and doubts is louder than their testimony of God’s deliverance, if their anxiety about causing offense has caused them to hide the cross and empty tomb under a bushel, and if their passion for causes is not anchored in a hunger for God’s kingdom, then the most merciful thing God can do is to crucify and resurrect them (as He needs to do with all of us).