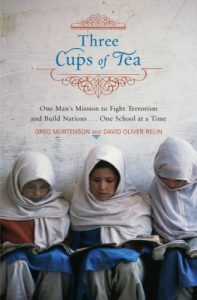 Last week I watched the “60 Minutes” expose on Greg Mortenson, author of Three Cups of Tea. It felt like a punch in the gut, even if it’s of the too familiar heroes-come-crashing-down variety.

It must have felt like a punch to many. None of us like to give our hard-earned pennies or dollars or peace prize money to someone who betrays our confidence.

I felt it in my gut, too, because Mortenson and I have a lot in common. We’ve both published two memoirs about our experiences and work for education in the developing world, he in Afghanistan and I in Haiti. We both travel to speak about our work — albeit he on a much grander, best-selling-er scale than I. Once I stood for half an hour in a book line to talk with him for two minutes and he seemed touchingly humble and friendly.

But he’s been accused of fabricating key stories in his books, lacking organizational/financial transparency and effectiveness, and receiving “excessive” personal benefits from his organization.

The accusers don’t deny that he’s done some worthwhile work. But right now, even with his posted responses, too much is murky. I deeply hope the truth proves less damning than the accusations, but meanwhile, three thoughts:

Still a little bitter so many swigs later. We need inspiration to be better people. But someone told me once you should never be the hero of your own stories. By the same logic, it’s wise to be wary of anyone else who is.

And while he was the hero, one of the things I liked about Mortenson was his self-deprecating posture in his book and speaking. I found his clumsiness inspiring since at times I feel clumsy myself in this work. But you can’t make up dramatic, untrue stories. That’s fiction. To me, it’s in a nobler cause but a worse betrayal than James Frey’s A Million Little Pieces. Frey had literary/personal ambition. Mortenson has made himself the centerpiece of education for tens of thousands of children and solicited money from people, while asking for a lot of trust in his story and work.

If he did what he’s accused of, he undercut these children’s education (though, of course, they likely wouldn’t have received education at all otherwise). While doing a lot of good, he would also have been undercutting the way people engage with “true” stories and giving. Whether he’s innocent, guilty, or somewhere in between, we do well to check our anointing of saints.

Second Cup — Are We Partly To Blame?

No. That’s the short and final answer. Whatever he did or didn’t do, it’s all on him. But I find the story more interesting if it leads to insight about our systems, lives, and culture.

The system rewards dramatic stories and cult of personality, which helps cut through the busy noise of so many stories, needs, tragedies, invitations to give.

As co-director of a nonprofit, seeing how generous people are is one of the great gifts of my life. I also see how important it is to care for the trust of these relationships. Those of us working in nonprofits get to be a bridge between people who are giving and people who have needs — say, children who otherwise would have no chance for education (only about half of children in Haiti get to attend elementary school).

Knowing this, in our organization we keep a check on ourselves through: weekly progress videos from Haiti, Google maps with locations of our seven schools, photos, reports, many visitors to our work, Haitian colleagues at our presentations in the U.S. whenever possible, annual audited financials, a board of directors of which neither my co-director nor I are part of, 100% of my book proceeds and honorariums going to our organization — all these things are vital to what we’re doing.

We’re far from perfect, but if our work is important and committed to ongoing change, there better be checks and balances. That and a wariness of hero-worship are both unpleasant to swallow — because we need inspiration and the heart is rewarded by being able to give generously. But there are better ways.
Third Cup — Truth Must Be Married To Justice

Robin Hood is an archetype who breaks moral norms to achieve a greater justice. It’s an appealing story, of course. You get to be the bad guy and the good guy all at once. And there are real life examples worth holding up of breaking laws to help others or to transform unjust society.

One good check on the Robin Hood archetype is to ask how much the bender-of-the-morals will personally benefit. Another check is to remember that, ultimately, for justice to work it has to be inseparably married to truth.

Mortenson needs to provide clearer answers, and he says they’re coming. He also needs to increase transparency all around. As givers or as people leading a charity, our hearts constantly need to be in concert with our heads — that is, with what is true. Transparency, accountability, and sharing power are crucial for making this happen.

And for all of us who are charitable givers, well, Mortenson’s story is not an excuse for a lack of generosity to help, for example, educating girls in Afghanistan or Haiti or elsewhere. To use this as an excuse would be flimsy and cheats justice. But to blame the media or not to insist on clearer answers short-changes the need for truth.

The right position is to be in mutual service to justice and truth — and to keep being humbled by this posture.

Rather than an excuse, this story should just be another reminder to stumble forward honestly to change the world for better. It’s a lesson worth drinking over and over — and most of us need far more than three cups. The measurement of success isn’t the New York Times bestseller list or our salaries or outside praise, but the effectiveness of our service and the orientation of our souls as we continuously repent and strive toward justice, truth, and love.

—-
Kent Annan is author of the new book After Shock: Searching for Honest Faith When Your World is Shaken. He is co-director of Haiti Partners. He is also author of Following Jesus through the Eye of the Needle. (100% of the author proceeds from both books go to education in Haiti.)