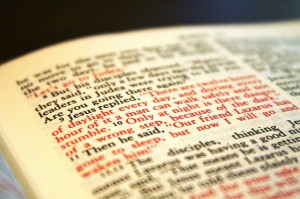 Gandhi once told Rufus Jones, the Quaker theologian and missionary to India, that Christians were “so unlike” their Christ. The good news is that there is a growing movement emerging across America (which goes by the name “Red-Letter Christians”) whose members are endeavoring to respond to Gandhi’s criticism by committing themselves to living out the radical lifestyle that Jesus defined for those who would be His disciples. The words spoken by Jesus in many editions of the Bible are printed in red letters, hence the movement’s name.

Those who are into being Red-Letter Christians give special attention to what Jesus said in his famous Sermon on the Mount (Matthew 5-7). This should be a welcome emphasis to those spiritual progressives who are allied with Tikkun. What Jesus taught in that passage of the New Testament scriptures embraces the values of Tikkun, for in it Jesus calls upon His followers to become peacemakers who are rejecters of violent responses to evil (Matthew 5:38-39); to oppose capital punishment in learning that those of us who receive God’s mercy must show mercy (Matthew 5:7); to turn from all forms of dehumanizing others (Matthew 5:21-22); and to give sacrificially to those in need (Mark 10:21). Most importantly, Jesus teaches His followers to pray that God’s Kingdom (what our Jewish brothers and sisters refer to as a society marked by Shalom) become a historical reality “on earth as it is in Heaven” (Matthew 6:10).

There is little in the words of Jesus that is otherworldly. His main emphasis is calling His followers to live out love and justice in this world. Perhaps the most far-reaching social implications of those red letters in the New Testament is found in Jesus’s declaration that there is a sacred presence in every human being, and when we respond to the poor and oppressed in their needs, we are responding to God (Matthew 24:40).

A Roman Catholic theologian who calls himself a Red-Letter Christian once said to me, “You Evangelicals get ‘saved, ‘ and then you do intensive studies of St. Paul’s epistles as your means of growing spiritually. Eventually, you get around to reading the four Gospels. We Catholics, on the other hand, get steeped in the Gospels and then eventually get around to studying the Paul’s writings. Not that there are contradictions between them, but you’ll have to admit that there’s a different ‘feel’ if you understand Jesus with Pauline theology rather than coming to Paul’s writings steeped in the lifestyle and values prescribed by Jesus.”

When I asked the consequences of these differing emphases, he answered, “You Evangelicals turn out television evangelists, whereas we turn out Mother Teresa.”

That answer stunned me! Red-Letter Christians want to challenge that Catholic theologian’s critique of Evangelical Protestants; we are ready to make St. Francis of Assisi one of our prime role models. In Francis we find a man who has become the patron saint of environmentalists because of his reverence for nature — the kind of peacemaker who, in the midst of the Crusades, worked for reconciliation between Christians and Muslims and made caring for poor people a primary means of living out love for God.

The spiritual progressives who have allied with Tikkun should be encouraged by the Red-Letter Christian movement. I, as a part of this movement within Christianity, still hold to the doctrines of the Apostles’ Creed and believe that being Christian is to be mystically invaded by the spirit of the resurrected Jesus. But in pressing toward living a Christ-like life, I find a cooperative fellowship with spiritual progressives and with secularists who, like Gandhi, have few problems identifying with the teachings of Jesus concerning love and justice, even if they fail to be impressed with Christians.

—-
Tony is the co-author with Mary Darling (who also published an article for this issue of Tikkun) of The God of Intimacy and Action (Jossey-Bass 2007) and Connecting Like Jesus (Jossey-Bass 2010).