Yesterday the men on Tennessee’s death row, 4 of whom have scheduled execution dates in the near future, invited Governor Haslam, the man who signs the death warrants, to join them for prayer.

The backdrop for the story is that TN has more executions scheduled in a year than the state has killed in the past 50 years.  Last week as Christians around the world remembered Good Friday, the day Jesus was executed, legislators in the Bible belt state passed a bill to reinstate the electric chair (which would make it the only state to require death by electrocution).  The only thing that could be more troubling would be if Tennessee decided to start crucifying people again.  I even heard one politician defend his position saying, “It is God’s job to judge them, but our job to get them to Him.”

Meanwhile, this week Governor Haslam was set to speak to a gathering of influential Christian leaders in Nashville at precisely the time of the first scheduled execution in 5 years, Nickolus Johnson.  Thankfully, the execution was stayed.  The governor still spoke to the group, and was asked publically how he reconciles the death penalty with his faith, especially given the fact that less than 5% of Americans think Jesus would support execution.  It was refreshing that he didn’t have a good answer.  It made you think he might not sign the warrants, that he might come to the conclusion of other governors have —  that no human being should have that much power over life and death.

Also by Shane: The First Year of the Pope’s Revolution 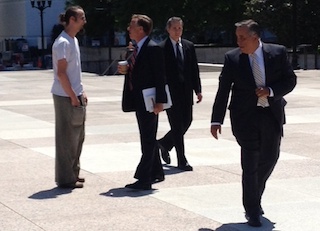 Shortly after his talk, I bumped into the governor.  Stumbling for words, I recalled a story where Mother Teresa talked with a governor facing a similar string of executions as Haslam.  With her characteristic cocktail of boldness and humility, Mother Teresa commissioned the governor with these simple words:  “Do what Jesus would have you do.”  That governor halted executions.  So before I knew it, those were the words rolling off my lips. I’m no Mother Teresa, but I hope this governor does the same thing her governor friend did.

After the meet-up with the governor, we took a trip to meet the men on death row, at Tennessee’s maximum-security prison, Riverbend.  I sat down next to a man I recognized from the news, Nickolus Johnson – the man who had been scheduled to die yesterday.  Joined by a few friends from the conference, we met with Nickolus and the men on death row, four of whom have dates scheduled for their deaths.  We told them about our brief encounter with the governor an hour earlier.  Then, I asked them what they would say if they had a few minutes with the governor.  We all sat on the edge of our seats, anticipating the possible responses – perhaps a few choice words.  One of the guys said, “We’d invite him to join us for our prayer meeting on Friday – to come pray with us, worship with us, and get to know us…”  Enthusiastic nods around the room, and grunts of affirmation came out of the men.  I sat stunned.   Men scheduled to die inviting the man who signed the death warrants to come pray with them.  It would be like Jesus inviting Pontius Pilate over for dinner.

I thought back to Holy Week last week, and it occurred to me that Jesus did exactly that.  He broke bread with Judas, knowing that he would betray him with a kiss, sell him out for a few pieces of silver, and be tormented to the point of suicide.

The men on death row are not Jesus – they are children of God who have good and evil at war inside of them, just like we all do.  And the Governor is not Judas – in fact, word on the street is he wants to be more like Jesus.  I have huge hopes that he will interrupt the patterns of death in Tennessee and find alternatives to the logic of killing to show that killing is wrong.