Horrific news from our friends in Kabul.  Last weekend 2 kids, age 7 and 8, were killed by NATO forces while herding cattle in the Uruzgan Province in Afghanistan.

The Afghan Peace Volunteers (APV), with whom I visited a few weeks ago, took to the streets in nonviolent protest.

They were accompanied by a couple of cows, as a reminder of the innocence of these children who were killed alongside their livestock.

They carried signs that read:  “We are those 2 children.”  Here is a video they sent us:

Here’s a quote from their response to the killings:

We have woken up, and we detest the method of mutual killing in war that the leaders of the world have adopted. We say, with due respect to the leaders, but with no respect for their, or any, act of violence, “We are very wrong. You are very wrong…. We cannot go on resolving conflicts this warring way.” 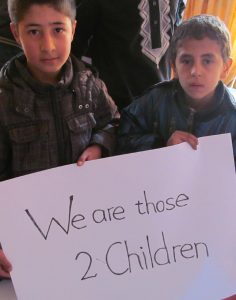 NATO has issued an apology.

The Afghan Peace Volunteers responded to the apology of NATO Commander General Joseph Dunford by saying, “We are tired of ‘sorries’.”

Here are their own words:

We don’t want ‘sorry-s’. We want an end to all killing. We want to live without war. We want all warriors to run back anxiously to their own homes, and fling their arms around their sons and daughters, their grandsons and grand-daughters, and say, “We love you and will never participate in the killing of any child or human being again.”

—
Shane Claiborne is a prominent author, speaker, activist, and founding member of the Simple Way.  He is one of the compilers of Common Prayer, a new resource to unite people in prayer and action. Shane is also helping develop a network called Friends Without Borders which creates opportunities for folks to come together and work together for justice from around the world. His most recent book is Red Letter Revolution, which he co-authored with Tony Campolo.