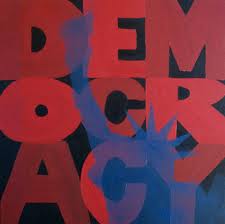 Do Christians believe in democracy? It’s a question we don’t often ask. We often think the answer is an obvious yes. For many people, believing in things like Christianity, democracy, freedom, and capitalism are all just part of being American. I would argue however that there are two ways that American Christians tend to view democracy.

Some see it as the ideal form of human community; others see it as a necessary evil to be overcome by voting the right people into the office. These perspectives are rooted in two very different sets of theological assumptions. Let me explain.

Democracy is more than just a biannual ritual of filling in bubble sheets and hanging up on annoying campaign solicitors. It means more than believing in everybody’s right to fill in a bubble sheet. Democracy is an assumption about the potential for human community to make decisions together, an assumption that frankly many Americans don’t seem to share right now. To believe in democracy means assuming that the perspectives of our ideological opponents help us make better decisions because they contain wisdom worthy of study and thorough contemplation. Believing in democracy means acknowledging how ignorant and wrong I probably am, so I sit and listen to others who don’t make any sense to me until they teach me something. It means knowing I don’t have all the answers, because if I do, then I don’t need a democracy; I need a dictator who agrees with me.

One Christian theology is compatible with this form of human cooperation. If I believe that the purpose of Jesus’ death for my sins is to make me a person capable of admitting my mistakes, then I’m going to welcome my harshest critics as angels sent by God to sanctify me of my ideological blind spots. Scot McKnight’s book A Community Called Atonement describes this kind of Christianity. Jesus’ atoning sacrifice creates a community of people who don’t play gotcha with each others’ mistakes, who are capable of disagreeing without demonizing, who ultimately see reconciliation as the final goal of any quarrel that arises. This type of Christian has no reason to mistrust the insights that non-Christians have to offer. We simply desire as Christians for others to enter into the freedom from intransigent self-righteousness that we have discovered. Grateful sinners who trust God more than they trust themselves are the best citizens of any democracy.

But another form of Christian thinking focuses on dividing the world between the elect and the damned. The cross is not supposed to change how I relate to other people; it simply gives notice that God will eternally punish the damned and declare the elect to be righteous. The damned don’t have anything positive to contribute to the project of building human community. They are simply wrong and there’s no reason to understand why they’re wrong because God created them to be wrong. God put them here to test the elect, whose lives gain meaning through the challenge of waging war with the damned. The only thing to do with the damned is to defeat them. Trying to learn from them and work together with them is morally hazardous. Christians with this perspective does not really believe in democracy itself, because their goal for our political system is not to learn and make better decisions through synthesizing multiple viewpoints, but simply to elect the elect.

Obviously there are as many types of Christianity as there are Christians. These two caricatures do not do justice to the more cautiously nuanced views of responsible theologians of various traditions, but they do capture two widespread tendencies in the political instincts of American Christians. Christians from both political parties can be easily sucked into viewing their opponents as incomprehensible enemies whose opinions are entirely worthless. I have certainly fallen into this mentality myself. But I do believe that God has truth to offer us through all people, even those who haven’t yet discovered the freedom offered in Jesus Christ. Therefore I believe that democracy is not only the most fair but actually the most effective system of government. Instead of being caught up with helping one party beat the other in elections, I’m more interested in helping Christians of both parties act like Jesus in a climate that is anything but Christlike. As a pastor, I hope to help other Christians develop the humble openness the gospel is supposed to instill, so that we can be effective witnesses of God’s love through all facets of life including our citizenship.