“Lord of the church, we are united in Thee, in Thy church, and now in The United Methodist Church.”

With those words, spoken April 23, 1968, at the constituting General Conference in Dallas, the Methodist Church and a smaller Wesleyan denomination called the Evangelical United Brethren merged to form what was then and still is today the nation’s second-largest Protestant denomination, the United Methodist Church.

This weekend in St. Louis, a specially called General Conference convenes to consider a way forward for a global denomination locked in an intractable conflict over faith and order, especially around issues of human sexuality.

Whether they recognize it in the next days or push on pretending otherwise, the United Methodist Church won’t find a way forward without schism. They may stagger along in even more profound disunity and dysfunction, but we’ll look back at the special session as the end.

Schism is coded into the history of Protestantism. The Catholic Church, which understands itself to have been founded by Christ himself on Peter, his first vicar, will stand until the end of time. Denominations are not like that. They come and go, as the past five centuries have shown.

The 1968 merger itself stood at the crossroads of two currents. One trend, a 20th century impulse toward unity, had already peaked. Just before World War II, the Methodists united the northern and southern branches that had split over slavery nearly a century before. After the war, an ecumenical spirit based on a new confidence in Christian activism and dialog led to a number of church mergers.

But baked into the UMC from its inception was a theological divide between liberals who controlled the denomination’s institutions and conservatives who filled most pews and many pulpits. This mismatch showed up in disagreements over the UMC’s social witness on issues including the war in Vietnam, military ethics and intervention more broadly, abortion, environmentalism, feminism and, finally, questions related to homosexuality. 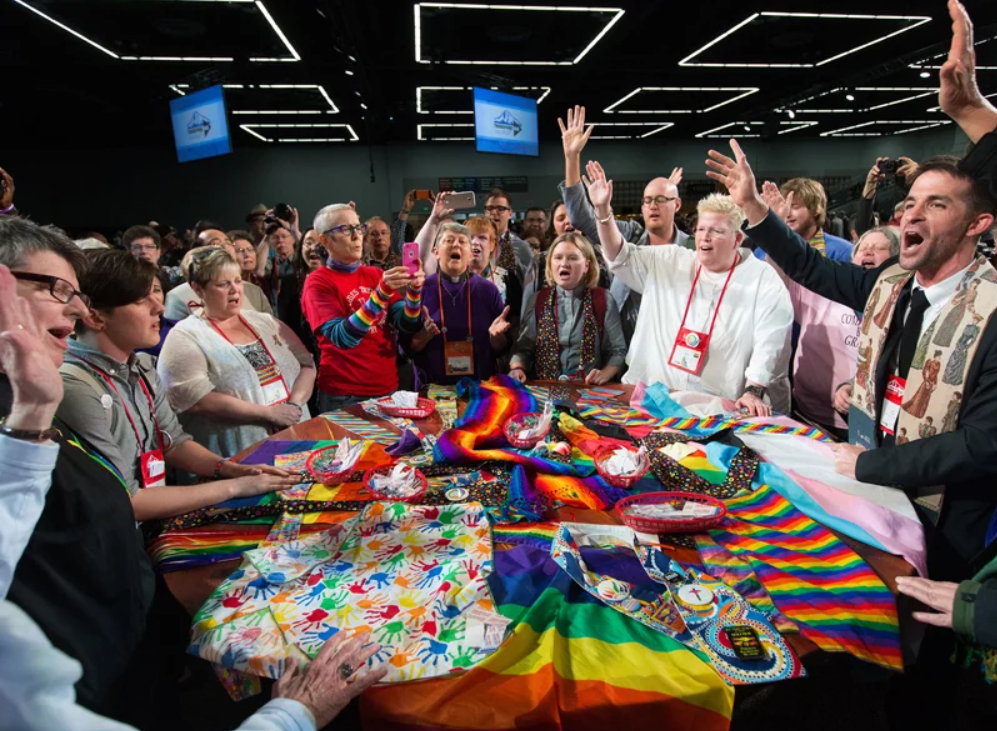 Supporters of LGBTQ rights in the United Methodist Church rally around the central Communion table at the close of the 2016 United Methodist General Conference in Portland, Ore. Photo by Mike DuBose, courtesy of UMNS

The United Methodists have nonetheless gone forward together, even as the unifying trend collapsed and Presbyterians, Lutherans and Anglicans divided and sorted into different denominations according to their theology. Their stick-to-itiveness — not to mention the church’s connectional polity and considerable assets — made schism seem not only impractical, but unthinkable, even as membership declined.

There was reason to think unity in diversity was possible. A famous John Wesley sermon on unity and universality uses an obscure biblical reference to give Methodists a well-known Wesleyan phrase: “If your heart be as my heart, give me your hand.”

Wesley was also known to use the dictum, “In essentials, unity; in non-essentials, liberty; in all things, charity.”

It turns out that human sexuality is not a secondary issue on which disagreement is inconsequential; it is an essential on which unity plainly does not exist.

Either the UMC will host same-sex weddings, ordain non-celibate LGBT pastors and allow clergy to solemnize same-sex marriages — or it will not. There is no middle ground. Either outcome will be unacceptable to the other side. Thus, schism is the only reasonable solution.

The mistake is thinking that a split is ungodly or sinful. Resistance to splitting up is often framed as a paean to Christian unity, but just beneath the surface of those admirable sentiments is a weighty inertia that has plagued and characterized the UMC: denominational life as nursing along an institution.

And as a former United Methodist who has many clergy and lay friends on both sides, I have no illusions about how painful and difficult it will be for LGBT-affirming congregations and annual conferences to leave and for traditionalists to let them go.

But for the sake of United Methodists I love, whose considerable talents in ministry have been consumed in a conflict that has raged my entire adult life, I choose to focus on the positive aspects of accepting reality.

The new, LGBT-affirming Methodist group will be small yet mighty, and it will overnight become the most progressive denomination in the United States. It can forge new coalitions and pursue its version of social holiness without hindrance by American conservatives or by the African United Methodists whose beliefs it has so long abhorred.

As it and other institutions of progressive Christianity decline, there may be fascinating merger possibilities with Lutherans, Episcopalians or others.

The broader UMC will not be uniformly conservative, but it will have more credibility with other evangelical sects after the bulk of the LGBT-affirming progressives are gone. The UMC can focus its efforts on revivalist religion and, as Wesley commanded his ministers, “fleeing from the wrath to come.”

Its political witness will be socially conservative and economically progressive, perhaps giving the UMC greater influence than it had as a liberal mainline lobby in Washington.

Both denominations can engage in ecumenical and pan-Methodist dialogue and activism as they see fit. Both will operate with considerably more integrity and joy. Both can preach and teach the gospel as they understand it and order their denominational life accordingly. These are all good things! Jesus said, “Ye shall know the truth and the truth shall make you free.”

Freedom is coming, but first United Methodists need to face the reality that they are already two denominations living unfaithfully and unfruitfully inside one that is suffering needlessly.

Freedom begins in St. Louis. The differences are irreconcilable, and there is no third way. Unity is at best a delusion and at worst an idol.

Only through a schism and a gracious exit can all the people called Methodist earnestly work with integrity toward their vision of Wesley’s stated goal: “To reform the nation, and especially the church, and to spread scriptural holiness over the land.”