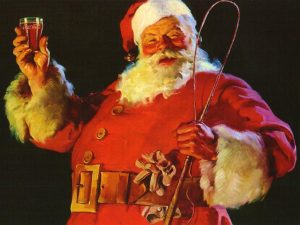 And then there are those who rouse our passions about a “War on Christmas”.

But this compromise is as old as the Christmas story itself.

Wreaths, trees, lights, even the giving of gifts are all Northern European pre-Christian (meaning pagan) contributions to our current holiday celebrations.  All of these were meant to bring greenery and light into the darkest days of winter.

The real “War on Christmas” was fought – and lost – over a generation ago with the flood of corporate entertainment and distractions from the Coca-Cola themed Santa Claus to the endless feel-good Christmas movies and TV specials and the always earlier, relentless shopping blitz, all obscuring the quiet reality – and profoundly disturbing possibility of the Ultimate Divine taking human – and humble – form among us.

In fact, one could make the case that the “War on Christmas” began with the first Christmas and the slaughter of the innocents (Matthew 2:16)

It’s difficult to imagine anything further from the spirit of Christmas than the crowding and rudeness  that accompanies the spending of money we don’t have for things we don’t need. The ultimate Christmas fantasy is that the next sale, the next aisle, the next Christmas event, will complete us.

Our frenzied shopping is surely the opposite of prayer. The big banks profit from the use of our credit cards, the big box stores sell us gadgets and our homes, and lives, become crammed with even more stuff we’ll never use.

But sometimes, sometimes in the stillness of the evening, when we emerge from the daze and clutter of the crowds and busy-ness, we just might come face to face with the baby, in his silence and simplicity, reminds us of the only gift, the only story that really matters.

You could also make the case that the first “War on Christmas” was fought and lost over a thousand years ago. That’s when Christmas became truly unrecognizable to its founders.

It is precisely this intersection – perhaps even collision – of the Divine and the human that intrigues me about Christmas. God has little interest in our expectations, trinkets or rituals.

His ways are truly not our ways, our noise would only disturb the holy baby. We would rush past any holy family on our way to the discounts.

I am convinced that the living God want something very different from us.

To commemorate this birth, I’d like to see a Christmas service that reflects this Jesus. This would be far from the usual holiday extravaganza that seeks to dazzle us. Show me instead a quietly joyful, somber and reflective acoustic celebration, one that would call us back to the baby, in his silence and simplicity, who reminds us of the only gift, the only story that really matters;  the glimpse of eternity held in a baby’s gaze.