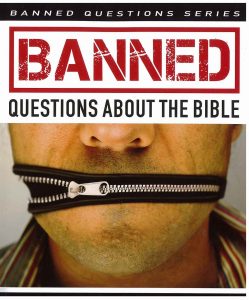 One of the biggest barriers to helpful, healthy conversation about the Christian faith seems to revolve around fear. What if I don’t know something I should and others find out? What if I ask a question that makes me look stupid, unfaithful or even heretical? So instead we wander through our lives of faith, wondering about an awful lot but asking very little.

This isn’t my understanding of the faith we’re called to live out. After all, if your beliefs can’t stand up to rigorous questioning, dialogue and debate, what good are they?

I created the “Banned Questions” book series both to prompt the collective human imagination about often off-limits topics, and also to give others permission to do the same in asking their own questions. The following was one of the more interesting questions that came out of the most recent volume, “Banned Questions About Jesus:”

A woman in Mark 7:25-30 and Matthew 15:21-28 asks Jesus to heal her daughter, but his first response is to deny her help and call her a dog. Isn’t this a cruel, and pretty un-Christlike, response?

I asked several folks from different backgrounds to offer their responses.

David Lose, professor at Luther Seminary and author of  “Making Sense of the Christian Faith, ” writes,

There are two options most readers flee to when trying to make sense of Jesus’ interaction with this Gentile woman. Either Jesus didn’t really mean it (supposedly, he Greek word translated as ‘dog’ was a term of endearment, as in ‘little dog’ or ‘puppy’) or he was testing her faith. Both options are, I think, bogus.

But most Christians opt for one of these interpretations anyway because they can’t imagine a third option: that Jesus was being a jerk. Could it be that Jesus’ mission has gone and ventured ahead of his inherited attitudes? Might it be that the Spirit that drove him into the wilderness is now driving him across barriers, social and ethnic as well as geographical? If so, then perhaps Jesus learns something this day.

If so, then let us give thanks for fierce mothers and pushy women, for we who are also Gentiles have much for which to be thankful.”

I’ve experienced a lot of pushback from people unwilling to accept, first, that Jesus could have been a little bit obnoxious or rude, and second, that he could learn or change because of someone else’s faithfulness. Though for some, Jesus needs to remain pristine and strangely omniscient (if not psychic) at all times, I actually find more to embrace in his more human moments.

Not all of the respondents to this questions share this perspective, however, which makes the conversation that much more interesting.

Professor of Philosophy and Theology Keelan Downton is from the camp that believes Jesus was actually in on the setup from the beginning, offering the uncomfortable exchange as an object lesson for his Jewish companions.

There’s an Irish phrase, ‘winding you up, ’ which describes someone exaggerating (or just making up) a story in order to evoke a strong emotive response from someone else.

I’ve often wondered if Jesus is up to something like that when he renames the most unpredictable disciple, Peter, ‘Rock.’

When this woman persists in seeking help from Jesus he’s not cracking jokes, but he is doing something similar that makes a point by walking around the edge rather than addressing it directly. The story is present to contradict anyone who wished to restrict the gospel proclamation to Israel…

Peter J. Walker points out our tendency to create Jesus in our own image, which is helpful in considering this particular text and how we interpret it.

Many conservatives want a hawk who turns over tables and wages holy war, while liberals want an eco-friendly dove who will leave that poor fig tree in Mark 11 alone!  Undeniably, there is a controversial character to Jesus’ mission that frustrates our attempts to reconcile him as lion or lamb, soldier or hippie.

But what if we don’t even try to justify Jesus’ actions by shaping him to fit our agendas? I don’t think it’s necessary or even ethical to defend words that seem so blatantly unkind. Jesus probably doesn’t need our protection. The Canaanite woman probably does.

Peter’s final statement resonates in a way that is both profound and disquieting. Though we spend much of our time and energy trying to justify, defend or explain Jesus’ actions, maybe we’re missing the point. The one who really needs our support, empathy and compassion is the woman being brushed aside. But how many of us jump to Jesus’ side first instead?

Of course we will never know whether Jesus’ intentions were pure, or if he succumbed to a very human moment of intolerance. But the fact remains that we, like Jesus, should be challenged to reach beyond whatever lines we’ve drawn around our faith and the justice it claims to include those beyond the boundary.

We all have our own Canaanite women, and we’ve all been in Jesus’ position. How we respond to this story tells us less about Jesus than it does about ourselves.