Wayne is one of the guys who stays at the temporary shelter that I volunteer with most weeks. I’ve written about him before; he’s sort of an icon for me of what homelessness looks like. Wayne is big and bedraggled, long-haired and unkempt. He’s a little withdrawn and hard to talk to (at least for me), but his presence is unmistakable and his absence (when he’s absent) is noteworthy. He’s an icon for me because he’s one of those people who is, you know, iconic.

So when I hear “Wednesday, ” my first thought is Wayne, and when I see Wayne on other days, I get a little confused. And then this Sunday I was sitting in back of church when I saw Wayne walk down the aisle, settle in to the first row, turn around and wave to a friend, and start singing Christmas carols along with the entire congregation.

The trouble with icons is that they can so easily slip into caricature. Wayne had become a caricature to me–not a person. Maybe he’d always been a caricature to me. Maybe I’d never really related to Wayne human to human. Maybe that’s why I was so flummoxed by seeing Wayne do such human things as entering a church for worship, greeting a friend and singing Christmas carols. Maybe Wayne had been made flesh. 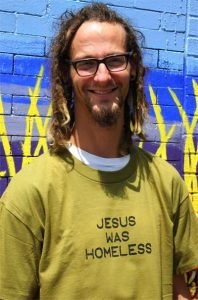 That picture above isn’t of Wayne; it’s of activist author Shane Claiborne–another flesh-and-blood person who often gets reduced to a two-dimensional caricature

When you know someone exists but don’t see them, though, you fill in the blanks yourself. That’s why Jesus was so controversial. His fulfillment of messianic prophecies didn’t register in the minds of people who watched him fulfill them. Rather than celebrate the presence of God on earth, everyone from Herod to Pilate to his friends and neighbors tried to kill him. We love our icons to the point of idolatry, and when they take on flesh and don’t match our imaginations, we don’t know what to do with them.

This isn’t just a problem for Jesus. It’s a problem for everyone, including Wayne. We prefer to think of people as the icons they represent for us, and we fail to relate to them as the people they present themselves as to us. It’s easier that way, for one; why mess with complexity when caricature is so neat and tidy? It’s also more convenient in that it doesn’t challenge our will to power. My idea of Wayne makes him the needy and me the hero, sacrificing myself on his behalf. My idea of my wife makes her the object of my affection and me the guy who loves well. If everyone around me is a caricature, then I’m the only real, whole person. In a two-dimensional world, the three-dimensional man is king.

—
David A. Zimmerman is an author and editor. His booklet The Parable of the Unexpected Guest, a thought experiment for discipleship and evangelism, was released by InterVarsity Press in September 2011.