I’m writing today on behalf of America’s Moral Movement to say that the TrumpCare you are advocating is wrong. If it passes Congress and is signed into law by President Trump, millions of Americans who are covered under the Affordable Care Act will lose coverage.

And thousands of them will die.

These are not souls whom the Lord is calling home. They are poor and elderly sisters and brothers whose blood will be on your hands if you move forward with this policy violence. For the sake of your soul and their bodies, I am writing to say that people of faith and conscience will not stand by while Congress takes people’s healthcare. When our elected representatives commit to immoral action, we have no option but to resist you by all nonviolent means available to us.

I do not write on behalf of any political party or advocacy organization, but simply as a pastor who tries to preach the gospel you claim to believe. If Jesus did anything in his earthly ministry, he provided free healthcare. Our Lord never refused to treat a leper because he couldn’t afford to pay a premium.

Given the challenges we face in providing healthcare to its citizens, some people of faith are tempted to believe that healthcare is not something government should guarantee. But Jesus said clearly in the 25th chapter of Matthew’s gospel that God will judge nations—not individuals or churches—by the degree to which we love Him by caring for the sick, welcoming strangers, and clothing the naked.

This is our responsibility as a nation, and we must support all of our elected officials in fulfilling it.

Jesus knew well what the prophets had proclaimed before him—that any form of human government bears a responsibility to promote the general welfare of its people, not merely to boost the profits of its corporations. Thus the prophet Isaiah cries out:

Doom to you who legislate evil,

who make laws that make victims—

Laws that make misery for the poor,

that rob my destitute people of dignity,

The temptation to bow to narrow corporate interests is not new. It is as old as human civilization. But the prophets have been clear, from one generation to the next, that governments, businesses and individuals have a moral obligation to care for the good of the whole.

Like Isaiah in ancient Israel, Dr. Martin Luther King, Jr. proclaimed the responsibility of nations to abide by this moral law. His prophetic ministry to redeem the soul of America is memorialized on the National Mall. But you who resisted the expansion of access to healthcare under the Affordable Care Act and now seek to replace it with Trumpcare have not heeded Dr. King. “Of all the forms of inequality,” King said half a century ago, “injustice in health care is the most shocking and inhumane.”

Like public education, access to healthcare is not a Democrat or Republican issue. This is a right or wrong issue.

It is wrong to deny poor Americans access to health care so wealthy Americans can have a $275 billion tax break.

It is wrong to push elderly Americans out of care facilities so that insurance companies can increase their profits.

It is wrong to ask poor Americans to pay more for less in the name of “choice,” while you and your colleagues continue to have the government buy you and your families the best heathcare available.

Speaker Ryan, I know you go to church and read your Bible. But your eyes have been blinded by money and your ears are plugged with privilege. As the Apostle Paul wrote to the Galatians, I’m writing to ask, “Who has bewitched you?” What principality and power keeps you from seeing the sisters and brothers this legislation will kill?

Jesus tells us that some spirits only come out through prayer and fasting. I want you to know that millions of your fellow Americans are fasting and praying for you to see the consequences of the actions you’ve proposed and hear the cries of people who will be impacted by this legislation.

We cannot stand aside. We cannot be silent. If you do not turn from TrumpCare and work to ensure access to healthcare for all Americans, you will see us on Capitol Hill, Mr. Speaker. And we will be heard.

Join Rev. Barber to take moral action on behalf of millions who could lose access to healthcare by registering now for a strategy call on Tuesday, March 14th. 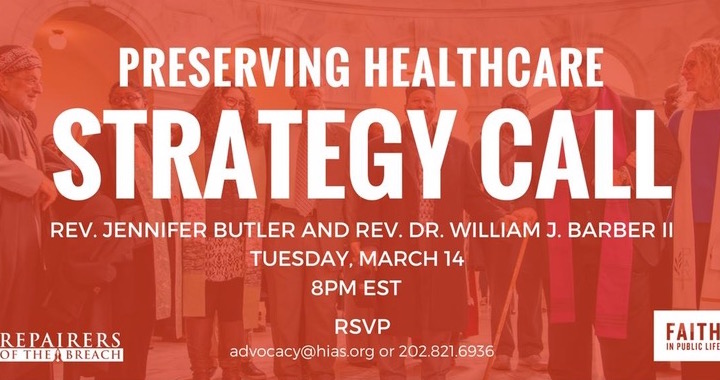