Shaheed has one tooth, zero legs and countless stories to tell.

He sits in his wheelchair holding a change cup outside of the Rite Aid on my way to work. Most passersby pay him no mind, myself included, until God called me out.

I stopped into Rite Aid for a few things on a rainy morning and quickly gave him my dismal change while shuffling back to the car. About a week later, I felt the Holy Spirit speak to my heart.

“You could have given so much more. Why didn’t you stop and talk to me?”

It was the best wake up call I’ve received. I packed up my favorite daily breakfast (two pieces of sprouted grain toast with almond butter, flax seeds and banana slices) and prepared to step out in faith.

I sat down on the sidewalk in front of Shaheed and asked for his forgiveness. I apologized for practically ignoring him a week before and asked how he was doing. Gentle and quiet yet cheerfully grateful, he accepted my breakfast and offer of prayer. We held hands, and I prayed a blessing over our new friendship.

A few days later, I took my seat at the foot of Sha’s wheelchair, and he opened up about his life, from his adoption at an early age, to an adolescence of run-ins with the law, to living with his Seventh-Day Adventist grandparents after his mother passed away.

As he spoke, a heavenly passion radiated out of him, and I sensed that Sha was telling me his story because he longs for it to be known. While making it clear that my intention was not to exploit him, I offered my videography skills. I told Sha I would be happy to record his story and share it with the world.

His face lit up.

As we celebrated this opportunity, I suggested we pray together and asked Sha to lead. He took my hands in his and gave thanks for a new friend who sees him “differently.” 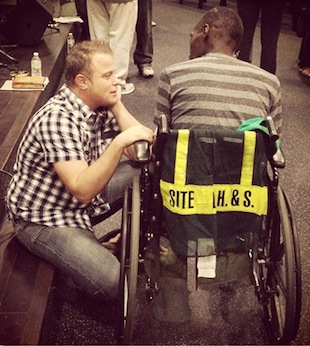 About a week ago, Sha was driven to my dad and stepmom’s home, with the joyful expectancy of starting our documentary film. After spending the night, he joined us at Shore Vineyard Church for Sunday service.

Sha smiled from ear to ear as countless church family members greeted him, praised his story and encouraged his walk with Christ. When our pastor gave him a hug and a kiss during worship, my eyes welled up with tears, knowing how much that meant to Sha.

“I’ve never experienced anything like this. I want more.”

Overcome by his contagious grin, my heart softened as I watched a man learn what love looks like.

After church, we set out with my dad to start filming in front of the Neptune, NJ house Sha grew up in. As wonderful as the weekend was up to that point, it became clear that Sha wasn’t quite himself. He looked drained and sickly. When I asked him what was wrong, he hesitated to answer.

And finally, on the curb of a sun-drenched street, the truth came out. Sha is a heroin addict.

He held his head in shame and admitted to lying about parts of his story. As easy as it would have been to react in anger, I actually grew excited. God had brought a 53-year-old homeless, handicapped, heroin-addicted black man and a 27-year-old none of those things white girl together for a purpose – what we thought was just a short film. Instead, it seemed God had paved the way for Sha’s freedom from addiction. What an honor to play even the smallest role in this!

“I’m ready because you believe in me.”

Not entirely sure what to do next, my dad and I drove Sha to Jersey Shore University Medical Center, the hospital where all four of us including my step-mom were born (isn’t God funny?). Sha remained in the Emergency Room for two days, detoxing without any medication. His assigned social worker gave me a list of numbers to call with a warning that he would have to leave the hospital. 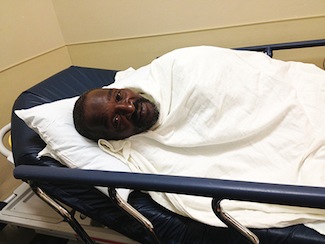 I called every possible detox/rehab number that I could find statewide. To my sorrow and stress, absolutely no one would admit Sha into a program. Some had several week-long waiting lists, some weren’t handicap-accessible. For one reason or another, it seemed every door was closing, and Sha would end up back on the street. I felt helpless.

“God, you brought all of this together. Now, we need you to make a way. You must make a way for Sha.”

While I attempted (and failed) to pull myself together at work, my dad and stepmom went to visit Sha at the hospital, only to find him sitting in the parking lot by himself. He had been discharged with nowhere to go.

My parents, who demonstrated heavenly grace throughout the weekend, brought Sha back to their house to clean up as we furiously prayed for a solution. I grabbed my tissue box for the umpteenth time as my phone rang.

“Nan (my step-mom) found needles and drugs in Sha’s pocket. We kicked him out of the house.”

My heart sank. I had spent the past two days trying desperately to help a friend who gave me his honest-to-goodness word that he wanted to be clean. And now this.

Related: What if Jesus Meant All That Stuff? – by Shane Claiborne

The police came to my parents’ house to dispose of the drug paraphernalia and decide what to do with Sha. By God’s grace alone, an officer who is “human first” offered to take Sha to the train station and pay for his ticket to wherever, rather than arrest him. And just like that, Sha was gone.

This is new territory for me. My emotions have never run this wild for a man who was a stranger only a few weeks ago. A man who has cheated death multiple times and passed on an opportunity for new life. A man who, to my complete heartbreak, has since returned to Rite Aid and started using heroin again. I can only pray that Sha seeks recovery in God’s perfect timing.

I’ve been saying over the past month that “this is kingdom stuff, ” because it is. This is the stuff of faith. I have seen things in my parents that rival anything I could ever ask of them. I’ve seen things in myself that scream true transformation.

For two years, I’ve been frantic to discover my calling as a follower of Jesus, rarely meditating on the simplicity of joyful (and sometimes nerve-wracking) obedience to His voice. I could not have relentlessly survived this experience without Christ, nor can I get through the days to come without His steadfast love. Sha is in His hands, and I cling to the hope that someday soon, he’ll come home clean. And when he does, our film will tell a new, glorious story.