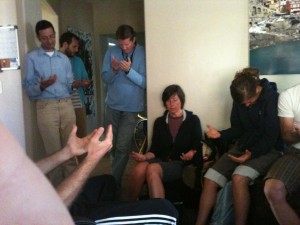 Ali is my good friend and one of my hero’s. He has taught me so much. Let me tell you about him.

Ali grew up a Shi’ite Muslim in Iran. In an effort to complete his studies as a doctor of neurology, he moved to the United States about three years ago. His whole life is in Iran; family, religion, tradition, friends, home.

After moving to New Orleans, Ali met one of the couples who are now on staff with our NieuCommunities team in San Diego. Although coming from two very different backgrounds (Iran and Washington state), they immediately connected and became close friends. More than anything, Ali became intrigued by this Jesus their lives revolved around. Within his Muslim tradition, Jesus is a prominent and highly respected prophet, but to believe in him as God is to commit shirk (holding anything/anyone as equal with Allah/God); the worst sin of all.

In fact, Ali became so intrigued by the Jesus he saw in his friends that when they moved to San Diego to go on staff with NieuCommunities, he asked if he could come with them and be part of their missional church community. After finding a neurology position in San Diego, Ali packed his bags and not only moved to San Diego, but moved into our neighborhood of Golden Hill (where all NieuCommunties participants have committed to live).

It is there that I met one of the most brilliant, yet humble and devoted men I have ever encountered. As a doctor, Ali was frequently getting published in highly respected medical journals, but as a friend he would always be the last to walk through the door. He set aside three times in his day to pray out of devotion and reverence. Anytime I saw him pray (no matter the setting) he would turn his palms face up as if opening and surrendering himself to whatever God may be speaking. For Ali, presence and devotion to his faith could be second to nothing and his life reflected that.

Although a brilliant doctor and having lived a life devoted to Islam, Ali was a humble learner who made the most of every opportunity to hear and experience the Jesus of his friends. Ali dove deep into our Christian community as he prayed, worshiped, listened and practiced alongside of us. He wanted to encounter Jesus, so he chose to expose and submerge himself deep into a band of believers whose lives had been submitted to their King, Jesus.

Ali became a very good friend of mine. Recently, I have spent a lot of time studying Islam as I seek to engage people like Ali and develop my role as peacemaker in the Middle East conflict (see this blog for more on that). Despite my occasional ignorance, Ali would listen to my questions and share insight into his sacred traditions.

Ali became my friend and dialog partner in the areas we each held most sacred. It wasn’t a competition for whose religion was more “right, ” it was a dialog of mutual respect and reverence. After all, Ali wanted to experience the truth of Jesus and he asked that we intercede on his behalf.

Through the lives and worship of his new friends and the profound work of the Spirit, my friend Ali did encounter Jesus in his time here in Golden Hill. After a recent worship gathering, Ali looked at me as said, “Yes, I am a follower of Jesus.”

Having accepted a position at Temple University in Philadelphia, Ali moved away from his new family in Golden Hill last week. While it was hard for us to say goodbye, both Ali and our community knew this was not the end of our story together.

After taking Ali surfing for the first time in his life, we all gathered for a meal just hours before his flight took off to Philadelphia. We shared the ways he had impacted us and thanked him for all that he had taught us. He came to us as a student, but his humble devotion ended up teaching us so much.

It is easy to spout out a quick prayer before a meal and quickly conclude, “In Jesus’ name, amen.” Although some of us have heard and said Jesus’ name so many times, it must not lose its sacred power and authority. Ali reminded me of that. To come before God is sacred. It is not to be done in complacency, but with reverence and devotion.

Before Ali walked out the door to catch his flight, we all turned our palms to the sky and thanked Jesus for our friend; our brother.

—-
Jon Huckins is a veteran youth pastor and public school teacher who is now on staff with NieuCommunities, a collective of missional church communities who foster leadership and community development. After much international travel and study in the Middle East, Jon focuses much of his writing and graduate studies at Fuller Seminary on ethics and social advocacy. Further, Jon writes for Youth Specialties and loves to tell and live out new stories with teenagers. His book Teaching Through the Art of Storytelling released in December ’10.  He lives in San Diego with his wife Jan, daughter Ruby and three legged dog named Harry.  Jon blogs here:http://jonhuckins.net/.  You can also follow Jon on Twitter and Facebook.