It’s not exactly headline-worthy news that many Catholics actually hold personal beliefs that don’t line up with church doctrine. It does get a little more interesting, however, when an umbrella group for 57, 000 American nuns is called to the carpet for straying from Church teaching.

Reportedly, the nuns are promoting ideas on issues like abortion and homosexuality, among others in their programs that the Church condemns.

The ladies in black and white have gotten into some hot water with the Vatican, whose representatives claim the nuns are practicing “certain radical feminist themes incompatible with the Catholic faith.”

The organization, called the Leadership Conference of Women Religious, will have a male archbishop appointed to monitor and help overhaul the group. Though it’s a major step in ratcheting down on the nuns by the Vatican, the control will, at the moment, remain at the general organizational level. 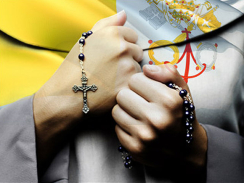 I was speaking to a Catholic friend of mine about this, and he noted that the Catholic Church may actually find itself in an intractable bind if they’re not careful. Yes, they can rewrite the group’s statutes, require approval of speakers and monitor programs at a national level. But they may have to stop short of presenting individual nuns or local orders with ultimatums that require them to shape up or get out.

For one, the nuns technically own nothing, as the money and property under their care is a part of their order. This also means that, even if nuns have jobs that draw salaries, the paychecks have always gone to the order and not to them. Therefore, nuns don’t pay into social safety net programs like social security.

So if the Church turns a nun out by removing her from her order, she is homeless. Aside from this being an ethical minefield, it’s yet another PR cobweb that the Vatican would rather avoid all together.

Second, there’s a simple matter of supply and demand. The Catholic Church has a dire shortage of nuns to maintain the convents and programs they have in place. On top of that, the average age of those nuns still serving is often above that of the typical retiree, with far fewer young women entering the orders to replace them. So at an organizational level, 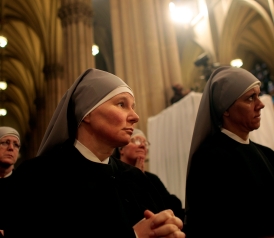 the Church faces a dilemma. If they clamp down too hard on individual women or orders, they’re likely to find themselves without an order at all.

It’s an interesting crossroads for a church already in crisis. On the one hand, we have a Pope who arguably is more of a doctrinal purist than his recent predecessors. On the other, you have one of the oldest, most powerful institutions in the world’s history facing systemic decline that could be largely aggravated by their own insistence on maintaining uniformity.

Which will win out? Perhaps the more interesting question to me is how much does it matter to the rest of the world. Yes, more than 1 billion people still claim Catholicism as their faith, but watching such infighting tear at the fabric of an already beleaguered institution may cause many of the less passionately invested faithful to drift away. It won’t likely happen with loud, media-grabbing protests or dramatic splits. Rather, the traffic out the back door will continue to increase while fewer still venture through the front entrance.

Holding fast to ideology more passionately than people is a lonely endeavor. The Catholic Church seems intent to find out just how lonely it can be.