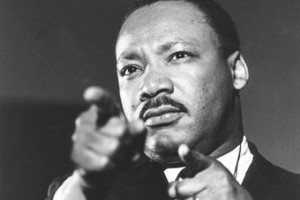 The legacy of Martin Luther King Jr and the reality of climate change are both victims of western culture’s remarkable capacity to accommodate and neutralize that which is most critical of it.

Early in the civil rights movement, Bayard Rustin said to King, “I have a feeling that the Lord had laid his hand upon you. And that is a dangerous, dangerous thing.” Similarly, the FBI once described Martin King as the “most dangerous man in America” – and yet, as Martin Luther King Jr day rolls around again in the United States, we are often presented with a figure that seems more like a cheerleader for the status quo rather than a prophetic challenge to it. Somehow, it seems we have made this dangerous figure very safe.

For instance, in a speech at the Pentagon commemorating King’s legacy, the Defense Department’s general counsel Jeh C. Johnson remarked, “I believe that if Dr King were alive today, he would recognize that we live in a complicated world, and that our nation’s military should not and cannot lay down its arms and leave the American people vulnerable to terrorist attack.”

But to claim that Dr King would be pro-war today is as likely as him being pro-segregation. After all, this is the Dr King who said, “A nation that continues year after year to spend more money on military defence than on programs of social uplift is approaching spiritual death.” And this is the same Dr King who said in his speech on 4 April 1967 (a speech that turned three quarters of American public opinion against him), “To me the relationship of the ministry [of Jesus Christ] to the making of peace is so obvious that I sometimes marvel at those who ask me why I’m speaking against the war.” And this is the same Dr King who said, the night before he was murdered on 4 April 1968, “It is no longer a choice, my friends, between violence and nonviolence. It is either nonviolence or nonexistence.”

Princeton University professor Cornel West insists that we “domesticate, disinfect, deodorise, sanitise, and make safe” the prophetic words and witness of King – a process he refers to as the “Santa-Claus-ification of Martin Luther King Jr, ” whereby we embrace a manageable, smiling, jolly fellow and abandon the man of history and his passionate call to a liberating love and a healing justice. We do to King, in other words, precisely what we have done to the radically nonviolent Christ of the New Testament.

So how can we take the legacy of Martin Luther King Jr seriously without making him in our own image? How can we, informed by his witness, confront problems he never faced without sanitising or co-opting the voice of the Nobel Peace Prize laureate who described himself as “first and foremost a preacher of the Gospel”? How can we deconstruct the hagiographies of a super-saint or “Santa Claus figure” and truly hear from this exceptional follower of the way of the cross?

Richard Stearns, the President of World Vision United States, offers an extremely helpful model for engaging Dr King ‘s legacy. In his book The Hole in Our Gospel, Stearns bravely confesses how World Vision United States nearly abandoned the call “to defend the poor and the needy” because doing so wasn’t popular. What prevented this disastrous move and encouraged him to be faithful was Stearns’s sense of history and the witness of Martin Luther King. Stearns admits he felt chastened by what King said to the church of his day:

“The contemporary church is a weak, ineffectual voice with an uncertain sound. So often it is an arch defender of the status quo. Far from being disturbed by the presence of the church, the power structure of the average community is consoled by the church’s silent and often even vocal sanction of things as they are.”

As Stearns writes, “One of the disturbing things about Church history is the Church’s appalling track record of being on the wrong side of the great social issues of the day.” Though he could have been speaking about the issue of climate change, the issue Stearns was dealing with was the AIDS epidemic.

“When it came to showing compassion to AIDS victims, culture blindness obscured our sins of apathy and judgement, just as it blinded Christians in previous generations to slavery and racism. We see this same exact pattern in God’s people in the Old Testament, condemned by Isaiah and other prophets, and again in the hypocrisy of the Pharisees, which Jesus denounced in the strongest terms. The message should be plain for us to see – history demonstrates that the institutional Church often fails to rise above and challenge the popular culture and values.”

Reflecting on church history, and inspired by the Apostle Paul’s prayer in the opening chapter of the letter to the Ephesians, Stearns suggests that every pastor, church leader, and para-church ministry leader should begin their daily devotions with the following confession:

“My name is __________, and I am blind to the injustices and sins of omission committed by my own church. Open the eyes of my heart, Lord, to see the world as You see it. Let my heart be broken by the things that break your heart. Give me the ability to see through our culture and to lead my people with Your vision, instead of the world’s.”

Now, as a Gen Y who loves and seeks to serve the church, I must confess that my generation has been quick to judge those in the past – racists, segregationists, imperialists, bigots – but slow to connect the dots between the Gospel and issues of water, food, health, economics, poverty and the land. Much like those admittedly sincere white Christians in the 60s for whom civil rights seemed like a “distraction from the Gospel, ” Christians today often display disinterest and even fatigue from all the hysteria surrounding climate change.

Many of us find ourselves implicated in the patterns of prevailing culture described by Naomi Oreskes in her brilliant book, Merchants of Doubt. As one of World Vision Australia staff member heard from his mother recently, “Why is World Vision talking about climate change? World Vision works to get children out of poverty. Not save trees!” This reveals two important realities that must not be ignored.

First, many of us fail to see what World Vision Australia sees all too clearly: climate change is hitting the poorest of the poor the hardest. Recently Tim Costello and I were in Chennai with Jayakumar Christian, CEO of World Vision India. Dr Christian told us plainly “we are already seeing the effects of climate change.” Climate change is like a giant anti-development force unleashed on the world, aimed at the poor. This is why Tim Costello has repeatedly said, “climate change will undo sixty years of development if we don’t act now.” It is also why evangelists like Tony Campolo are saying, “You can’t be a Christian and not be an environmentalist.”

Second, this demonstrates just how small and anaemic our understanding of the Gospel has become. When the Gospel is understood as sin management, or as a kind of fire-insurance for the afterlife, or self-help with a religious flavour, then it falls shamefully short of the beauty of the Biblical witness.

What our response to the ecological crisis reveals is how ill equipped our Western imagination is to understand the Gospel as good news for all of creation. Much like in the 60s, the issue was not that the Gospel wasn’t good news for the oppressed seeking racial justice and reconciliation – it’s that too many Christians were blind to see it. They were blind to the reality that the Gospel meant not only personal transformation but social transformation, just as many of us are blind to the Gospel being more than just personal and social, but ecological and cosmological as well.

Polite talk of “creation care” or “stewardship” as a kind of appendix to the Christian faith is completely inadequate. The Gospel is not that Jesus came to redeem individuals. The Gospel is that Jesus came to redeem all of creation by grace, and we as individuals, together, can be a witness to that. Our ecological crisis calls us to rediscover the earth-affirming beauty of the kingdom of God. As Nicolas Berdyaev put it, “The kingdom of God is the transfiguration of the world, universal resurrection, a new heaven and a new earth.” Or, in the words of Karl Barth, the Christian hope is that “we wait for Easter to become a universal reality.”

Climate change, like the church’s complicity with racism, calls us to repent and rediscover the fullness of the Gospel. Guided by the Holy Spirit, we must return to Scripture and reconnect what should never be separated: the doctrine of the incarnation, the cross, the resurrection and the kingdom are always connected to the doctrine of God’s good creation. To care about the poor is to care about climate change. To care about climate change is to care about the poor. And the Gospel of Jesus Christ, when seen in all its redemptive splendour and beauty, is good news to both!

The year prior to his assassination, Martin Luther King was asked by a reporter whether he was going to hurt the budget of his organisation by the stance he had taken on the issue of war: “Aren’t you hurting the civil rights movement and people who once respected you because you are involved in this controversial issue?” As he related to audiences later, Martin Luther King said that he looked at that reporter and, with deep understanding and no bitterness in his heart, said:

King would go onto say:

Dr King would write from Birmingham Jail that, regarding civil rights, “The judgement of God is upon the church as never before.” Today I believe those words are just as applicable to the church regarding climate change and how it affects the poor. To stand with the poor and take real action on climate change might not be safe, nor politic, nor popular. But the dangerous witness of Martin Luther King Jr calls us to dare to go the way of the cross, because, in the words of Dr King, conscience tells us it is right.

This article was originally published on abc.net

—-
Jarrod McKenna the National Adviser for Youth, Faith and Activism for World Vision Australia. He is the founder of EPYC and co-founder of the Peace Tree Intentional Community in Perth. You can follow him on Twitter here.