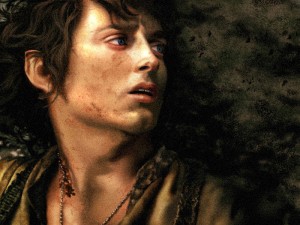 I can’t be trusted with Christian fiction.

When my fifth grade teacher, Mrs. Kraakevik, read our class C.S. Lewis’ Chronicles of Narnia, the only meaningful connection I was able to make was that Aslan was a lion, the lion is the king of the jungle, and Jesus is king of the world.  The rest was lost on me.  Weak, right?

About that same time my brother was devouring J.R.R. Tolkein’s Lord of the Rings trilogy. From the bit of the book I read my tenth year, I gleaned that the Hobbit guy had some big job to do that involved a ring, like some little shiny-shoed tuxedoed wedding day ring-bearer.

For the life of me, though, I couldn’t understand—with the notable exception of the resurrected jungle beast—what made Narnia and Middle Earth, those weird lands of British make-believe, particularly Christian.   Those creative religious interpretations always felt to me more like an Emperor’s New Clothes situation.  I secretly suspected that some religious person had tried too hard to find religious themes and we had all just religiously gone along with the whole charade.

That’s how I framed my gaping void of literary insight.

Never once did it occur to me that these stories of daring actors might be describing not only what is true of Christ but also what is true about the ones who would respond to his voice, pick up their crosses, and follow after him.  It didn’t cross my mind that Frodo, Samwise, Lucy and Peter might be anything more than interesting fictional anomalies.  I hadn’t considered that they might, instead, be types of the regular kind of Christ-life which is patterned after Jesus.

What if it’s the rule?

A peek at the exploits of Jesus and his friends hints that it might be.  Though no one passes through a magic wardrobe, the Christian’s passage through death-dealing baptismal waters initiates him or her into an entirely new way of living.  And though no one waves goodbye to the family and friends being left behind in a shire, the lives of the earliest disciples were disrupted and transformed by discipleship.  A number of guys do jump out of their fishing boats to follow Jesus. Levi leaves his tax booth to get in on the adventure.  In fact, this motley crew takes up Jesus’ own mission to bring good news to the poor, proclaim release to the captives and recovery of sight to the blind, to let the oppressed go free, and to proclaim the year of the Lord’s favor.  (Luke 4:18-19, NRSV)  In both word and deed, that’s the adventure which they embraced.

Today, those who will bear Jesus’ word, love, and reign are still the vessels God is using to redeem the world.  Tom Sine, in The Mustard Seed Conspiracy, observes, “It is still God’s policy to work through the embarrassingly insignificant to change his world and create his future.  He has chosen to work through the foolishness of human instrumentality.  And he wants to use your life and mine to make a difference in the world.”  (MSC, p. 12)

God’s big plan is actually a little plan.  God uses the teeny tiny mustard seed of love, offered by folks like you and like me, to accomplish his purposes for a world in need.  We’re the vehicles by which Jesus’ ministry is being expressed today.  In fact, the unfolding of God’s beautiful story of Jesus-redemption in a world in need actually depends on hobbits and centaurs and children and other unlikelies, like me.  And you.

Margot Starbuck is a communicator who writes and speaks about kingdom living, God’s heart for the poor, body image, edgy love & other fresh ideas.  She’s convinced that because God is with us and for us in Jesus Christ, Christians are set free to live love that is for others, especially those who live on the world’s margins. This is kind of Margot’s big thing.  Margot lives in the Walltown neighborhood of Durham, NC, with her husband, Peter, and their three kids by birth and adoption.  At Reality Ministries, she shares life among friends with and without disabilities.  A graduate of Westmont College and Princeton Seminary, Margot is ordained in the Presbyterian Church USA.