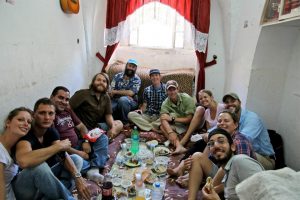 Hebron is known as one of the most volatile cities in the whole region of Israel/Palestine.  Located in the heart of the West Bank, both Jews and Arabs have had roots here for thousands of years.  Having endured years of conflict, racism, violence and separation, Hebron’s inhabitants have been covered in a narrative lacking an acknowledgment of a shared humanity.

It’s in the middle of such realities that our Learning Community (part of our organization,  The Global Immersion Project) feels called to listen, learn and be radically present.  Through the art of friendship making, shared tables and storytelling, we desire to promote the just heart of God by being a people of reconciliation in the way of Jesus.

It was this posture that landed us in the underground home of a local Muslim Palestinian family who is close friends with the Jewish Rabbi who was hosting us in the old city of Hebron (he is both a host and dear friend!).  Having prepared a beautiful and expansive Palestinian meal, they warmly invited each one of us into their home and said, “Today, this is your home.”

Hebron is home to the Tomb of the Patriarchs, namely, Abraham.  It is important to note that all three monotheistic faiths (Judaism, Christianity & Islam) acknowledge Abraham as their father/patriarch.  In other words, this is the physical place where religions not only collide, but the physical place where they share a very unique familial identity. 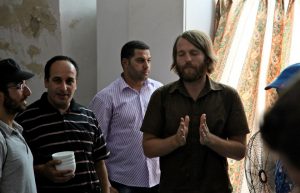 Standing between my friends — a Muslim Palestinian and Jewish Rabbi — I prayed that this meal would be a picture of reconciliation found among the children of Abraham, because as a follower of the pro-people Jesus who came to bring restoration to all the cosmos, I have to belief this to be true.

For me, it was a thin place; a place where heaven and earth were only thinly separated.  It was a microcosm of how humanity can interact when the best of all three monotheistic faiths are represented. Further, as one who has given my life to the work of peacemaking and reconciliation, it was a moment and honor I will never forget.  In fact, it will fuel me to live more faithfully into the identity I have been given as one submitted to the life and teachings of the Prince of Peace in obedience to the great Reconciler.

Sitting (on the floor!) around a table with people from all over the world and experiencing radical peace in a context whose reality is often the opposite, I got a glimpse into the heart of Jesus for humanity. A humanity he so adamantly sought to highlight by being a presence of peace and reconciliation among people and in places that weren’t “supposed” to experience either.

Friends, the construction of “The Other” is quickly dissolved when we enter each others’ homes & share a table.  We confront and acknowledge our common humanity. This is not only true in the Middle East, but in the neighborhoods, cities and suburbs in which we inhabit everyday.

May we be a people who instigate a revolution of shared tables that offer a foretaste of the Kingdom banquet being prepared by the Resurrected refugee from Palestine, Jesus.

—-
Jon Huckins is on staff with NieuCommunities, a collective of missional communities who foster leadership and community development.  He also co-founded The Global Immersion Project which cultivates difference makers through immersion in global narratives.  Jon has a Master’s degree from Fuller Seminary and writes for numerous publications including, theOOZE, Burnside Writer’s Collective & Red Letter Christians. He has written two books: Thin Places: Six Postures for Creating and Practicing Missional Community (Beacon Hill) and Teaching Through the Art of Storytelling (Zondervan).  He lives in San Diego with his wife Jan, daughter Ruby. Jon blogs here: http://jonhuckins.net/.  You can also follow Jon on Twitter and Facebook.