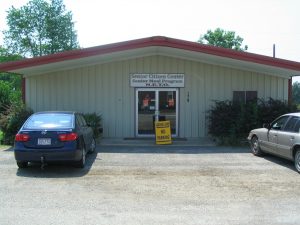 My husband David and I retired early last year to a small town in East Texas called Emory. There’s not a lot of excitement in Emory, but there’s always something to do. We recently joined a work party to paint the inside of the Senior Center here. It’s an older building that has been well used and was in need of a face lift. The director secured a small grant for materials, but she didn’t have enough money to cover labor costs. Our church is always on the lookout for “Outside the Building” projects, so David and I stopped by the pastor’s office to discuss the possibilities. A couple of phone calls and a visit or two later, David was asked to head up the project and a call for volunteers went out.

As we pulled into the parking lot on Friday morning, we were a little nervous. The carpet was scheduled to go in Monday, so it was critical that we get the painting done in a couple of days. The Center isn’t huge, but it would be a huge job for two people. What if no one else showed up?

We shouldn’t have worried. When we arrived several people were already at work. A Center employee had coffee and ice water ready, and a couple from the church was masking the baseboards. While one of the Center’s clients removed nails and screws from the walls, others drifted in, looked around for a job, and started to work.

We had a total of 11 volunteers, and we worked together well. Some cleaned while others prepped. Those with steady hands trimmed while those of us who are messy used rollers.  The tall ones painted the high sections, while those of us who are height challenged painted the lower sections. We moved seamlessly from one room to the other, from one task to the next, and before anyone had time to get too tired or cranky, the painting was done and clean-up was in progress. David thanked everyone profusely for their help, and we were home in time for a late lunch.

Looking back on the experience, I wondered what motivates people to volunteer for a difficult, messy job like painting the Senior Center. Some of us, like David and me and the man who was taking down the screws and nails, have a vested interest. We eat lunch and socialize there, and it will be a more pleasant experience now. But most of the workers had never been inside the Center, and several won’t be eligible for its services for another decade or two. All of them gave up several hours of their time, and some even took off work. Why would they choose to pick up a paint brush; what was in it for them? Is it the simple satisfaction of a job well done, or is there more to it than that? 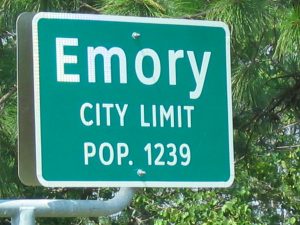 As a society, we seem to have developed a strong sense of division of labor in a lot of areas of our lives. At work we’re very conscious of what we’re being paid to do and what is above or below our pay grade. At home, children and adults alike argue over whose job it is to take out the trash or do the dishes, and the media loves stories about the constant battle of responsibilities between government, school, church, and family. So what makes a person choose to do something for which they receive no measurable benefit?

When I was growing up, that question would be answered by quoting scripture: “Do to others as you would like them to do to you, ” and “When you did it to one of the least of these my brothers and sisters, you were doing it to me.” Quoting the Bible is not as politically correct as it once was, so now you hear phrases like “random acts of kindness, ” “paying it forward, ” and “doing the right thing.” There is plenty of material that tells us we should be helpful and charitable, but I don’t have a clue what moves us to take that step forward and say “I’ll do it.”

There’s another verse in Ecclesiastes that says something like “Whatever your hand finds to do, do it with your might.” I’ve always taken that verse to mean, when you have a job to do, do it well. I still think that’s a valid interpretation, but what struck me this morning was the first word, whatever. What that says to me is when you see a job that needs doing, whatever it is, whether it’s your job or not, do it and do it well. Maybe that’s what sparked those volunteers at the Senior Center and all the others who are paying it forward or helping the least of these. They saw a job that needed doing and decided it was their job.

The church bulletin said there are several other Outside the Building projects in the near future and that we should contact the pastor for more information. I guess when I finish writing this, I’ll send him an e-mail and see what else my hands can find to do.