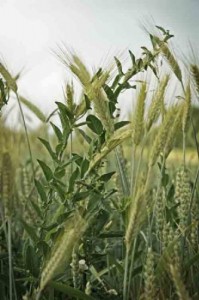 Those who would discourage us in our attempts to work for social justice and end poverty and oppression claim that “the world is getting worse and worse every day, and one of these days very soon the world is going to become so evil that Jesus will have to intervene with the Second Coming.” Hence, they cheer the degradation and the growth of evil in the world. This goes along with the kind of theology that emerges from the likes of Tim LaHaye in his “Left Behind” series, and Hal Lindsay in his book The Late Great Planet Earth. Such thinking eliminates hopes for restoring God’s creation today and instead forces the follower of Christ to look forward only to the life to come with no hope for the world today.

It is a good idea to reject such dismal predictions of the future and get our eschatology from Jesus.

In Matthew 13, Jesus speaks in a parable giving a clear description of the developments in society and how history will end. He declares that a certain man plants wheat which is representative of the kingdom of God. Jesus then goes on to say that the evil one (Satan) comes and plants weeds (sometimes referred to as tares) in with the wheat. In the parable, Jesus goes on to say that the wheat and the tares begin to grow up together and the servants of the master come and ask, “Shall we try to pull out the weeds?” The master says, “No, if you pull out the weeds (the tares), you will destroy a good proportion of the wheat.” The master goes on to declare that the wheat and the tares should be allowed to grow up together and at the end—at the harvest—the wheat and the tares shall be separated from each other and the tares shall be cast into the fire.

What Jesus makes clear is that on the one hand evil is alive and growing more pronounced in the world. It is more evident in society than ever before, and the trends that one discerns by reading the newspapers give all the evidence that we need that the demonic is at work in the world with frightfully successful results.

On the other hand, it should be noted that the wheat (the Kingdom of God) is also growing. In response to those who see the world getting worse and worse, I say, “Take a good look at what is happening to the Kingdom of God. Twenty-five years ago, 80 percent of the earth’s population was illiterate; today that number is down to 20 percent. Twenty-five years ago, one out of every six persons on the earth had no access to clean drinking water; today it is one out of twelve. Twenty-five years ago, 45, 000 children died every day because of diseases related to malnutrition, lack of medicine, and just plain starvation; today that figure is down to a little over 13, 000.”

When it comes to church growth, one has to admit that in the United Kingdom and in the United States we see the Church hemorrhaging its members, but also consider what is happening in other parts of the world. In Latin America, Pentecostal revivalism is sweeping the continent. In Africa, 50, 000 new members are added to the Church every week.

The largest church in the world is not in California, but is in Seoul, Korea. Yoido Full Gospel Church has over 1 million members, and in seven services every Sunday, over 25, 000 individuals show up to worship God in each service. In 1945, there were 900, 000 Christians in the People’s Republic of China. Today there are 77 million Christians there.

The Church will not limp out of history as the battered, beaten body of Christ. Instead, it will march out of history triumphant, and the kingdoms of this world will become the Kingdom of our God. Yes, evil is on the rise, but so is God’s Kingdom and the work of the Church; and one day, someday, as the parable that Jesus teaches in Matthew 13 declares, there will come an end to history and Jesus will return, and when that happens the evil of this world will be subdued and the Kingdom and its people will be lifted up.