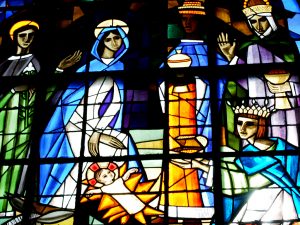 This is part four of a five part series on Jesus and Nationalism.  It reads as one fluid written sermon so you may want to read the rest of the series.  I have never spoken this sermon but figured I would use the blog to get the text out there…

Now lets turn back to Luke chapter 2 for a moment.  We started with a question about if Caesar Augustus is important to the story that Luke is trying to tell us about Jesus’ birth.  What do we know based on verse 1 of this chapter?  We know that the great Emperor has decreed that the whole world must be counted.  This was an effort to make sure that the taxes could be taken with greater accuracy.  For those in Judea, like the parents of Jesus, this was simply a reminder of the poverty and suffering of their people because of the Roman Empire.

And think about Caesar Augustus again.  Remember the announcement about his birthday that we read earlier that dated to 9 BC?  Lets look at it one last time and see if anything starts to come together for us about the first birthday of Jesus.

The birth of Augustus is considered to be a new era.  His birth is one that changed the course of human history.  He is born as a human, but is simultaneously a god on earth.  His life is the beginning of “good news.”  Lets keep reading.

…Who being sent to us and our descendants as Savior, has put an end to war and has set all things in order; and [whereas, ] having become [god] manifest (phaneis), Caesar has fulfilled all the hopes of earlier times…

So, lets get this straight.  Augustus is the long awaited “Savior” who has brought peace to the world by putting “an end to war.”  So, if we put this all together we find that Augustus who claimed to be the “son of god” (as we discussed earlier) is the “savior” who brings “good news” of peace.  Where have I heard that before?

But the angel said to them, “Do not be afraid; for see—I am bringing you good news of great joy for all the people: to you is born this day in the city of David a Savior, who is the Messiah, the Lord…  And suddenly there was with the angel a multitude of the heavenly host, praising God and saying, “Glory to God in the highest heaven, and on earth peace…”  Luke 2.10-11, 13-14 (NRSV) 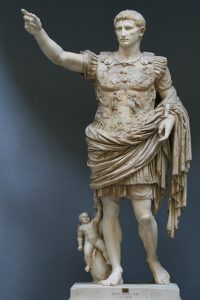 5 In your relationships with one another, have the same attitude of mind Christ Jesus had:

6 Who, being in very nature God, did not consider equality with God something to be used to his own advantage;

7 rather, he made himself nothing by taking the very nature of a servant, being made in human likeness.

8 And being found in appearance as a human being, he humbled himself by becoming obedient to death—even death on a cross!

9 Therefore God exalted him to the highest place and gave him the name that is above every name,

10 that at the name of Jesus every knee should bow, in heaven and on earth and under the earth,

11 and every tongue acknowledge that Jesus Christ is Lord, to the glory of God the Father.  Philippians 2.5-11 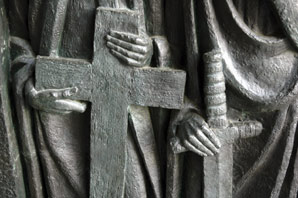 The humble baby who chose to die on the Roman cross has been enthroned as the world’s true Lord!  Caesar wanted to be the lord and master of the whole earth, but couldn’t come close to Christ.  In a sense, when Paul says “Jesus Christ is Lord…” it is as though he were saying in the same breath “…and that means Caesar isn’t!”  Jesus is king, and notice what this passage reveals to us about nations of the world.  People from every kingdom of this world will confess Jesus’ lordship, not simply the nation that I happen to hold in high regard.  That means that Americans, Iraqis, Afghanis, Native Americans, Asians, Capitalists, Socialists, Communists and every other “i-s-t” or “i-s-m” will be represented before the throne of Jesus.  All that will matter on that day is if we lived as “God’s image bearers” and gave him back his due: our lives for his Kingdom.

WHAT DOES THIS SAY ABOUT THE CURRENT NATIONALISTIC TENDENCY AMONGST EVANGELICALS AND OTHER CHRISTIANS?  IF OTHER NATIONS WILL BE REPRESENTED AT THRONE OF JESUS, WHAT ABOUT WHEN AMERICAN CHRISTIANS KILL OTHER CHRISTIANS WHO HAPPEN TO FIGHT FOR THE OPPOSING MILITARY?  OTHER THOUGHTS OR SCENARIOS?

Look for the last post in the series TOMORROW!

Kurt Willems is an Anabaptist writer and pastor who is preparing for church planting next year by finishing work towards a Master of Divinity degree at Fresno Pacific Biblical Seminary.  He writes at: the Pangea Blog and is also on Twitter and Facebook