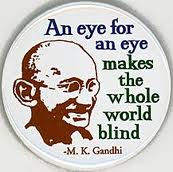 As the Red Letter Christian movement came to be known, I realized it would never be accepted.  This is because many Christians don’t really like the God that is revealed in Jesus Christ.  They want the God that is in the black letters.  He is the God that legitimated war and many Christians feel more comfortable with war than they do with a God who tells them to love their enemies and to overcome evil with good.

Many Christians believe in retribution.  They want a God who tells them that there should be an eye for an eye and a tooth for a tooth, and they become furious when anyone suggests another kind of God who asks them to be merciful and forgiving.  The God of grace is not to their liking.  Instead, they want a God who punishes people tit for tat, and even beyond that, they want a God who will provide infinite punishment for limited sin.

The God revealed in Jesus Christ is far too generous.  He gives His all in love for others, and expects us to do the same.  Such a God is too demanding for most Christians.  They want one that only requires a tithe.  They sing about total self-giving, but in the end they would like to sing, “One-tenth to Jesus I surrender, one-tenth to Him I gladly give—I surrender one-tenth, I surrender one-tenth.”  Ultimately, they want a God who declares as an abomination all of those who offend their social mores.  They don’t like the God who touches lepers, embraces Samaritans, declares women equals, and has the audacity to say to gays, lesbians, transsexuals, and bisexuals, “Whosoever will may come.”  They don’t like the God that is revealed in those red letters of the Bible because Him embraces those whom they want to reject.  They prefer the God of the black letters so evident in the Hebrew Bible, the God who declares certain races unclean and would render women who are menstruating as unacceptable in the house of worship.

They want a God who, when they march off to war, will be on their side and they reject the God revealed in the red letters who warns that those who live by the sword will die by the sword.

When we stumbled upon calling ourselves Red Letter Christians, we should have expected the reaction that we got because most Christians feel more comfortable with a God that is like most of us—vengeful, judgmental, and ready to mete out torture to those who do not conform to expectations—torture that goes on forever and ever.  The God revealed in fullness in the Jesus we find in the red letters is not to their liking at all.

The Bible says that God created us in His own image.  Unfortunately, George Bernard Shaw was correct when he said, “We have decided to return the favor.”  There is no doubt that most Christians want a God in their own image, but that’s not the God who is revealed in Jesus Christ.  He is not an American who would carry within his psyche all the traits of judgment and prejudices so evident among those who want nothing to do with the God who breaks loose in the Sermon on the Mount.  He is not the God of Jonathan Edwards, who preached “Sinners in the Hand of an Angry God.”  Instead, the God of the red letters is the God that we find in the Beatitudes.