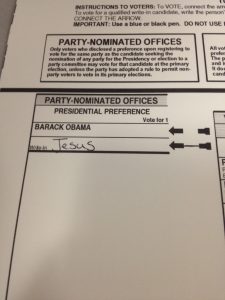 Why I voted for Jesus instead of Obama in the primary…

Because, obviously, President Obama is uncontested during the primary election so nothing is actually on the line by writing in a candidate like Jesus.

Because as a registered Independent, I’m not allowed to vote in the Republican primary contest.

Because, Jesus is the only president (King) worth voting for, not just in a ballot box, but every day of my life.

Because although President Obama’s rhetoric is less militant than the Republican Right, his actions these past four years have proven otherwise.

Because Jesus is the only just Ruler, not only of America, but of the entire cosmos.

Because I wanted to make a statement about my ultimate allegiance.

Because I’m becoming less and less convinced that participating in the system actually produces any measurable results.

Because left and right are both mirages clouded by media hype, the demonizing of the other, empty promises, and mere parodies of a just society under the rule of Christ.

Because I sometimes need a tangible reminder that the politics of Jesus ought to be part of my life and the lives of those I’m in community with – both now and in my church planting project to come.

Because Jesus as President requires that I live a certain way, that I become a certain kind of person, transformed by his Spirit to become the kind of good I desire to see in this world. Politics of the American Empire require marking a ballot every other year and arguing endlessly on the internet about policies I have very little influence over.

Because I always vote for the “lesser of two evils” in the presidential election, and presented with only “one evil” I felt it necessary to seek the better alternative… in this case, an alternative that overcomes all evil: Christ.

Because… I wish to remind my friends on any end of the political spectrum that we must always speak the truth in love to power, even if we agree with some of what it represents.

And finally, because I pray that all of my sisters and brothers will “seek first the Kingdom of God and his justice” realizing that all nations are under the influence of Satan in this present age, even the United States. Therefore, lets do what we can to influence the system, but not waste our lives on a utopian dream that simply having more or less government will solve the world’s ills. Our nation, like every other nation, is founded on self-interest, the opposite of our King who founded his Kingdom on self-giving Calvary-like love.

Obviously, I’m influenced by a number of things, including Jesus for President by Claiborne and Haw.

PS – To be clear, I didn’t go to the voting booth just so I could write in “Jesus” on a ballot. I went because I wanted to vote for propositions and other issues, the president thing was incidental.