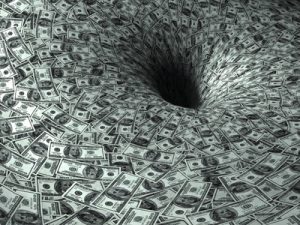 For almost fifty years, the federal government has spent more (often much more) than it took in.  Continuing that pattern for another ten or twenty years would lead to economic disaster.

But the problem is not merely financial; it is also immoral, as we see in the two political proposals for the 2012 national budget.

The budget proposed by Paul Ryan, chair of the Republican budget committee, flunks the test of justice for all by providing tax cuts for the rich at the expense of effective poverty-reducing government programs. This federal neglect of “the least of these” (Matthew 25:40) defies biblical principles of justice.

The Obama budget flunks the test of intergenerational justice by rightly preserving programs for the poor, but failing to provide a path to a balanced budget.  We dare not indefinitely increase the national debt which future generations will be required to repay. To continue indefinitely borrowing vast sums for current expenditures is like grandpa using his grandchildren’s credit card for things he cannot afford—it is intergenerational injustice.

So, what should we do?

We can start by returning to biblical principles.

A right view of justice. Contrary to what many believe, biblical faith does not demand equality of income and wealth.  Wrong personal choices, creative genius and hard work all rightly lead to economic inequality.

But the biblical teaching on the land does provide a significant norm for economic justice.  Israel was an agricultural society so land was the basic capital that enabled people to create wealth. When the Israelites moved into Canaan, God told them to divide the land so that every family had enough to earn a decent living. Every 50 years (Leviticus 25), the land returned to the original owners no matter why they lost it. The prophets declared judgment on powerful people who took the land of the poor, and also predicted that the Messiah’s coming would enable each person to reclaim their own land (Micah 4:4).

The biblical teaching on the land provides an important principle for economic justice: God wants every person to have access to the essential capital so that if they act responsibly, they can earn a decent living and be dignified members of their society.

The role of government. Biblical theology and practical experience together show that combating poverty is a task that must be done by every level of society: family, churches, non-profits, businesses and government.

In fact, it is flatly unbiblical to say the government has no legitimate role in fighting poverty. The Bible repeatedly affirms that God wants the king to “maintain justice and righteousness” (Psalms 72:1).  These two Hebrew words refer to both fair courts and just economic outcomes.

Additionally, basic economic facts underline the importance of a governmental role in combating poverty. Tens of thousands of private programs provide important food assistance each month.  But altogether they only provide 6 % of the total monthly food assistance; government provides 94% each month.  There are five major federal government poverty-fighting programs. If the 325, 000 religious congregations nationwide decided to take over these five programs, each congregation would need to increase their annual budget by $1.5 million.

The role of the individual. We are neither isolated individuals as Ayn Rand suggests nor cogs in a collective machine as Marxists insist. Rather, we are free responsible individuals who can become what the Creator intended only in community. Scripture is clear in its call to love our neighbors as ourselves, and carry a special concern for the poor in recognition that God measures societies by what they do to the people at the bottom.

When committed Christians dedicate themselves to political advocacy, seemingly impossible things happen. Evangelical Member of Parliament William Wilberforce changed the course of history by working for thirty years to abolish the slave trade.  South African Archbishop Desmond Tutu succeeded in helping end apartheid.  Solidarity, the daring trade union in Poland, defied the Communist rulers and contributed to the collapse of the Soviet Union.

Today, we can join their ranks. We can demand a just solution to our budget crisis by echoing the Evangelicals for Social Action in their “Call for Intergenerational Justice.”

“To the young, we say, it is your credit card that will receive the additional trillions of dollars of debt – unless we quickly end ongoing federal budget deficits.  To parents and grandparents, we say, we must give up some things so our children can flourish.  All of us now say, we join together to answer the call to intergenerational justice.”

This post is an excerpt from Ron’s new book, Fixing the Moral Deficit.