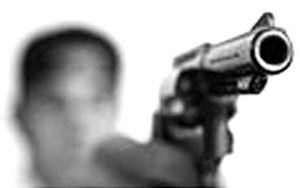 As a Christian and a Teaching Elder in the Presbyterian Church (USA) I often struggle with Scripture and how God intends for me to live in the world. Jesus and our faith demands of us to make difficult decisions in life that often stand firmly against our own upbringing, our own wants and, at times, our friends and family.

I believe that, today, the question of gun ownership and fighting gun violence is one of those times.

Trust me, I do not wade into the topic of guns lightly. After posting on this topic here and here, I am fully aware of the passion with which people approach this issue and the subsequent conversations about it. While some would say it would be wiser and even safer to avoid such engagement, I disagree. For if I, as a Christian, cannot find a way to engage in healthy and helpful conversations with those  who disagree with me, Christian or not,  then, I am abdicating my responsibility to live the kind of life that I believe God hopes for me to live in the world.

Still, I know that there will be some immediate reactions by many who might react to any opinion that seems anti-gun, so let me try to pre-empt some of the obvious pushback that is likely to be directed my way.  I have no delusions that commentors will, in fact, read this blog before commenting, but for those of you who do and are interested in fruitful conversation, know this . . .

Gun ownership, gun violence and gun control are obviously not new debates in our nation. At the same time, I do think that the ideological,  philosophical and theological foundations that give structure to the arguments about guns in our culture are beginning to manifest themselves in ways that are tearing apart the social and cultural understandings that have brought this country together for a very long time. In the name of free speech, we are experiencing a rise of violent political rhetoric; in the defense of freedom,  personal interactions are increasingly tinged with violent posturing; and  recent shootings – mass or otherwise – are creating a fatigue that further normalizes gun violence in our culture.

As a Christian, a pastor, a father, a citizen of the United States and member of the larger global community, this is not an acceptable reality, nor does this align with the many ways in which I believe Christ calls us to live. There is much in the teachings of Christ that offer me pause, but in the case of guns, any way I look at the questions of owning a gun and the risks involved to the larger community, it is abundantly clear to me why I will never own a gun.

Also by Bruce: The Church’s Doomed Pursuit of the Elusive Young Adult

I first begin with my place in the greater community. I choose not to own a gun and provide an opportunity for the violence that so often accompanies guns because this is how I would hope others would be in the world. Yes, many will label me a fool and accuse me of creating an atmosphere of inviting gun violence into my life, but when it comes to faith, my actions, while defying logic to many in the world, is an expression of my deep commitment to God.

36 “Teacher, which is the greatest commandment in the Law?”

Secondly, nowhere in Scripture does Jesus give us permission to solve our problems, respond to aggression or even defend ourselves with violence. In word and in deed, we are often called to fight injustice and violence with words and actions that are distinctly NOT violent, even in self-defense. Turning the other cheek, defending with a sword,  stoning of the prostitute, etc, Jesus reminds us of other powerful ways to respond to those who would chose to goad us into violent conflict. Yes, we do those things out of self-survival and self-defense, and justified by society or not, viewed through a lens of the Christian faith violence of any kind cannot be justified.

17 Do not repay anyone evil for evil. Be careful to do what is right in the eyes of everyone. 18 If it is possible, as far as it depends on you, live at peace with everyone. 19 Do not take revenge,  my dear friends, but leave room for God’s wrath, for it is written: “It is mine to avenge; I will repay, ” says the Lord. 20 On the contrary:

“If your enemy is hungry, feed him;
if he is thirsty, give him something to drink.
In doing this, you will heap burning coals on his head.”

21 Do not be overcome by evil, but overcome evil with good.

People may call this approach to faith and life absurd, weak or out of touch, but this is where my Christian faith leads me to stand and I consider this posture of non-violence in word and deed, to be one of power,  transformation and graciousness. Again, because this is where my faith leads me, does not mean that I think any less of those who decide that gun ownership aligns with their faith, only that I have chosen differently.

I believe is that at some point, people of faith must stand side-by-side speaking together to let the world and one another know that there is a different way to live and respond to that which may threaten us . . . and it is one that does not involve guns, so if you would like to add your name to a “petition” is support of church leaders everywhere who are engaged in important work against gun violence, please sign sign and share This Petition:  Christians Standing Together Against Gun Violence.

—-
Bruce is a native Northern Californian and third generation Chinese/Filipino who has been living in San Francisco since 1998.  Until May, 2011 he was the founding pastor of Mission Bay Community Church, a church of 20/30-somethings in San Francisco, CA and from 2008-2010 was Moderator of the 218th General Assembly of the Presbyterian Church (USA). He is currently one of those “consultant” types who makes his way, writing, speaking, teaching and drinking coffee. His social networks of choice are  Twitter,  Facebook and his Blog

This article originally appeared on Bruce’s blog at Patheos.com