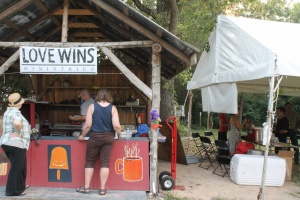 By now, you have probably read about the Wild Goose Festival. You have heard about the big name speakers, you were told about beer and hymns, you know about the dunk tank and the killer music and the ticks and the scorching Carolina heat.

But, awesome as all that was, it all pales in comparison to my memory of a late night conversation at the Goose with my friend Mike.

You see, Mike is one of about 1, 200 people in Wake County, N.C., who are currently without housing. Some nights he lives at the shelter, other nights he couch surfs with various friends, and some nights he sleeps in the dumpster of that downtown church with the $2 million pipe organ.

Mike is one of our volunteers at Love Wins Ministries, our little ministry of pastoral care and presence to the homeless community in Raleigh, N.C. And yes, he is currently homeless. But Mike still volunteers with us, because where you live does not decide your value or define your ability to contribute.

So, when I mentioned to Mike that we were running a booth at the Wild Goose Festival and I wanted him to come as our guest and help us run it, he was skeptical.

“These are church folks, right?” Mike said. “I don’t do church folks well. You know that.”

I did know that. In many hours of talking to Mike over the past few years, he has told me tales of horrible religious abuse; of being denied food because he had not said the appropriate prayer, of being evicted from the gospel mission because he missed chapel service because the bus ran late, of being thrown out of storefront churches when he asked the wrong questions.

But I also know that he is always in our chapel service, singing with gusto, if not on key. And he is always the first to volunteer to show someone new around our small ministry house, whispering to them, “Don’t worry. This place is safe.”

So, last Thursday morning we packed the car with tents, sleeping bags and coolers and set off for Shakori Hills, a plot of farmland in rural North Carolina and the site of the second annual Wild Goose Festival.

Mike is a blur of activity the whole weekend. When he wasn’t working the booth, he was in conversations with the most random of people — at various times talking to musicians, roadies, preachers, teenagers, and an appliance salesmen.

We gave him a small stipend each day so he could buy the food he wants from the vendors, and mealtime finds him sharing a table with yet more folks … asking them about their stories and sharing a bit of his. He was constantly bringing people who wanted to know more about us and our work by the Love Wins booth, mainly because Mike told them they have to meet us.

On Sunday afternoon, I was scheduled to be one of the presenters. Mike sat in on my talk, where I deconstructed the St. Francis conversion legend in a bit I call “What’s in it for the leper?”

That night, Mike and I sat outside our booth in folding canvas chairs, both exhausted after four long days in the hot Carolina sun. Overstimulated, dusty, drained, empty; we just sat as dusk descended and watched the festival wind down in front of us.

“You know that leper in your talk, ” Mike asked. “I’ve been that guy. The guy the church avoids, or, if they want to talk to me, it’s only to heal me.

“But here, this weekend, I’m not a leper, ” he said. “Here I matter to folks, and they matter to me. Here I get to be part of something beautiful, and nobody stops me from helping because of who I am or where I sleep. I am so glad I came. I like this. I like this a lot.

“And, ” he said with a sideways smile, “I also like the beer and hymns. Maybe if we did that in chapel, our attendance would grow.”

And we both busted out laughing, as the crickets and distant sounds of music and conversations joined us, creating a holy noise that ascended into the heavens, offered up as late night prayers.

—-
Hugh Hollowell is a minister in the Mennonite Church USA based in Raleigh, N.C. He is the founder and director of Love Wins Ministries, which tackles the problems of homelessness by focusing on relationships, not outcomes.