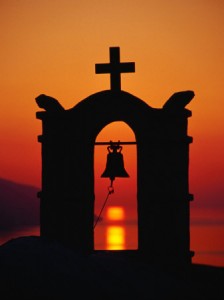 The English missionary C.T. Studd said, “Some want to live within the sound of a church or chapel bell; I want to run a rescue shop within a yard of hell.”

An admirable conviction! I have friends all over the world who are living that way, and I’m in awe of their perseverance. Courageous and faithful, they serve the poor, heal the wounded, and care for the least of these from Belize to Thailand to Zimbabwe and hundreds of places around the world.

Of course, in his day C.T. Studd was talking about an actual geographic location: far from the Christian world where church bells are never heard.  This reminds me of the Islamic scholar Ibn Battuta who in 1330 was visiting Crimea and heard church bells for the first time.

Not knowing what they were, and assuming they were something Satanic, he sent people to read the Koran from the minaret as a spiritual counterpunch. Other local Muslims, aware that this would be insulting to European Christians and fearing it would start a religious riot, explained what the church bells were and convinced him not to order the reading.

My point is that the sound of a church bell was a rarity in large swaths of the world. Today most of my friends around the world are still within earshot of a church bell of some kind. It might not be an actual church bell, but in this globalized world with the reach of mass media, it seems the good news of the church bell has covered most of the world. I know folks who are beaming the Christian message into Iran via satellite, some who are sneaking into North Korea, and others who are smuggling bibles into … well, nevermind. Suffice to say it is difficult not to hear a church bell in some form.

So in the midst of that, where do you have to live to be within a yard of hell?

Past blog posts (here and here) have pointed out that there is more than one way to live close to hell. The easiest way to do so in a developed country is to simply earn a middle class income. Wealth, even what we call middle class wealth, can draw us close to hell in ways unimaginable.

As Richard Foster wrote, “Wealth is not for the spiritual neophytes; they will be destroyed by it … The path is fraught with great frustrations and temptations, and those who walk it have to face perplexing decisions and tragic moral choices that most people will never have to consider … We (the wealthy) will be living close to hell for the sake of heaven.”

It’s a challenging statement. If you can read, write, own a television, drive a car, and know where your next meal is coming from … you are wealthy by the median standards of the world. Given that, and understanding Foster to say that such wealth challenges us on a spiritual basis, just how close is hell for those of us who live in a developed country?

It struck me that church bells actually do ring within a yard of hell.  But amid the soul deadening world of consumerism, materialism, and greed disguised as ambition .. can we hear them?