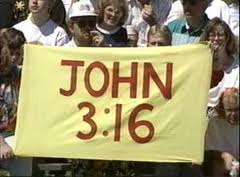 We’ve all seen “the sign” at sporting events.  For some reason, of all the Bible verses in Scripture, John 3:16 is the most commonly quoted.  Throughout the NFL world this past season we experienced “Tebow mania.”  Tim Tebow is the quarterback for the Denver Broncos and has publically been proclaiming his faith since college, when he wore the “John 3:16” patches under his eyes on game days.  Some even argued that God was behind the Bronco’s first playoff win this year because Tebow had his best game as a pro, passing for… you guessed it… 316 yards!  Can I get an Amen?  Tebow mania is just one reflection of a society that is familiar with this famous passage.

In short, John 3:16 states that if we believe in Jesus we will have eternal life!  Is belief enough?  What does it mean to believe?  James 2:19 informs us that even the demons believe.  We sell ourselves short if we restrict Christianity to simply having the right beliefs and yet our lifestyles are really no different from anyone else in the world.  I’m challenged by some of Jesus’ last words before he died, “I tell you the truth, anyone who believes in me will do the same works I have done, and even greater works, because I am going to be with the Father.  You can ask for anything in my name, and I will do it, so that the Son can bring glory to the Father.  Yes, ask me for anything in my name, and I will do it” (John 14:12-14).

In Philadelphia, violence is on the rise, particularly amongst the youth.  We are averaging about a murder a day so far this year and that doesn’t take into account the multitudes of others suffering from gunshot wounds that have escaped death’s door… this time.  We are in need of these greater works Jesus was talking about!  We need a real move of God, possibly even some miracles, in the face of the rising madness.  I want to look at a couple of the works of Jesus and encourage us all to ask ourselves if these same works are a part of our lives.

In Mark 9 we read about a demon possessed kid.  This kid seemed to be straight out of the Poltergeist movie… foaming of the mouth, violent convulsions, grinding of the teeth.  When the kid’s dad took him to Jesus’ disciples, things only seemed to get worse.  Then Jesus walked on the scene.  He rebuked the evil spirit, commanding it to leave the boy.  The evil spirit screamed, threw the kid to the ground and then left.  Jesus assured the crowd that he was not dead and helped the boy up, giving him back to his dad.  The disciples were perplexed and asked why they were not able to cast the demon out.  Jesus told them that this kind only comes out by prayer (some versions add fasting) (Mark 9:29).

I find it interesting that Jesus never prayed (or fasted) in this passage.  Rather than praying, he was “prayed up.”  Jesus weaved prayer into the fabric of his lifestyle.  It was in the secret places that he was empowered to do the work of the Kingdom of God among the broken and marginalized of society.  I think too often we treat prayer like our ATM machine.  We type in what we want, to get what we want.  Prayer is more than that.  Prayer is about creating intimacy with God and being empowered to live a life of love and holy rebellion in a world full of demons called violence, racism, materialism, greed, individualism, addiction, poverty, etc.  It seems that prayer has become one of the more difficult works of Jesus to practice in our society.  We are too busy, too distracted…if we are not on our favorite social media we are surfing the web or listening to music on our iPods.  In and of themselves these things may not be bad, but do they consume us?  Do they distract us?  In this world we cannot afford to simply pray, we must be “prayed up.”  I believe just as this was the foundational work to all of the other works of Jesus, so the same should be true for us.

I grew up in a tradition that did not talk a lot about miracles.  As far as I was concerned it was something of the past, something Jesus did.  To be honest I didn’t always understand Jesus’ miracles and why he did the things he did.  Take the blind guy who was healed for instance… Jesus spit on the ground, made mud with his saliva, and then put it on the man’s eyes.  He then told him to wash in the Pool to be healed (John 9).  Now put yourself in the blind man’s shoes.  You’ve been blind your whole life and now you hear about some holy man healing people… even healing the blind.  There he is right in front of you, you cannot see him but you certainly hear his every word.  Suddenly there is silence… then out of nowhere the Holy One seems to be conjuring up a Holy Hawker.  Then you hear him spit… you ask yourself what is that rubbing sound?  Then I can hear the blind man say, “Oh, no he didn’t!  Did he just rub spit in my eyes?”  Finally Jesus speaks, telling you to go wash yourself in the Pool.  I can imagine the blind man was already a step ahead of Jesus and was already trying to find someone to take him to the nearby Pool to wash!

Jesus was always doing things out of the ordinary.  But is it true we are to do the same works of Jesus… even greater?  Does this mean we can raise people from the dead after 5 days or simply spit on someone and they will be healed, no mud required?  I think one of the reasons we do not see more miracles in our society, is the direct result of not needing them.  Why pray for our daily bread when the fridge is full?

Jesus told us that if we ask him for anything in his name, he would do it!  This is important.  When talking about miracles it is easy to get wrapped up in the power of it all.  Doing things in Jesus’ name is all about doing things for his sake, as opposed to our own selfish motivation.  One time I went and saw a famous evangelist that was known for doing miracles.  I was skeptical as I walked into the sold-out arena.  It didn’t take long for folks to start coming up claiming they were healed.  He even blew towards the mass choir that was assembled and they all fell to their seats.  You could hear the ooos and ahhs, I simply wondered if he had forgotten to brush his teeth.  Finally a girl I had come with that had been bound to a wheelchair her whole life wanted to go and be prayed for.  She went up front and I waited with as much faith as I could muster to see what would happen.  In about 20 minutes she came back… still in her wheelchair.  She told me that when she went to ask for prayer they told her that she could only come up if she had already been healed?!  They wouldn’t even take the time to pray for her!

Honestly I would not have had a problem with the whole “healing circus” if they would have prayed for her and she would not have been healed.  We live in a broken world.  Think about it… every person Jesus raised from the dead, eventually died.  Those who were healed of a disease eventually died of another disease.  All those people he fed in the wilderness got hungry again in about 5-6 hours.  I think what is significant about the miracles of Jesus was not so much the power behind them as much as it was the love behind the miracles.  This is truly the greater work… the love behind the miracle!  There are more of us than the one person of Jesus Christ, therefore in his name we can do more acts of love and truly bring about a love revolution or revival depending on your tradition.

In this society we are in need of miracles.  As violence mounts, addictions increase and broken relationships are everywhere to be found, the works of Jesus are needed.  In our own society we have the blind, possessed and hungry and the power of love that healed them in Jesus’ day is as available in our day.  May we decrease so that Jesus will increase and may we be empowered to do the works of Jesus in our society.  Jesus is crazy about us, all of us… may we live into that reality.

—-
Chris Lahr is a Recruiter and the Academic Director for Mission Year. He is also a part of the Simple Way in Philadelphia. He is a writer and a speaker. For information about having Chris speak, contact him at: [email protected].