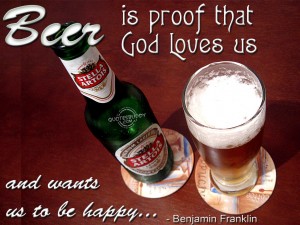 There’s a well-known saying, often attributed to Ben Franklin, about God and beer. I’ve even seen it on T-shirts and the like, but it turns out it’s mis-quoted. The one I see and hear is generally some derivation of, “beer is evidence that God loves us and wants us to be happy.” However, on further, tireless research, I discovered this blurb from a letter penned by Franklin in Paris around 1779:

We hear of the conversion of water into wine at the marriage in Cana as of a miracle. But this conversion is, through the goodness of God, made every day before our eyes. Behold the rain which descends from heaven upon our vineyards; there it enters the roots of the vines, to be changed into wine; a constant proof that God loves us, and loves to see us happy. The miracle in question was only performed to hasten the operation, under circumstances of present necessity, which required it.

Though I always found the mis-quoted version clever, as well as an intellectual justification for drinking, I actually like the real quote much better. Franklin, pointing to the story of Jesus turning water into wine, acknowledges the miracle of the processes of nature itself, taking natural sugars and recombining them into an (ahem) intoxicating elixir that has been a staple of global culture for millennia.

And then the religious folks came along and tried to ruin the fun for everyone. Having grown up Baptist, I heard some of my fellow faithful proclaim the evils of demon alcohol, though their warnings seemed to do little to stem folks’ drinking, aside from pushing them to do it more privately. Then I met some Anglican and Jewish friends who appreciated the fruit of the vine around the dinner table. I was shocked – and more than a little intrigued – when I saw kids under the age of twenty-one taking part in the ritual wine drinking as part of a Jewish Seder meal, and I was in awe when I realized some churches used real wine in their worship services.

So which is it? Is alcohol the lynchpin of the decline of civilization, or is it a sacrament, not only to be enjoyed, but to be held up as a gift from the Almighty?

There’s been a surge of interest in so-called “theology on tap” or “pub theology” events among faith leaders in recent years. I’ve even done a few myself. The idea is consistent with the missional church model, intent on blurring the lines between the sacred and secular, blending the two together in a way that, hopefully, brings a little bit more richness and relevance to both. It helps foster a more relaxed peer environment, while also implicitly telling passersby, “hey, we religious folk aren’t all morally superior stuffed shirts; we’re pretty much like you.” 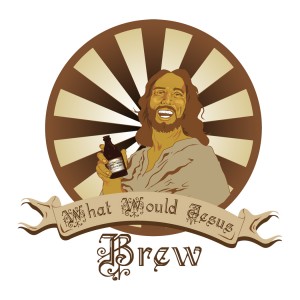 Is there a downside? Yes. In Colorado, we had a core family leave the church after a pub theology night, followed by wine served at our own “Goy” Seder meal during Passover. The husband was recently in recovery for alcoholism and he felt his sobriety was being threatened by the presence of alcohol in what he felt should have been a safe space for him at church.

I also remember an awkward moment at one of the pub nights when a guy from church whom I considered do be a practicing alcoholic threw back an uncomfortable number of pints while we discussed that nights Bible passage.

Both of these present reasonable arguments against having any kind of drinking associated with church. I get that. But there’s also something to be said both for reaching out into the “real world” with our faith (seems something Jesus did quite frequently), while also distinguishing ourselves from the sort of puritanical prohibitionism often associated with Christianity.

The message many pick up from what they know of the Christian faith is that it’s a practice of subtraction, not addition. We’re going to get you to part with your time, your money and all of the fun things you enjoy in life. Somewhere along the way, we got remarkably off point with our “branding, ” failing to show folks how a connection to a faith community and religious practices can actually enrich a life, whether it is void of meaning or already relatively rich.

Does alcohol make our faith better? That might be a tough one to argue, but in as much as it’s a powerful presence not only in our contemporary culture, but throughout the spectrum of recorded history, it’s a part of who we are as a people. But it seems to me that placing our focus on drinking in particular misses the larger sicknesses among us. Consider how we treat food, even in our churches. Consider the time, money and energy we invest into self-aggrandizing monuments to self that we claim are for the glory of God, or the special attention or deference we afford that family who writes the bigger checks on Sunday. Or our addiction to information, our obsession with ego, or our obsession with sex.

Actually, churches have a field day condemning that last one; they just generally lack any skills to talk about how to deal with sexuality in a healthier way. And the same could be said about our approach to alcohol. Easier simply to apply a plenary blessing or condemnation to the object of our attention than to deal with our complex relationship with it. Easier to “just say no” than do delve into whether our drinking (or spending, or sex, eating, etc) is a stumbling block that creates further distance between us, God and our loved ones.

There will always be detractors, no matter what. Jesus was called a drunkard for imbibing in public. The power that things like alcohol, money or sex have over some people scares the hell out of them, and I understand that. But to think that closing our eyes and holding the object of desire at arms-length will purge us of such “demons” is naive. Yes, Jesus drank; he also took his demons head-on. From what I see in scripture, he never used drinking to avoid his problems or fears.

So is it Biblical to drink? Did God give us the mysterious elixir as a gesture of love? Sounds like a good topic for a future pub theology night to me.