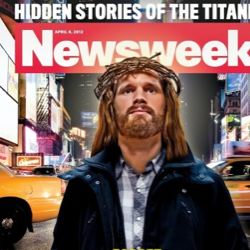 Two recent articles grabbed my attention, partly because they resonate quite a bit with the pieces I’ve written about Why Young Adults Leave Church. It’s also interesting to me that so many people seem to be talking about this at this particular time. Rachel Held Evans and I came out with some pieces at the same time, and then a similar story by Andrew Sullivan hit the cover of the April 9th issue of Newsweek. My wife, Amy, sent me an article by Adam J Copeland from The Christian Century called No Need for Church: Ministry With Young Adults In Flux.

In the article, Copeland recounts three snapshot portraits of three “typical” young adults who are seeking to follow the way of Christ without church:

A young woman told me that she too had grown up in a loving Lutheran church but felt pushed out when she revealed her sexuality. She now prays regularly, attends spirituality retreats at a Catholic ministry center and volunteers in a variety of settings. But she is not connected to a congregation.

A young man described how he had hoped to be a youth pastor in his conservative evangelical denomination, but then the rigid faith he was taught at Bible college sent him into a crisis of faith. Now his questions about the Bible, and about piety and certain theological doctrines, make him feel unwelcome in the church of his youth—and uninspired to try another church.

A young woman explained that she  planned to live in Fargo for only a year. She felt that it wasn’t worth expending the time she’d need to get connected to a congregation but wished she had a place where she could ask faith-related questions, a place where she might grow in her love of God and neighbor.

Why is this happening? There are a number of reasons, many of which I’ve already discussed in the articles I wrote and linked to above. And there’s no need for me to rehash everything Copeland and Sullivan wrote in their own pieces. but there are a few themes that emerge wherever I look for clues about this trend:.

The teachings of the church are seen as devalued. This doesn’t have so much to do with the inherent importance or validity of what is being said, but rather it’s a reflection of the value of information overall. It’s really a matter of supply and demand. Abraham Lincoln probably wouldn’t have walked so far to get a book from the only area library, after all, if he had Wikipedia and Google Books at his fingertips. Most anything being said, taught or preached about in a church on Sunday can be found somewhere else, wherever and whenever we want it. Why wait?

The institutions have outlasted their original purpose. Most of our churches were built when populations were static. People didn’t divorce, change jobs and move around like they do now. This mobility, combined with the diversification of networking opportunities, on-line and through other means,   puts bricks-and-mortar institutions in an awkward spot of hoping people find them where they are. And much of the outreach efforts of church is still an attempt to get people “in the doors.” But the fact is that most young adults don’t particularly care.

Our understanding of community has changed. This builds on the previous point, actually. Community used to imply a specific geographic focus, like a church, country club or lodge. All of these kinds of institutions, incidentally, are not what they used to be. Our understanding of relationship is different, and what we come to expect out of being connected to one another has evolved (or mutated, depending on your point of view) in both size and content. For example, I am still in contact with hundreds of folks from my past who are all around the world. A few years ago, we would never have heard from each other again. But I also don’t have many close friends. Everyone’s too “busy.” People are increasingly wary of investing their limited time and resources into anything new, including other people.

This all being said, there is still a significant interest in, and pursuit of, a life following the path lived out and described by Jesus. In some ways, we younger adults are starving for the very community we’re wary of much like the young woman from Fargo described above. But we’re distracted, skeptical and even a little paranoid, especially when it comes to institutions.

So what’s the answer? Those invested in ministry have to decide what matters most.

There’s a question I ask nearly every congregation I get asked to come speak to. Before we get into any other real substance about congregational transformation, I ask them: “If you could realize your vision for the community today, right now, but it meant closing the doors of your church forever, would you do it?”

If the answer is “no, ” then the mission has taken a back seat to something more nefarious. If the answer is “yes, ” and if they are truly committed to doing WHATEVER it takes with their personal and material resources to live out the gospel, then we have something to work with.

I’m not saying every church has to – and will – shut down forever in order to meet their new mission field’s needs. But if we’re not even willing to consider the possibility, it’s we who have a distorted value system; and those young adults wary of our motives are actually right in their skepticism about us.