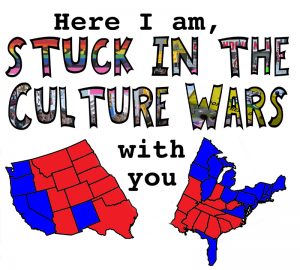 Growing up, I heard things at camp and in youth group about how “the world” thought and acted one way, and how “we” were not like that. In fact the world, it seemed, was intent on unraveling everything I valued as good and true, leaving me with a smoldering pile of ideals and beliefs, all dead oat the point of a secular sword. It was our job as Christians not only to defend against this frontal attack, but also to fight back in an effort to win souls for the Kingdom.

It was an epic battle, now in its beginning stages, but that would play out as depicted in the fantastical, horrifically violent pages within the Book of Revelation. The end is near; which side will you be on?

The Christianity of my youth was much like the Temple Mount in Jerusalem, a shining jewel high on a hill, beset on all sides by forces intent solely on its destruction. And our mission, as stewards of the faith, was to preserve and maintain the faith, protecting it at all costs. This, I would later learn, was the theological heart of what I now know as the Culture War. And some within the walls of the temple might argue I’ve abandoned the cause, or perhaps switched sides all together.

But all of this begs the question: does such a culture war even exist? I’m not so sure. Though there are those who would work actively to undermine the presence of organized religion anywhere it is found, it’s a relatively small but noisy group. I do believe, however, that there is a more subtle but dangerous dynamic that threatens the influence of Christianity in today’s world: the threat of pervasive indifference.

A growing number of people just don’t seem to believe that the Christian Church, in all its many forms, has much to offer them. They are not interested in becoming a part of another institution, and they certainly have no interest in engaging in some battle – much of which may be confabulated – against the rest of the world.

This is the point at which, much to the chagrin of the established church, heretics are Christianity’s greatest ally. They tend to be the ones on the fringes of the faith, who can see both the dynamics within the faith and those outside its scope. As such, they tend to be the ones who also can help forge new bridges of relationship, while giving permission to burn other “bridges to nowhere” to the ground.

It’s not as if the Catholic Church welcomed Martin Luther with open arms when he nailed his 95 Theses to the church door, challenging much about the way church and Christianity were conducted for centuries up until that point. After all, those on the inside had been given a charge, something to protect and preserve for future generations. But while some may have seen the likes of Luther as seeking the demise of the faith, he actually beckoned new life into it, forging cracks in the edifice that allowed God’s radical work to transform the old into something new.

This was, after all, at the core of Jesus’ mission too, and the prophets who preceded him. It was what drove Origen, Luther and Alexander Campbell to stand up in the face of the institutional authority and claim a greater authority – the inspired Word of God.

I use the phrase “Word of God” intentionally, but in a more heretical sense than to imply that God’s word(s) are contained simply within the pages of a book compiled by men some centuries ago in Nicea. I, like many others, believe that God still speaks, and I believe that voice, and the authority issuing it, does not wait to be mediated by any governing body. It is what pulls us out of bed in the morning; it’s what calls us out toward some impossible ideal of a better world; it’s the inspiration that is perennially restless, discontent with what is, after catching a fleeting glimpse of what might be.

Breaking God’s spirit loose from the confines of dogma, human fear, man-made institutions and conditional, mediated love is the necessary work of heretics. Does God’s spirit need such heresies to move in the world? Not necessarily, though the covenantal relationship established between Creator and creation seems to charge us with the responsibility of being God’s hands, feet, voice and heart in the world. And in as much as we use those resources to ossify and proscribe the faith to an existing system, we’re seeking to contain that spirit, to control it, and even to claim authority over it as if it is a prized possession we can choose to share or keep for ourselves if the rest of the world is undeserving.

Howls of heresy can often be confused with the birthing cries of something new coming into existence. And like a new birth, we can fight it with all we have, but the change will come anyway. In welcoming it, and in helping usher the mysterious “new thing” into being, we get to bear witness to its birth, while also hopefully not destroying ourselves in the process, trying to fight the inevitable change.

Heretics are engaged in midwifery. It’s a bloody, messy, often thankless task, keeping a steady eye on resurrection not of the Church, but rather the whole of creation.

—-
Christian Piatt is an author, editor, speaker, musician and spoken word artist. He co-founded Milagro Christian Church in Pueblo, Colorado with his wife, Rev. Amy Piatt, in 2004.He is the creator and editor of BANNED QUESTIONS ABOUT THE BIBLE and BANNED QUESTIONS ABOUT JESUS. Christian has a memoir on faith, family and parenting being published in early 2012 called PREGMANCY: A Dad, a Little Dude and a Due Date. Visit www.christianpiatt.com, or find him on Twitter or Facebook.