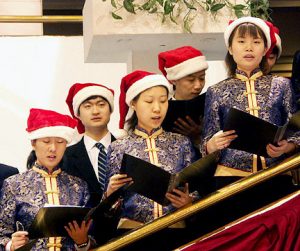 In mainland China, at least in 1999, they didn’t celebrate – or even acknowledge – Christmas. The lingering brutal winters fit that line from “The lion, the witch and the wardrobe” where Narnia is described as “always winter and never Christmas.”

I was teaching English for a major university in Beijing, China. It w as near the end of fall semester, and one of our sections was an overview of American holidays.  We had a drab government issue workbook with inane Mad-lib style fill-in holiday related sentences that was somewhere between infantile and oppressive.

As we began the lesson on Christmas, I mentioned a few familiar Christmas traditions – including gift-giving and Christmas caroling.  One of the students eagerly raised her hand with the obvious question “Can we do that?”

You need to keep in mind that in the People’s Republic of China, pretty much everything has been illegal at one time or another.  In fact, during the Cultural Revolution of the 1960s and ’70s, Chairman Mao had compiled a list of “Social Parasites.”  These were the categories of people who deserved no respect or legal rights.  Teachers were between prostitutes and beggars.

The wearing of glasses had been suspect – if not criminal – as it was under the Khmer Rouge in Cambodia – because that meant that one probably – gasp! – read books – clearly a sign of a intellectually roving, difficult to control individual.

And I had heard a vague rumor that there was to be no Christmas Caroling in hotel lobbies, but I had naively somehow imagined that to be some kind of hotel-related policy.

As a typical oblivious and optimistic American I said, “Sure, let’s do that.”

What teacher, especially far from home, would not want their students to experience, first hand, an essential American holiday tradition?

I invited two of my classes to meet at the lobby of the “Foreign experts” apartment building where I was living. This place, at best, was a nearly one star hotel – with the added feature of two or three women at the front desk (who spoke no English) who were our “watchers.”

These were older women who were always baffled, if not annoyed, by their foreign residents. I was probably the only resident from the USA in the building – and was certainly the one that, unintentionally of course, generated the most  discussion.  One of the “watchers” found my comings and goings amusing instead of bothersome.

Among other things, the watcher’s job was to “monitor” us and sign in every visitor.

Another “watcher” was the woman in her early 30s who was the faculty advisor, guide and helper for the “foreign” teachers working for the university. She had told me that she was a member of one of the illegal “underground churches” – I invited her to join us Christmas caroling – she, of course, was far to prudent to join us.

On the appointed evening I found about 50 students packed in my lobby. The “watchers” were scared and horrified. There is nothing like a crowd in China when it comes to attracting official – and unwelcome – attention.

The front desk “watcher, ” who was usually amused, was now in hysterics. Somehow she knew I had something to do with this.

I passed out about 20 candles and 30 copies of song sheets with the first verses of many familiar Christmas carols – Jingle Bells, Silent Night, O, Little Town of Bethlehem, O, Holy Night and a few more.

There were a few more people than song sheets, so the students clustered in groups of two or three as we sang the Christmas carols around the campus. It was a cold and clear evening and our voices softly echoed across the barren concrete campus.

These Christmas songs may be familiar to most of us, but these Chinese college students were seeing, hearing and singing them – all at once – for the very first time.

Even now, many years later, it brings chills to me to recall their faces glowing in fierce joy and discovery clustered around candles, with their passionate voices proclaiming the Christmas message under a frigid sky and to a sullen and silent campus.

“Silent Night” in particular stands out in my memory as a piercing hymn of hope in a world of frozen concrete monotony.

After singing for about 20 minutes, I was leading the group between two large buildings when a man rushed out and started yelling in Chinese.

I had to grab one of my students to find out what he was saying. He was with campus security and was irate that we had an unauthorized group (the authorities are overly sensitive about gatherings – perhaps for good reason) and that we had lit candles.

There was a fire hazard, presumably, on this all-concrete campus.

We stopped singing, and most of the group blew out their candles.

I suggested heading back to my apartment where we could have hot chocolate (which virtually none of the students had tasted before) and I had collected a large pile of wrapped cassette tapes and books for gifts.

As we turned toward my apartment, most of the candles were re-lit and many of the students were softly singing.

As we entered the lobby of my building, the “watchers” were yet again horrified – first of all because we were returning (among other problems, all guests were supposed to sign in, but this was impossible with such a large group) and, perhaps even worst of all, there was an important phone call – for me – from the head of campus security. He was furious – and spoke no English. I had to grab a student to take the call and interpret for me.

The head of security wanted to know my name, my department, my supervisor, and my apartment number.

I knew that I was in trouble – Chinese style.

I answered these questions as the rest of the students went up to my apartment where hot cocoa and gifts were waiting.

All the students were having a wonderful time when I finally made it back to my apartment. They each had a gift and their fill of hot chocolate. After about an hour they all left and a few students helped me clean up my apartment.

I was exhausted, but I knew that, for me at least, the party wasn’t over.

The next afternoon my phone rang. It was my official faculty “watcher.” She was laughing so hard she could barely speak.

She told me that I was in big trouble and needed to explain and document this “cultural experience” of Christmas caroling.

I was required to submit a copy of the song sheet we used and “proof” that our activity was merely a traditional American holiday tradition. I also had to give a reasonable estimate of the number of students involved.

Before she hung up she said, “You only have two weeks left on your contract, and I don’t think you’re going to make it.”

I compiled and submitted all that, and I am sure there is a bulky file somewhere in Beijing with my name on it.

The next evening, in the frigid darkness, I heard a faint echo of singing coming from one of the far corners of the campus. In a year living there, I had never heard any improvisational singing before.

I like to think I left a tradition of spontaneous joyful singing in the heart of their frigid winters.

About two weeks later my faculty “watcher” drove me to the airport. Long before this, she had called me her “little trouble-maker.” I could tell she wanted to make sure I got on my plane, but maybe, just maybe, she was a little sorry to see me go.

As I look back on this unlikely Christmas, I am reminded of the original Christmas, where Jesus left the safety and glory of the presence of God to bring a message of hope and restoration to a people who did not want to hear it.

And, in fact, were eager to murder Him to silence the voice of God in their midst.

I had travelled a few thousand miles, He had crossed eternity and stepped into our time and space.

He left His known world to leave us a legacy of peace and glory that transcends description and definition.

Isn’t that the most “Christian” thing to do? To risk it all to leave behind a living legacy of joy and shalom that redefines and shines hope on every seemingly grim circumstance?

As I look back on this experience, and realize how close I came to being arrested, deported or worse, I wonder…would I do it again?