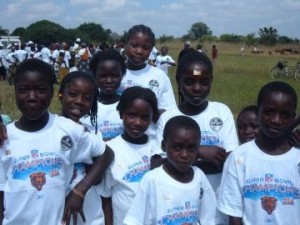 Henry Thoreau once said, “When people come and say, ‘I want to help you’, I flee.”  I think that what Thoreau was trying to tell us is that sometimes those who, with good intentions, try to help can do a great deal of damage.  No where is this more evident than in Haiti today.

Over the years, Christian folks, in an effort to help and assist the Haitian people, have brought in thousands upon thousands of articles of used clothing.  They have flooded Haiti, and the entire Third World for that matter, with secondhand clothing; clothing that often times is no longer desirable by its original owner and instead is sent to become a most prized possession by those in deep poverty throughout the world. The abundance of secondhand clothing donations has created a severe problem though.

In Haiti, and in other places in the Third World, there once was a significant amount of employment created by the production of garments for personal wear. Today, however, such businesses have been destroyed by Christian groups bringing in huge bundles of used clothing and giving them out for free. Residents of Haiti and other Third World Countries prefer to wait and receive the free clothing donations arriving regularly from the Western World rather than using their income to purchase clothing made by Haitians and in Haiti. When clothing is always free and available, why buy it?

Nowadays when I travel to Haiti I am often greeted by boys and girls on the streets with T-shirts that say “University of Michigan” or “Eastern University.”  Because of this long history of plentiful clothing donations almost all the clothing in Haiti is secondhand.  They have a word for it.  It’s called pepe.

Over the years, we have driven Haitian garment workers out of business.  Well-meaning Christians have created unemployment on a significant scale. One of the greatest issues that affects Haiti today, especially after the earthquake, is unemployment. When we in the Western World dump clothing into poor communities or builds homes for families (to provide another example) we are taking needed jobs away from Haitians.

What this means is that when it comes to ministry we must take the necessary time and effort to learn about the community and the country we are entering. What is this community or countries greatest need? How can we (whether as a group or individual) address this need in a way that does not involve a messianic complex but instead promotes the community and its citizens as a whole?

I am confident that if groups and individuals, prior to going on missions trips, prepare and educate themselves about the community and country they are dropping in on for one week that any work or relationship they participate in will be beneficial and advantageous for both the citizens and the visitors. Rather than engaging a mission trip to Haiti (or any other Third World Country) with the attitude of building and doing for people lets instead engage the trip as an opportunity to forge relationships and empower the citizens of Haiti to change Haiti.

If this sounds interesting to you I encourage you to get in contact with Haiti Partners. Haiti Partners mission is simple: Helping Haitians Change Haiti. Following the earthquake Haiti Partners sought to rebuild three schools that had crumbled. The process was completed entirely by Haitians: Haitian architect, Haitian general contractor, Haitian builders, Haitians laborers.