This week, Jarrod McKenna gave a statement/sermon in front of the Magistrates Court after appearing before the judge for nonviolent direct action with #ExtinctionRebellion. For Easter, we invite you to read and watch his words below. 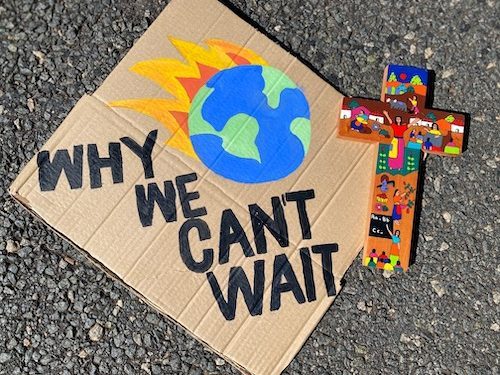 I have spent my adult life dedicated to welcoming asylum seekers and refugees. I was arrested as part of #ExtinctionRebellion because by 2050 over 1 billion people face becoming climate refugees if we don’t act now. That, and because I believe Jesus is risen from the grave.

If Christmas is the season to be jolly, maybe—if the Gospels are anything to go by—Easter is the season for Christians to go to jail. Nonviolently, in imitation of Christ, of course. Why?

According to the Ecological Threats Register of 2020 produced by the Institute for Economics and Peace:

1. One hundred and forty-one countries are exposed to at least one ecological threat, with 19 countries facing four or more threats.

2. 6.4 billion people live in countries which are exposed to medium to high ecological threats. 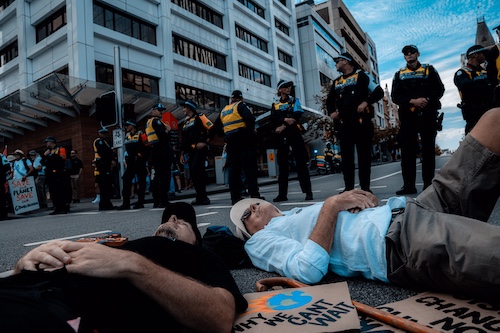 3. Of the 157 countries covered in the Ecological Threats Register, 34 percent will face catastrophic water stress and 22 percent catastrophic food insecurity by 2050. A catastrophic threat would result in substantial displacement of people or substantial increase in undernourishment.

5. Ten of the 19 countries with the highest exposure to ecological threats are among the 40 least peaceful nations on the Global Peace Index.

6. And I have already stated, an estimated 1.2 billion people are at risk of displacement by 2050.

That is unless we can dramatically pull our societies back from this suicidal reality. As Dr. Rev. Martin Luther King Jr. said the night before his assassination 53 years ago to the day, “Our choice is no longer between violence and nonviolence. Our choice is nonviolence or nonexistence.”