I sat near the back pew at Goldsboro District Assembly, after the ushers asked me to move up a few pews. Didn’t you know that pastors, especially Lutheran ones, abhor sitting close to the front in worship as much as anyone else?

I brought with me my notepad and laptop bag, still wearing the dress I donned that morning in Raleigh, a night after a book presentation to a group of around 50 North Carolina Lutherans and people of faith. Two days in a row wearing a dress (and Spanx, I have to admit) was a lot for this self-professed casual dresser, so much so that the second day I put a red t-shirt on over my dress just to feel more comfortable.

Comfort can feel elusive in this age of political chaos, of rush-rush-rush, of shrinking airline seats and ever more restrictive guidelines for buying a home and paying off debt and achieving, in whatever sense it remains, the American Dream.

Here was mine, in that room in rural eastern North Carolina, after having preached a 5-minute all-call sermon surrounded by preachers and leaders who’d inspired me and Christians all over America and the world for years. My first book trip to the South, via airplane. Surreal to believe I was here among them, sharing my research, hoping it made some sort of dent in a world hungry for hope.

They didn’t applaud at the end of my sermon like they’d applauded for the more famous, angrier men who shouted for impeachment and anger and retribution against evangelicals who’d sold their souls for political power.

I didn’t mind. I’d ended, after all, with a prayer — and applauding after a prayer maybe seemed a bit too close to the triumphalist American Christians who challenged the humble and powerfully quiet gospel of a risen Savior who died to show how strong God is. 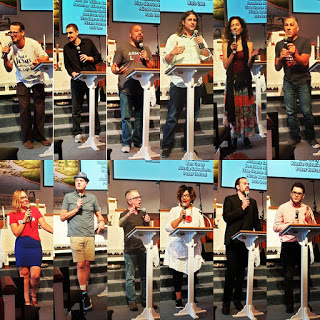 Preachers All-Call at the Red Letter Revival in Goldsboro, N.C.

I returned in the evening to the Goldsboro Revival in this little military town about an hour east of Raleigh, N.C. Despite my fatigue and road-weariness, I sat in the back pew to hear the words of a man I’d often considered a modern-day prophet, a man whose authenticity and commitment to Bible-centered justice never failed to inspire me, even in the moments when it scared me because of the commitment Jesus asks of those who are sent and called.

Goldsboro is the hometown of Rev. William Barber II, pastor of Greenleaf Christian Church just down the road from the assembly, where we’d held our “preach-a-thon,” earlier that day. I’d seen Barber speak to crowds of thousands on TV, and read his articles on the internet. Once he tweeted an excerpt from my book Red State Christians, and for hours my phone blew up with retweets and mentions.

Still, here, in that back wooden pew at the Goldsboro Assembly, I was struck by the humility of it all. The crowd was decent, spread across pews in the massive worship space. The praise and worship was inspired, reviving the flagging faith of weary Christians who’d traveled here from across North Carolina and, in some cases, America.

Despite Barber’s and others’ massive followings, however, it wasn’t a packed house. As he spoke, Barber kept mentioning the “Greenleaf” people in the crowd, and I was reminded that so many of us so-called Christian leaders can be so many things, but at heart we are all sometimes vulnerable parish pastors, caring most about those from our own community, those who know us best.

Near the end of his talk, leaning hungrily toward the crowd, Barber got close to the microphone.

He wanted to talk, he said, about Frederick Douglass, who is “doing great things lately.” (That’s a joke.)

No, Barber wanted to tell a story about the great African-American 19th century leader, a man who rose as a Black man in a time of slavery to be a renowned American intellectual and cultural leader.

Can you recognize the feeling?

Not even the kind of tired you get after staying up all night comforting a crying newborn baby.

No, Frederick Douglass was spiritually tired, a kind of fatigue that overwhelms your body, mind, soul, and spirit. He’d heard about the Dred Scott Supreme Court decision, a decision that declared himself, a Black man, as subhuman — as property.

Douglass realized that no matter what he’d accomplished, racism would always relegate him to a lower status in America. He’d never be a full American in the eyes of the government.

Douglass, Barber said, read the political news of the day and contemplated moving to England, where, he thought, he might be treated better and might finally be able to rest. Do you know that feeling? Have you thought of Canada wistfully?

Wracked by worry and frustration and sadness and this spiritual tiredness, Douglass, Barber said, was about to retire for the night when someone told him there was somebody at his door.

Sojourner Truth* was at the door. The indomitable abolitionist and slave-freer and Underground Railroad captain, a rescuer and warrior and savior in the mold of so many strong Black women who have held up America and the best of her ideals in the midst of circumstances that felled many strong white and Black men.

Douglass let her in, and Sojourner Truth could see immediately the weariness and spiritual tiredness, even deadness, apparent in her friend.

Barber shouted suddenly, wiping the sweat from his face in his auditorium in his hometown where he worried that the revival hadn’t been what they’d wanted it to be, where he shared his own angst over church members who had left, where friends had pleaded with him to “just not preach justice so much.”

If you could just not preach about ______ so much, everything would be better.

It’ll happen to you, Barber told us. “Because it happened to me.”

As he told the story of Douglass, Douglass’ tiredness became Barber’s tiredness, this man of tireless faith and inarguable commitment was revealed in all his own sensitive and vulnerable humanity, the nights spent up worrying about the gospel, the times he wished he’d never read the Red Letters of Jesus — their challenge insurmountable, their grace at times inaccessible in a world of quid pro quo.

Barber roared, and we were standing there with American heroes Frederick Douglass and Sojourner Truth, Truth holding up Douglass with her own tired arms.

She asked him one question, Barber said.

Because if God is dead, maybe we can stop.

An intoxicating but terrible proposition.

In worries about impeachment and fake news and lack of trust and government corruption and families torn apart by politics and Christian leaders who protect guns more than the poor, and hopelessness rising in the waters of the Arctic and flowing out the taps of Newark, spreading an invisible poison across the land where people tried to move away from each other, isolated, staying safe in our designated racial and cultural and political zones.

Barber, in his own tiredness and vulnerability — in his hometown that loved yet challenged him — summoned up the strength of a long-dead Frederick Douglass, a strength buoyed by his spiritual sister Sojourner Truth, who lifted him from depths.

In his roar, in a sanctuary with imperfect acoustics and a loud fan running to block out the 95-degree North Carolina October heat, I heard the shouts of the women at the tomb 2,000 years ago. They’d been up all night, and they were tired. Tiiiiirrrrreeeeddddddd. Bone tired.

Still, they came anyway to the tomb.

The angel met them. Held them up. So that they could hold each other and God up as they spread the message that would gird martyrs and redeem civilizations and force uncomfortable preachers and uncomfortably allied Christians out into the streets to speak for justice and abolition and Civil Rights and icebergs and migrants and poor people.

Mary whispered it to the other Mary, and together they went and told the rest. No, they couldn’t stop — even though often they wanted to — when lives were threatened and mortgages came due and jobs were taken away and invitations were rescinded.

They must press on.

These words, repeated and told again and again in story and later in song, reverberated all the way back to my wooden pew in the back of the church, where I sat stunned and tired.

Barber staggered off the stage. The gospel music lifted.

Moments later, I staggered to my rental car. I dragged my bags to the front desk at the local hotel, where Sojourner Truth called me by name and said she had an apple for me. Sustenance in the storm. It was enough. I would keep going, because they didn’t stop either. The tired ended when we were tired together, when witnesses to the holy surrounded me in my despair and fatigue.

I flew home the next afternoon, my head pounding with a migraine that hadn’t left since the night before. Still I said it to others, in words and in stories, so that in witnessing to it they’d say it back to me and I’d remember. God is alive.

No tired is stronger than that.

*This article has been updated to attribute Frederick Douglass’ interaction with Sojourner Truth, not Harriet Tubman, whom Rev. Barber quoted during the revival.