Here’s how you know Jesus has left your church building:

When only the powerful are allowed to speak and preach the word of God.

When forgiveness is offered without repentance.

When there is no cross, only a theology of glory of the powerful.

When the oppressed are silenced.

When the Bible is twisted to glorify white, wealthy male-dominated culture.

When piety becomes a show and true acts of discipleship are called sinful, embarrassing, or un-Christian.

When Jesus has left your church building, you ignore his words:

“Beware of practicing your piety before others in order to be seen by them; for then you have no reward from your Father in heaven … whenever you pray, do not be like the hypocrites; for they love to stand and pray in the synagogues and at the street corners, so that they may be seen by others. Truly I tell you, they have received their reward.” – Matthew 6:1,5

When your congregation applauds — and gives a 20-second standing ovation — to a pastor who admits to sexually abusing one of his youth group students. She was 17. He was 23. He drove her to a remote location, exposed himself, and forcibly initiated oral sex from her to him, in addition to fondling her.

The young woman’s name is Jules Woodson. She has chosen to share her identity only recently, emboldened by the #MeToo and #ChurchToo movements, exposing perpetrators of sexual abuse in secular society and in the church.

Terrorized and in shock, Woodson said the assault went on for several minutes. Savage then abruptly stopped, told Woodson she must not tell anyone what had happened, and drove her home.

She reported the incident to her associate pastor, Larry Cotton of the then-Woodlands Parkway Baptist Church in The Woodlands, Texas. At the end of her story, Cotton said: “So, you’re telling me you participated?”

Woodson said she felt her heart sink to the floor. She couldn’t say she’d wanted to scream no and run into the forest, because she hadn’t.

Her courage already began to waver. How could it not? She was 17. He was a trusted youth pastor. Another pastor was already treating the situation as an embarrassing tryst. Cotton told Woodson not to speak to Andy Savage anymore — as though she would want to. He told her that he’d be sharing all the information she’d told him with both senior pastor Steve Bradley as well as Savage himself, and that “the church would handle it.”

The cover-up had begun. Shortly after, Woodson shared details of what had happened to her with her discipleship group. Bradley and Cotton then decided they had to act, but they threw a going-away party for Savage, who merely said he’d “made a bad decision.”

Woodson said many people in church assumed she and Savage had shared an “innocent kiss.”

Years later, the church pastors and deacons — Woodlands Parkway Baptist had by then changed its name to StoneBridge Church, as part of a massive rebranding of Southern Baptist churches to non-denominational churches in the early 2000s — asked Woodson’s parents for permission to bring back Andy Savage as a pastor. He’d served other congregations and ministries in the interim.

Woodson’s parents said no, but Savage had no trouble finding other pastoral jobs at large, successful congregations. He disclosed what he called his “sexual incident” to Lead Pastor Chris Conlee of his current congregation, Highpoint in Memphis, and was still hired without question.

It’s only when Woodson came forward publicly several weeks ago (the story was first shared Jan. 5) that Savage was forced to come to terms with his past sexual sin.

How would his church handle this sexual sin, having already publicly condemned homosexuality as a sin before God?

Here’s how you know Jesus has left your church.

When your entire church service becomes a cover-up to retain the power and prestige of your congregation and its pastors, one of whom is a confessed sexual abuser.

When the entire church service dehumanizes a victim of sexual assault.

When your lead pastor apologizes to visitors and to Jesus at the beginning of his message — but neglects to call “the incident” what it plainly was, an example of sexual assault by a youth pastor to one of his youth group members.

Jesus has left your church when a woman is assaulted, but only men are allowed to speak publicly about it.

I watched the entire church service from Highpoint last Sunday. It’s available here, but be sure to keep a trash bag nearby if you feel the need to throw up at the hypocrisy and faux-piety exhibited.

I’ve attended several megachurches and attended church conferences for evangelical megachurch leaders (Catalyst in Orange County and Exponential in Orlando). I’ve been a part of planning contemporary worship as a pastor at large Lutheran churches, though not as large as Highpoint — several hundred rather than several thousand in worship.

What was most disgusting about this worship service was the way that Highpoint used beautiful music and powerful lyrics — excellent production quality and superb transitions — to enact a cover-up and deny justice to Jules Woodson.

One thing was evidently clear watching this video: Jesus had left the building.

Here’s how you know Jesus has left your church: when victims of sexual assault are said to be in need of “healing” rather than justice.

One of the primary ways that the modern church has dehumanized victims of sexual assault in the church — and primarily these victims are women — is by terming victims as “broken” and “in need of healing.” Over and over again in his message following Savage’s “confession,” Conlee uses the word “healing.” He says he is seeking “healing” for Ms. Woodson. He says “we want to be a source of “healing.” He says “the church exists to heal brokenness.”

But is that all the church does?

Did Jesus say he only came to heal the broken?

The Spirit of the Lord is upon me, because he has anointed me to bring good news to the poor. He has sent me to proclaim release to the captives and recovery of sight to the blind, to let the oppressed go free, to proclaim the year of Lord’s favor.

Does a sexual assault perpetrator need to be healed? Perhaps, but I would argue that the need for his healing is secondary to her need for justice. (I am using he and her here, because the data shows that the vast majority of sexual assaults are committed by men against women, especially in the church.)

Saying that Jules Woodson is in need of healing diminishes her. It says that she is a broken person, when in truth, the truly broken person is the perpetrator rather than the victim.

Jules Woodson is not broken. She is a survivor, she is brave, and Jesus lives in her.

Jesus did not seek healing for those who sinned, but rather he told them to repent and then follow him!

To those who argue that Andy Savage has repented, I would say: when? Listening to Savage talk, I heard him repeat several times that the assault happened “more than 20 years ago,” when in truth, it was almost exactly 20 years ago. Woodson says it was “less than 20 years” in her interview with local TV.

Savage is careful to say that “the incident” happened before he and his current wife were engaged, curious wording that suggests he was at least dating his current wife when he assaulted a 17-year-old youth group member while serving as youth pastor to her.

The entire church service seeks to diminish Woodson and lift up Savage. In fact, Conlee insists on calling Woodson “Ms. Woodson.” I couldn’t help but wonder if this was done purposefully to draw attention to the fact that she is not married, a black mark against her in conservative Christian culture.

The song choices lift up mercy: Love Never Fails, Reckless Love … the prayer is for “healing” and Conlee says the church is praying “in agreement” and “in unity,” seeking to quell any discontent and any disagreement about Savage’s misconduct. All must be united; lest the cover-up slips.

Savage says he realized later that “more could have been done for Jules,” which continues to focus in on the brokenness of the victim. Churches have done this for years to dehumanize and disempower women. They keep the focus on Woodson as broken, rather than Savage — if truly apologizing — admitting that he is the one who is broken and in need of healing.

The Bible is full of examples for what to do when you have wronged others and wronged God. The Psalms are full of confessions and lament. Old Testament figures such as Ezra the Scribe lead the Israelites in communal repentance: wearing sackcloth and bowing down before God.

And Jesus never hesitated to give voice to the oppressed, voice to victims — and to call a sin by its true name — as he consistently railed against the Pharisees, the megachurch Evangelical pastors of his time.

This is why…notice any female faces on Highpoint’s Leadership Team? 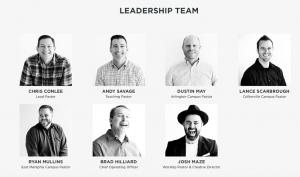 To all churches who do not allow women on their leadership teams or Boards of Elders.

To all churches who do not allow women to preach or teach men.

To all churches who do not allow women to serve in senior supervisory roles.

This is not the last of these stories.

To Jules Woodson, in this story, you — not Andy Savage — are carrying the Word of God. Thank you for your courage.

This article was adapted from Angela’s new blog.