I have a bad habit.

On lazy mornings after my alarm clock goes off, I get back into bed and check up on Facebook, Twitter and Instagram. I usually fall asleep again and don’t get out of bed until an hour later. I’ve tried to kick this habit in the behind many times but self-comfort often gets the best of me. Frustrating, I know.

Yesterday morning, the habit kicked me in the behind again. My alarm rang, I turned it off, climbed back into bed and surfed through Instagram. I saw TIME’s latest post of this haunting image, just minutes after it was released: 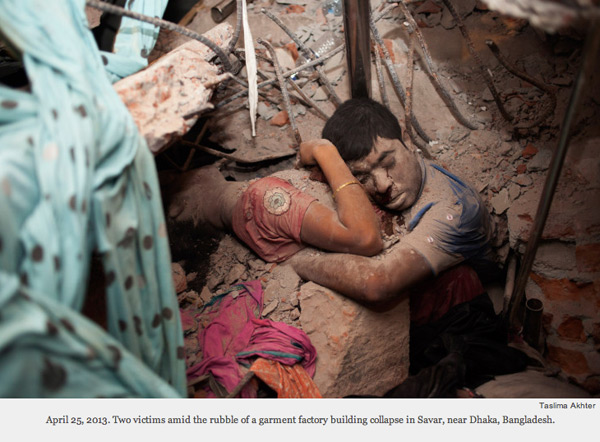 I was quickly scrolling through my feed and my groggy eyes couldn’t really tell what it was—it looked like an old ceramic statue discovered beneath the rubble, but was it? I quickly scrolled back up and skimmed the blurb to realize that this was a couple fatally caught in the aftermath of the garment factory collapse in Dhaka, Bangladesh. Indeed, they were humans—not ceramic statues.

I rolled over in bed to try to erase this disturbing image out of my mind. I spent all week in frustration—reading articles about the injustices that take place regularly in the garment industry, companies that are and are not doing due diligence to protect their employees overseas and stories from factory workers who are being exploited, abused, raped, threatened, coerced, imprisoned, killed.

We’ve heard these stories over and over again, I know.

I shut my eyes tightly—reminiscing on the people I know in this field of work: my Kenyan tailors who make all my khanga pencil skirts, the Chinese young woman who made my favorite tailored blazer, my friend, just a little younger than me, who sews for labels such as Gap at a wage too low even for living standards in India…

I drifted back to sleep…

Now, I have another bad habit:

I search for bargains—I’m Chinese. I appreciate a good sense of style, especially at a low cost, and I’ve been pretty good over the years by preferring second-hand stores over H&M. But every now and then, H&M’s blaring $5 and $10 red tags are too enticing to resist. The bargain wins again and again and…my morals are compromised.

I don’t mean to sound conceited, but it seems like I get a lot of compliments for my sense of style (thanks to my auntie who cuts my hair and to my mom who taught me how to always act, look and dress professionally). I believe that our sense of style helps us to confidently represent our inner image—our dignity. If complimented on a dress, I’d usually blush and say something like, “I got it for $10 at Zara!” True story. It’s arrogant, I know. It’s pathetic to realize that I take more pride in the fact that the dress was cheap on my end than if it were manufactured with dignity on the makers end.

“The clothing we wear reflects the choices we make: thousands of economic votes that have the power to shift the clothing industry, ”

Since our style is a huge component to our identity, I would prefer that my identity reflects my values, rather than my arrogant bad habits. If too quickly I fall asleep and forget about the millions of workers who aren’t being paid fair wages, if I allow ease and comfortability to dictate my decisions,  if I favor ignorance over compassion—my identity gets wrapped up in something other than what I am striving to represent. I should not let someone else’s poverty validate my own sense of “dignity” for the sake of being in-style.

I suppose this is why Forever 21 makes me hyperventilate while Salvation Army Thrift Stores make me smile thinking about friends who have benefited from working at the store during their recovery process in rehab.

When I finally got out of bed that morning, the haunting image popped up again in my news feed. This time, I read through the story from the perspective of the photographer.

This image, while deeply disturbing, is also hauntingly beautiful. An embrace in death, its tenderness rises above the rubble to touch us where we are most vulnerable. By making it personal, it refuses to let go. This is a photograph that will torment us in our dreams. Quietly it tells us. Never again.”

Working in the international development space as a photographer, filmmaker, advocate and friend, I can relate to Shahidul. Seeing this image is hard, I know. It’s vulnerable. It’s personal. And as I may try to roll over and fall back asleep, it refuses to let go.

Also by Nikole: Threads of Hope

Here’s a bad habit I want to break: falling asleep again and again in the midst of oppression, discrimination and injustice for the sake of personal comfort.

This image is changing me.

And as I am called to be an image-bearer of God, my image needs to be a reflection of His love for humanity.

Unless I do extensive research on the ethics of a brand, knowing first-hand where the clothes are made, I am committing to only buying second-hand clothing to reduce waste in a consumerist world that often tramples over the dignity of the poor. I know that this doesn’t necessarily solve the issue of unfair wages because some of the people working in these dingy factories are actually getting some sort of wage. I know that some companies like H&M and Forever 21 have a statement of corporate responsibility. I know that Gap has this program called P.A.C.E focused on “advancing women to advance the world.” I know that companies are trying to be more diligent in raising their factory’s standards overseas. I know that my actions against consumerism may not have a huge effect in the regulation of the fashion industry. I know that rebelling against the give-me-more mentality may not decrease the massive demand that pressures companies to pressure their employees. But I do know that I would rather have my values, my image and my identity reflect what I know for certain is giving life.

—
Nikole Lim is the founder and CEO of Freely in Hope. She speaks on stories of women’s empowerment in Africa, the role of filmmaking and photography in advocacy and the transformational art of storytelling. Nikole resides near San Francisco and works with inner–city youth.