The Christian world is still shaking from the tremors of the grand jury report released on August 14th regarding the abuse and cover-ups of over 1,000 children by more than 300 Catholic priests in Pennsylvania.

While the sheer numbers in and of themselves are astounding, it is even more heartbreaking when you zoom in and imagine the faces of the individual children whose lives were forever altered by the tragedy of abuse at the hands of spiritual leaders. I have friends who personally experienced sexual abuse by priests included in the 1,000 survivors mentioned. While some of these survivors are working their way through life finding some sense of healing, far too many have succumb to addiction or even death to numb the overwhelming pain.

I cannot help but think of Jesus’ words in Matthew 18:6, “But whoever causes one of these little ones who believe in me to fall away ​— ​it would be better for him if a heavy millstone were hung around his neck and he were drowned in the depths of the sea.”

Jesus spoke these words in a time in history where children were seen as property and pederasty was commonplace. I believe Jesus’ feelings in Matthew 18 speak strongly to those who abuse children today, especially those who engage in abuse while claiming to be representatives of God.

“‘I think we are worse,’ he said at the Religion Newswriters Association conference, saying too many evangelicals had “sacrificed the souls” of young victims.

‘Protestants can be very arrogant when pointing to Catholics,’ said Tchividjian, a grandson of evangelist Billy Graham and executive director of Godly Response to Abuse in the Christian Environment (GRACE), which has investigated sex abuse allegations.”

When looking at the modern church model, I see a common trend of devaluing children. From clergy using children’s ministry as a “lower” stepping stone to furthering their career toward the “superior” calling of adult ministry, to the many survivors I’ve spoken with who described how their voices were silenced as children when speaking up about clergy sexual abuse, to church resources being funneled into ministry branding instead of toward child protective trainings, I believe the church has missed the mark in valuing and protecting children. 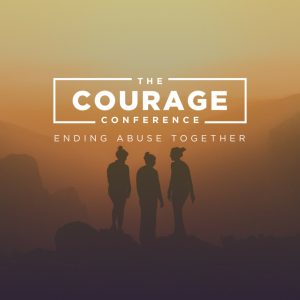 It was out of my own personal experiences of abuse, along with the voices of many survivors who have reached out to me regarding abuse experienced in the Church, that compelled me to address the issue head on. In 2016, I launched The Courage Conference.

The Courage Conference exists to be a refuge for survivors, to educate and empower advocates (including church leaders), and to create the conditions where a movement of change can develop that recognizes and resists abuse everywhere.

Now in its third year, this annual gathering of abuse survivors, advocates, and those who love them is an event uniquely poised for this moment in history where stories of abuse and cover-up are flooding the news.

We do this by offering a unique opportunity to learn from advocates and trained professionals through inspiring keynote talks and “Courage Conversations,” as well as connecting attendees with reputable local and national organizations. The Courage Conference is an ideal place for community leaders, pastors, and church workers to become educated about abuse from advocates who confront it and survivors who live with its effects every day.

It is our goal that everyone leaves empowered to live the most courageous life possible.

The Courage Conference seeks to take seriously the words of Jesus by taking seriously the pain and abuse of children and vulnerable adults and working to prevent future violations.

Church, no longer can we use the excuse of ignorance. The Pennsylvania report this week and the continual news stories of abuse and cover-ups in the church leave us without excuse. If you are a Jesus follower, I implore you to follow his example and speak up for the abused in our midst.