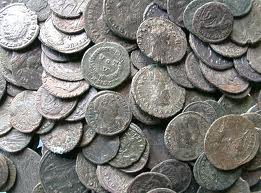 day is Pigeon Monday. Or at least that’s what I call it. Hopefully I’ll start a new trend. It would seem that Jesus had something against pigeons. That’s evident from the story of Him tearing up the Temple grounds.

On the Monday before Passover, Jesus entered the Temple grounds and unleashed some fury. It was always one of my favorite Bible stories when I was a kid. The vision of the Messiah overturning tables, driving people out, blocking people from bringing anything through the Temple … it was all so exciting compared to the meek and mild stuff I was told about Jesus in most Sunday School lessons. This was a God who would demand respect even in a junkyard!

The story of Jesus clearing the Temple continues to enchant me as I’ve grown older. I love a God who is willing to take risk and upset the status quo. Proclaiming truth as He exacts justice is an image that inspires.

Still, it seems odd that the Messiah who was greeted with shouts of praise as he enters on a Sunday would be turning over tables on a Monday. What would trigger such a shift? Why go from the adored Messiah on Sunday to the feared rebel rouser on Monday?

Over the years I have found nuances in the story that startle me, and the answer to this might come from those minor details. For instance, the story in Matthew and Mark both specifically mention Jesus going after the merchants who sold pigeons (or doves, depending on your translation).

Pigeons were used as a substitute sacrifice by those who could not afford to buy a lamb. The Mosaic laws specifically allowed this. It’s a rather nice way to allow the poorest of Israel a degree of self-respect and to feel included. They could participate in one of the most sacred rituals of their faith and know that they were completely within the bounds of the law.

So why would Jesus go after those who traded in pigeons?

Perhaps it was because the men who sold the pigeons on the Temple grounds were taking advantage of the poor. Perhaps they kept prices high, knowing that the poor had no choice but to pay. Perhaps this exploitation was particularly outrageous to Jesus. So outrageous, in fact, that His rage directed at the pigeon traders was the kind of passion the Gospel writers remembered years later. So outrageous that He was willing to exchange any goodwill that had been built up for the opportunity to make a statement on behalf of the poor and voiceless.

I like this Jesus. Bold, strong, willful … but acting on behalf of the weak, the poor, the oppressed.

On this Monday before Easter — this Pigeon Monday, as I call it — I aim to reflect on how my actions oppress the poor. And seek forgiveness for that.

Then I will reflect on how I might be able to turn over a few tables and chairs.

—-
Roy Goble is the owner of the family real estate investment firm Goble Properties. He is also the President of PathLight International, which serves at-risk youth by providing educational opportunities that integrate faith and learning. Roy is a Trustee of Westmont College, Chair of the Board for The SOLD Project, and is founder of several non-profit organizations. He and his wife D’Aun live in Pleasanton, California. You can read more about Roy at www.junkyardwisdom.com and follow him on twitter at @roygoble.