Annually, The King Center leads the observance of the national holiday commemorating the birth of Dr. Martin Luther King, Jr. The Beloved Community Awards is one of the marquee programs of this week-long holiday experience. The awards recognize national and international individuals and organizations that exemplify excellence in leadership; that pursue social justice and that are committed to creating the Beloved Community, in the tradition of Dr. Martin Luther King, Jr.

“It is a gift to be here tonight with my wife Katie Jo, and her parents, with my mom and dad – my friends, family, mentors and coworkers… the people I pray with, dream with, and go to jail with – tonight we’ve got the inlaws and the outlaws here in Atlanta.

So thank you – Dr. King, and Coretta Scott King, and Dr. Bernice King and all the fine folks of the King Center — for reminding us that we are not alone.  You remind us that we are in good company as we get into good trouble.

As I look at each of you tonight, the other folks receiving awards tonight, I can’t help but think – what a distinguished group of maladjusted people.  I am so honored to be among you.

It’s good to be maladjusted.

There is a Scripture that says: “Let us not conform to the patterns of this world, but let us be transformed by the renewing of our mind.”  It is an invitation to not conform, to be maladjusted.  So let’s not stop dreaming.  Let us keep living in ways that don’t compute.  Let’s keep disrupting the status quo, and getting in the way of violence.  Let’s keep interrupting injustice. Let’s keep troubling the waters. And stirring up holy mischief.  Let’s keep getting into good trouble – because we are in good company.  It is truly an honor to be here with you tonight.” 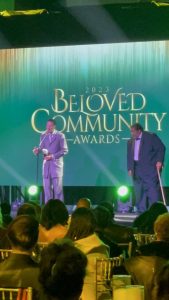 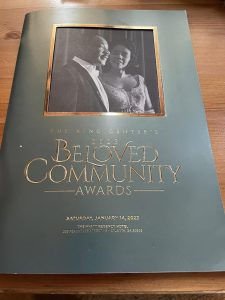 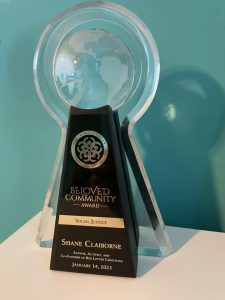 The full video of Shane’s award and acceptance speech will be added below when it becomes available.

Big thanks to Greg and Joey of The Wonder Brothers for producing such a great
introductory video. Learn a little more about Shane, his background, and Red Letter Christians.