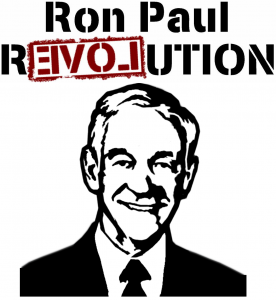 Republican presidential candidate Ron Paul recently argued for a “Golden Rule” in foreign policy in the first South Carolina GOP debate.  “We endlessly bomb [other] countries, ” he said, “and then we wonder why they get upset with us?”  Is this really such a crazy idea to boo?

Remember it was Jesus of Nazareth who said, “Whatever you want people to do to you, do that to them” (Luke 6:31 from N. T. Wright’s Kingdom New Testament, 2011).  It would be almost comical, if the effects weren’t so real and devastating, to watch the parade of evangelical Christians who ridicule this foreign policy of Jesus yet work so hard to put Dominionists and “chickenhawks” in the White House.

Like many Christians, I’ve been struggling to decide who to support and ultimately vote for in the coming presidential election.  Once you shed old partisan allegiances and allow your Christian faith to steer you, you quickly realize that the questions snowball out of control.  “Who should I vote for?” promptly becomes, “How do I determine who to vote for?” which could ultimately become, “Who would Jesus vote for if He could vote?”

These kinds of questions can further turn into, “What does the Bible say about voting and democracy?” and “Should Christians even vote at all?”

I was reading various online sources about these questions and encountered a Catholic web post from 2002 discussing who Catholics should support electorally.  Answering a letter writer, “Dear Grace” MacKinnon responds that Catholics have the moral obligation to vote for a pro-life (i.e., anti-abortion) candidate when faced with a pro-choice alternative.  Not doing so would be a “mortal sin.”  MacKinnon quotes Catholic Bishops stating, “It is our responsibility to vote for candidates who will promote life and the culture of life over the culture of death.”  Abortion and euthanasia are discussed but not war or the death penalty, at least in MacKinnon’s summary of the Bishops’ position.

The reason I mention this Catholic teaching on an evangelical website, aside from the fact that we have much to learn from other traditions, is that something stuck with me after reading the quotes from the Bishops.  They further state that, when it comes to voting, they “wish to underscore the absolute centrality of the protection of human life.”  I think many evangelicals, particularly conservatives, will shout their unwavering support for this statement.  But then how can you and I—well-meaning Christian voters—electorally support militarists of both parties and still sleep at night?

My questions from earlier became, “Are we responsible to God for the actions of the politicians we vote for?”  I’m not talking about “open marriage” requests—you-know-who is responsible to God for that one.  But if we’re taking this democracy thing seriously, understanding popular sovereignty and the nature of a republic, then yes—we are responsible in a sense for the innocents killed in our name during military strikes.

Should we not hold our government accountable with the same standards we hold ourselves to?  If we want to claim corporations are individuals, then maybe we should treat the government like one too.  Maybe the Golden Rule should apply to government.  The Apostle Paul says in Romans 13 that governments wield the sword.  In a democracy, you and I have our hands on the hilt.  I would rather “boo” the use of that sword than “boo” the notion that it should only be swung consistent with Christ’s teachings.  Remember Jesus also said, “People who use the sword die by the sword” (Matthew 26:52, KNT).

I like how Doug Bandow puts it: according to one family of conservative Christian voters profiled by the Washington Post, “Ron Paul [is] unacceptable because he [does] not favor promiscuous war-making, even though Jesus is the Prince of Peace.”  Well-meaning Christian Republicans are saying things like, “I like some of Ron Paul’s ideas but his problem is foreign policy.  That is why people aren’t supporting him.”  But just maybe other people are voting for him because of his foreign policy.

The rest of the Golden Rule passage from earlier reads: “[L]ove your enemies!  Do good to people who hate you!  Bless people who curse you! Pray for people who treat you badly!  If someone takes away your coat—don’t stop him taking your shirt!  Give to everyone who asks you, and don’t ask for things back when people have taken them” (Luke 6:27-30, KNT).

(OK, maybe the Ron Paul rEVOLution falls short on that last one.)

Progressive Christians who read this site may be thinking that Ron Paul’s Tea Party-like selfishness when it comes to taxation and redistribution shows us that the “LOVE” really isn’t part of the r****ution.  I’m not dismissing these concerns—quality of life matters too.  But maybe issues of life itself do take center stage over social welfare, like the Bishops argue.  MacKinnon writes, “It is true that sometimes it seems as though no particular party or candidate fully reflects our moral values, which makes it a challenging task for [Catholic Christians] to vote.”  Amen—insert any brand of [Christian] in there.  But she asks, should that stop us from exercising our rights (and responsibilities) of citizenship?  She says no because of abortion; I say no because of life, more broadly defined.

Loyal Republicans are also making the argument that Ron Paul’s attempt to spoil the Republican convention, using it as a platform for his “crazy” ideas, will only split the base and lead to an Obama victory (aside from the fact that the base is already split three ways following the South Carolina primary).  I recently picked up a copy of Jonathan Chait’s 2007 book The Big Con at a dollar store.  It does a good job detailing how modern conservatives left behind fiscal responsibility and ethical governance in their effort to fleece the public and win elections.  In the book Chait quotes Irving Kristol and former Newt Gingrich spokesman Tony Blankley admitting that embracing supply-side economics (i.e., perpetual tax cutting for the wealthy) and getting into bed with lobbyists, respectively (not respectably), both help “conservative” Republicans win elections.  And that, my friend, is the number one priority.  Even evangelical leaders who recently met in Texas to decide who to support for the Republican nomination were reportedly concerned about “electability” in choosing one evangelical darling over another.

But should evangelical Christians, regardless of party, be so concerned about winning elections?  I know it is just human nature to want to win (see my four-year-old son), but we get way too rabid when it comes to winning arguments on ideology and social policy.  Maybe we should stand on principle instead—on the principle of life.  Maybe evangelicals need to NOT win sometimes in order to understand what it’s like to be Christ-like.  Maybe we need to back away from our cozy relationship with today’s Rome.

Jesus certainly didn’t win when he threw his hat in the public arena—they replaced it with a crown of thorns.  Instead of boos, he was almost stoned (John 8:59, for one example).  Maybe we need a martyr like Paul (Ron, not the Apostle)—someone who goes down in flames with their principles intact—to remind us that politics as usual is not “Christian.”  I’m not saying Paul is the messiah or necessarily that you should vote for him (I have not publically endorsed Paul or any other candidate).  But perhaps Paul’s overturning of the Republican temple’s tables is just the kind of thing that’s needed in this country.

There are certainly reasons to not vote for Ron Paul in this election—check almost any other news or opinion site for these.  But not voting for him because he can’t win or because he advocates the Golden Rule shouldn’t be among them.  With apologies to Roger Gottlieb, maybe Paul is the only candidate taking a real “Christian” position on foreign policy.  Whoever you vote for this year, just make sure you can do so consistent with your conscience and principles and still sleep at night while defending your decision before God.

And who would Jesus vote for?  I don’t know.  Did he ever express a preference for one caesar over another?  He probably wouldn’t vote at all, but I doubt he would compromise by supporting a “winner” who represents the proverbial lesser of two evils.  Today, he might even say that there’s not a denarius worth of difference between the two parties—especially on foreign policy.

—–
Joshua D. Ambrosius, Ph.D., is an urbanist, religionist political scientist who is completing a book manuscript titled A Politics of Selflessness, a rethinking of Christian political theory and action.  Holding graduate degrees in public policy from the Johns Hopkins University and the University of Louisville, he is currently an assistant professor at West Virginia State University near Charleston, WV.  His latest research on religion and politics appears in the Interdisciplinary Journal of Research on Religion, downloadable for free at http://religjournal.com/articles/article_view.php?id=56.