Hello, My name is Thet.

Since Feb. 1, my entire life was upended when the military staged a coup in Myanmar. I have been using my IG to share what’s happening in Myanmar with the hope to document both the atrocities and resistance of the coup.

Myanmar People have been protesting the Military Regime for over 100 days. On February 1st, 2021, the Myanmar military staged a coup and overthrew the civilian government. Since that day, over 860 people have been killed by the military (including more than 70 children), over 4800 have been arrested, and an estimated 300,000 people have been internally displaced by military violence.

I’m here to share with you all a few ways that I and my people have been resisting the military coup. 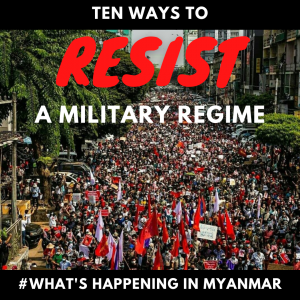 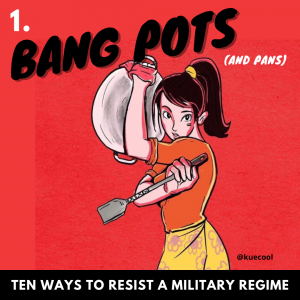 Starting the day after the coup, all across Myanmar, people young and old gathered their cooking implements and banged them at 8 pm daily, as an act of resistance against the regime. 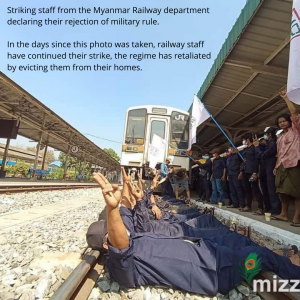 Public sector healthcare workers started Myanmar’s Civil Disobedience Movement (CDM). On February 2, they demanded a return to civilian government and refused to work for the military. Since then, over 60% of the civil sector has joined the movement and refused to work under the regime. Many of these families are facing increasing financial hardships for their choice to resist. 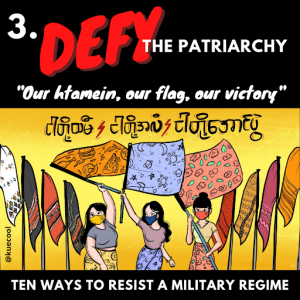 Protesters used the military regime’s misogyny to their own advantage, by forming barricades out of women’s clothing. The Myanmar Military is especially violent to women and LGBTQ+ individuals, and this revolution is a rejection of their violence. 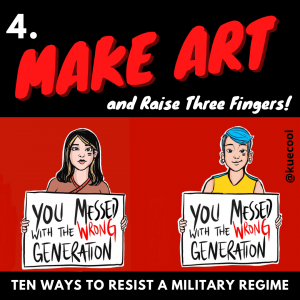 The months since the military coup in Myanmar have revealed a surge of artistic talent in Myanmar, as protesters turn to art as a means of resisting the lies of the regime, and as a means of honoring those who have lost their lives protesting. Myanmar protesters adopted the three finger salute in much of their art, the three finger salute is a symbol of defiance and protest against authoritarianism. 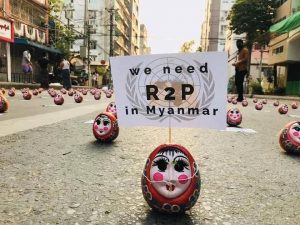 By late February, police and soldiers were shooting protesters in order to kill them. The death toll rose sharply. Protesters responded by creating person-less protests and digital campaigns. 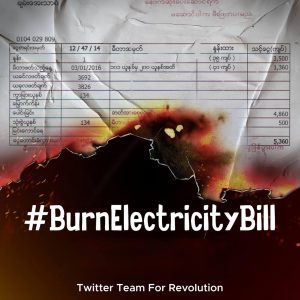 Myanmar people have found various ways to resist and break the military’s system of governance, either by boycotting Military owned companies, or by choosing not to pay electricity bills.

“We won’t support the dictator . . . the income from electricity charges is huge and they won’t be able to survive without that money.” -Hotel owner in Bagan, Myanmar 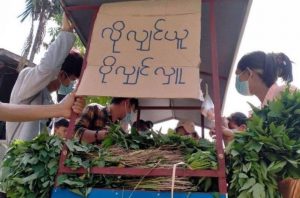 “Take if You Need, Donate if You have Extra,” reads the sign above. Between the coup and the pandemic, Myanmar’s poverty rates have shot past 60%. To keep each other from starving, Myanmar folks continue to set up free food stalls for each other, and found multiple ways of offering mutual aid to one another. 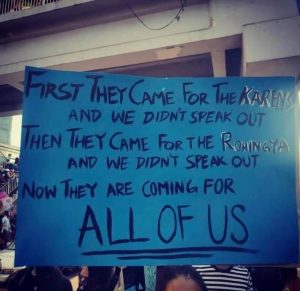 This revolution has brought so many of the issues that plagued Myanmar to the surface. The plight of Myanmar’s persecuted ethnic people has especially entered mainstream understanding throughout the country. People now acknowledge how the military has persecuted and exploited ethnic people for decades. And now people throughout the country are committed to doing what they can to help us stop it. 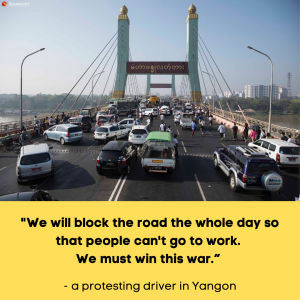 Staging protests as Power Rangers, dropping things in major intersections and picking them up slowly to stop traffic, writing messages on money, and even staging nationwide protests feigning to have broken down cars: creative resistance can take many forms, and Myanmar’s protests are a testament to this truth. 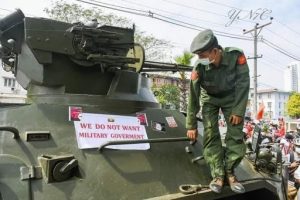 Amid the uncertainty that accompanied the early protests in the streets (Would the military shoot to kill? How would they respond?), some bold protesters found ways to make everyone laugh. As the revolution continues into its fifth month and the death toll rises, it’s become harder and harder to laugh. Despite this, Myanmar people are still finding ways to laugh in defiance of the regime and its tactics. 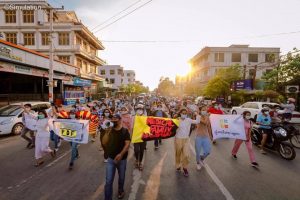 Myanmar is our home. This is our motherland. And the people from our motherland are compassionate, wise, and brave. We have taken care of each other, looked out for one another, and fought bravely before. And we will fight bravely again.

This is our inheritance and our legacy. No matter what, our motherland will never lack in courage. Thank you for bearing witness to our resistance.

There is daylight at the end of this road for us. Even now, can you see it peek through?

If you want to support Myanmar people, please follow and/or support these groups doing good work on the ground:

On the Ground Mutual Aid

Donate via Paypal here or here