“There is no fear in love, but perfect love casts out fear. For fear has to do with punishment, and he who fears is not perfected in love.”  – 1 John 4:18

On Monday July 22nd, nine young undocumented immigrants walked up to the port-of-entry at the U.S.-Mexico border and asked U.S. customs and border agents to let them in to return to their homes in the United States.  They are now asking President Obama to immediately grant discretion and release from the Eloy detention center in Arizona. 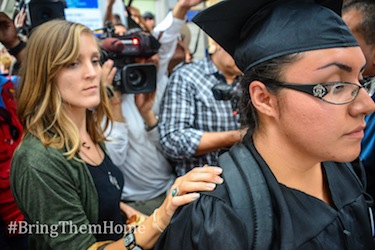 It was an action that will go down in the social justice history of America, like the crossing of the bridge into Selma for the civil rights movement. The courage and faith demonstrated by the DREAM 9, risking everything in order to stand up for the most vulnerable of immigrant families, represented the sacrifice and hope of bringing the kingdom of God to the here and now.

Southern Arizona faith leaders and clergy were asked to accompany the young adults, representing denominations including Presbyterian, United Methodist, Episcopal, Catholic and Evangelical churches. As the young men and women were preparing to slip on their caps and gowns, symbolizing their U.S.-based education and homes and the DREAMer movement, the faith leaders took a moment to say a blessing over the action. The faith leaders then accompanied the young people to the port-of-entry. It was at this gate that each DREAMer presented an application for humanitarian parole, knowing they would most likely be taken into custody immediately and detained.

The beauty and bravery of this action was even more powerful because of the juxtaposition against the backdrop of a border that has caused thousands of deaths and needless suffering of immigrants in the past two decades. This setting exposed the hypocrisy of calling for a “welcome of the stranger” amidst the deadly and harsh border enforcement that separates so many families.

Related: Read the story of Isabel Castillo, a vibrant, educated young woman prohibited from working in the USA 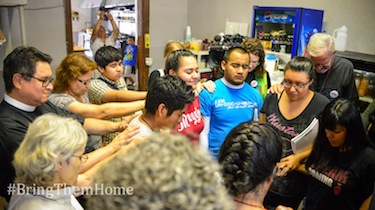 Each of these young people deserves to be able to come home. One was the Valedictorian at her high school graduation, another a track star, another starts law school in just two weeks, another volunteered for the City of Wichita translating public records forms, several received academic scholarships, most volunteered in schools and churches, one was a model United Nations Ambassador, all worked in community service programs and distinguished themselves as future leaders in their communities. Marco Saavedra, one of the DREAM 9, is eligible for DACA, but has risked his own future in order to advocate for the return of the 1.7 million separated from their families through deportations under President Obama’s administration.

As faith leaders and southern Arizona community members, we stood with undocumented poet and chaplain, Marco Saavedra, in a line just a few feet from the gate where he would cross back to his home in the United States. In the final moments before his detention, a reporter asked him, “Any last words? Are you afraid?”  Marco replied without hesitation and with a sense of peace in his expression, “There is no fear in perfect love.”  These DREAMers are the prophetic voice for this moment in history of the heated immigration debate, and the hope is surely in this undocumented youth-led struggle for freedom and dignity. They call it, “Dreams beyond borders.”

What do we hear them saying to us? Dreams beyond borders. 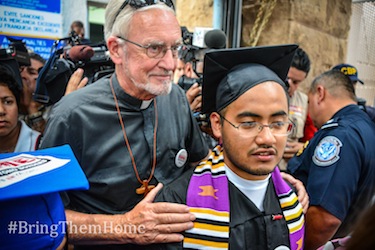 They have laid their very lives on the line to say we must stop deportations that separate our families. We must stop using a dehumanizing detention system to manage immigration. We must reconsider what genuine and compassionate border security looks like that does not produce death, human rights abuses, and family separation. In fact, they may be saying to immigrant rights advocates that they do not aspire to be citizens, but rather aspire to be treated as human beings made in the image of God. They may also be saying that the way forward for immigrant justice for families and the most vulnerable will not be an easy path, but one that requires suffering, to take up one’s cross to follow Jesus. Will you follow?

The DREAM 9 are currently being held in immigration detention in Eloy, Arizona. Please pray for their release and for the reunification of families separated by deportation and border militarization.

—-
Maryada Vallet works as a humanitarian and evangelical agitator on the border. For more on border humanitarian work, go to NoMoreDeaths.org

Steve Pavey, Ph.D. works as an anthropologist, artist and activist at the One Horizon Institute.  He works closely with the undocumented youth-led struggle for freedom and recently co-authored Shadows then Light with Marco Saavedra.