“Without a vision the people perish” so goes the oft quoted biblical proverb. In our church experience it has been used by leaders to suggest that ‘the’ vision of the church leader(s), and therefore the church, is worth fighting for; it is possibly even more important than the hopes, dreams, and lives of the individual church members.

Paul Scanlon, who for many years headed up the Abundant Life Church in Bradford, England, wrote in his book Crossing Over about his vision of moving from their existing building to a larger complex built on their campus site. He spoke in a sermon about those who left the church during this period and used the phrase ‘we lost them in the car park’.

Paul isn’t alone in finding it preferable to overlook the stories of those who seem resist to change. There are countless times that my wife and I have been at leaders meetings and felt the surge of power invested in the delegates to return to their pulpits and join Isaiah in setting their faces ‘like flint’ in ignoring the dissenting voices in our congregations in order to fulfill our destiny: the metaphors and narratives might change but the meanings don’t.

Over time we became increasingly weary of such teaching as we realised that it didn’t really resonate with the picture we see in Jesus who would not only ‘lay down his life’ for his sheep but would willingly leave the ninety-nine in order to find the individual who had become lost.

On considering both our own experiences and the stories told to us by others we have begun to see several patterns emerge in many of the scenarios where the vision has been held up as the highest reference point for success.

Firstly, church engagement is not a single entity; it is certainly not an upward journey of increased adherence. This is, of course, true of all human organisations, I use the same model when I train business leaders, but it has particular resonance for our church context. I would like to suggest that there exists an organisational entropy when it comes to a person’s engagement to a group, community, or vision.  Most of the models that I have seen explaining how to secure human engagement tend to paint a picture of an onward and upward journey toward increased adherence. I am not sure that this is either possible, or even perhaps desirable.

I would want to suggest a three-phase journey experienced within a community:

Each of these phases have particular narratives, drivers, and feelings associated with them.

In this phase the church members tend to believe in the vision expressed by the leaders. They are immune to, or choose to ignore, many of the ways that leaders act that cause disengagement in those in the other phases.

When leaders speak in hyperbole they choose to nod in agreement and repeat the messages to new people. When they are asked ‘what’s not to like about this?’ they cannot think of anything but a positive response.

In churches that have a tendency to be highly driven by vision there is often little room for doubt to be expressed. Sermons often contain conversation halting statements like ‘you cannot out give God’. In this context any questions raised about the church tithing policy are painted as representing a lack of faith.

There are several possible reasons why those in phase 1 find it easy to ignore what seems obvious to others. Sometimes it is because of the promise of perceived benefits to be found within churches that adopt an aspirational model. It likely will be suggested that adherence to the vision will result in the possibility of the individual’s personal vision or goal being fulfilled; leading a team, speaking from a platform, playing in the worship band or the like. The model often fails because it tends to adopt the same numbers game model used by TV talent shows. That is; promise enough people personal fulfillment and a few will have the talent or gifts to make the dream a reality. These then become the trophies of success that encourage others to believe in the process.

In addition to this are other motivational factors such as the need to belong or the desire to be part of something successful. It is hard to resist the comparison with pyramid selling schemes at this point.

Whilst the individual’s journey is progressing towards the aspirational goal it will be relatively easy to ignore what those in other phases find difficulty with.

This enthusiasm and adherence is fuelled because leaders will encourage those who appear to be in phase 1 by including in them in conversations, valuing their input, and involving them in what appears to be an inner circle; at least at a surface level.

I would suggest that it is almost impossible to remain in phase 1 for an extended period of time. In fact most leaders do not reside in the Enthusiastic phase even if they appear to do so. Pete Rollins speaks of this when he highlights the presence of twin, competing narratives within organisations. The headline narrative of a church, he says, might be ‘God heals’ but the unspoken or hidden narrative that most people, including the leaders, really live by is ‘God heals: but if you are really sick go to the hospital’.

In the realistic stage there is a greater influence upon the individual from this unspoken narrative. The dissonance between the message from the platform and what people see in practice becomes harder to ignore. The outward behaviour of people in this phase may at times still look like that of the inhabitants of phase 1 but internally questions are being raised and the process of disengagement has begun.

Even so people in this stage will still likely stay in the church. This is driven by a variety of factors.

It might be that the fear of being rejected might hold them to the group. This in turn is fuelled by the leadership’s well-defined descriptions of what is ‘in’ and what is ‘out’. Added to this are the oft-pejorative descriptions of what the ‘other’ looks like. The implication is that other churches are not where the real blessing is to be found.

Sometimes people stay because of the possible effects upon other family members or because they may well be on church staff and so are tied financially to the vision.

Leaders, if they perceive this is happening, will tend to treat this group differently that those in the previous phase. Rather than people feeling included they will have a sense of being used to fulfill the vision. Their value is therefore linked with their usefulness to the ultimate goal.

Any hints of dissension will be tolerated because it is likely to be hinted at rather than overtly stated. Behaviour that does not fit with the standard set as the norm will be challenged from the platform.  We were in a large church some while ago and the senior leader announced from the platform that 161 people had arrived at least 2 minutes late for church that morning. The congregation was then ‘encouraged’ to give their full commitment to God; in essence conflating church attendance with obedience to God.

With an increasing sense of awareness of the narrative dissonance described above it is almost certain that people will find the need to disconnect emotionally from the central vision of the church.

People will have a greater awareness of feeling like a commodity in the process of moving towards the vision. Seeing others being ‘lost in the car park’ tends to make those who remain feel used too. How you treat those who leave has a direct effect upon those who stay.

Leaders will often ignore or even demonise those who are in phase 3 in an attempt to create a narrative that undermines any complaints that they might raise. Once someone is painted in a bad light it is easier to ignore their voice.

Eventually, if employed, they will be dismissed. If a lay member they will be discouraged from having a voice thus making it almost impossible for them to stay. In a sense this is like the ecclesiological version of constructive dismissal.

The only two choices they are left with is to either remain silent but internally disconnected or to leave the church altogether.

In the above I am not suggesting that the motives of the leaders are always in question. My wife and I have been both hurt by the construct and been part of the group doing the building. I think the wider culture of theological training, denominational fervour, and leadership teaching encourages the behaviour described.

Whether fair motives or foul, however, the result is that individuals and families are sometimes sacrificed on the alter of achieving the vision: even if we just call it losing them in the car park. 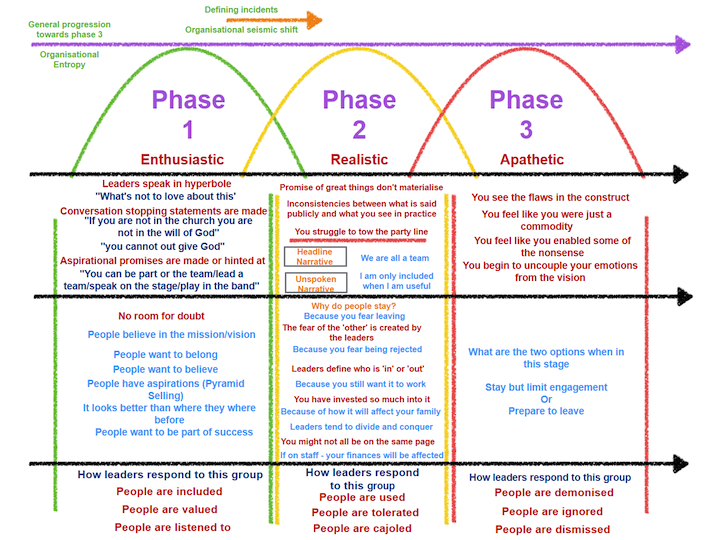