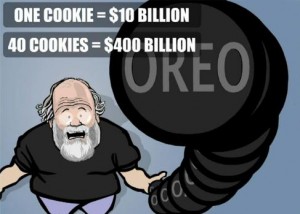 Growing up in the Bible belt in East Tennessee, I can remember an entire campaign built around – “What Would Jesus Do?”  There were WWJD bracelets, stickers, and t-shirts.

Today there is a new campaign.  As legislators in D.C. debate cuts in the federal budget, Christian leaders around the country are posing the question “What Would Jesus Cut?” We simply want to make sure the poorest and most vulnerable are cared for… as Jesus said, “when you do it unto the least of these you do it unto me.”

I’m not one to place a ton of hope on Capitol Hill, but it does seem all of us could do a little damage control.  After all, cutting $3 mosquito nets that can save lives while continuing to spend $200, 000 a minute on the military should raise some flags of a different sort.

What would Jesus cut?

In fact, US military spending is now 56 percent of the world’s total military expenditures and that is more than the military budgets of the next 20 countries in the world combined.

Even though the 533 billion dollar budget is the elephant in the room and the gushing, bleeding wound of America’s deficit…  it has been the sacred cow.  But folks are beginning to whisper.  I’m not sure about sacred cows making good hamburgers, but I do know that military money could make some good schools.  And the Bible I read gives a powerful image of beating “swords into plowshares” — taking things that have been brought death and converting them into things that bring life.  It seems the world may be poised and ready for that kind of conversion.

So it’s not a bad moral gauge – What Would Jesus Do?  Who Would Jesus Bomb?  What Would Jesus Cut?  The Jesus who loved the poor, challenged the rich, made friends with enemies, and healed the sick.  So let’s ask it – WWJC?  And let’s hope the politicians who claim to follow the Christ who carried good news for the poor will ask this little question as the debate goes on.

I don’t think I’ve seen anyone illustrate the crisis of the federal budget better than my friend, Ben Cohen, the dessert-man and founder of Ben and Jerry’s Ice Cream.  I use this video frequently but I have yet to be able to find one that better illustrates the point. He uses his favorite cookies as a measuring unit to show how the dollars stack up… check it out —

Martin Luther King said 40 years ago that every time a bomb goes off overseas, we can feel the second impact of that bomb as we watch our schools crumble and our health care system go up in flames.  As Dr. King said, “A nation that continues year after year to spend more money on military defense than on programs of social uplift is approaching spiritual death.”

So let us hold up our glasses of milk and toast to another world — Christians and non-Christians, Muslims and Jews, all who would rather see ice cream dropped from planes rather than bombs — and let us put our hands together to build that world — a world where the schools have enough money and the militaries have to sale cookies for their uniforms.

—
Shane Claiborne is a prominent author, speaker, activist, and founding member of the Simple Way.  He is one of the compilers of Common Prayer, a new resource to unite people in prayer and action. Shane is also helping develop a network called Friends Without Borders which creates opportunities for folks to come together and work together for justice from around the world.