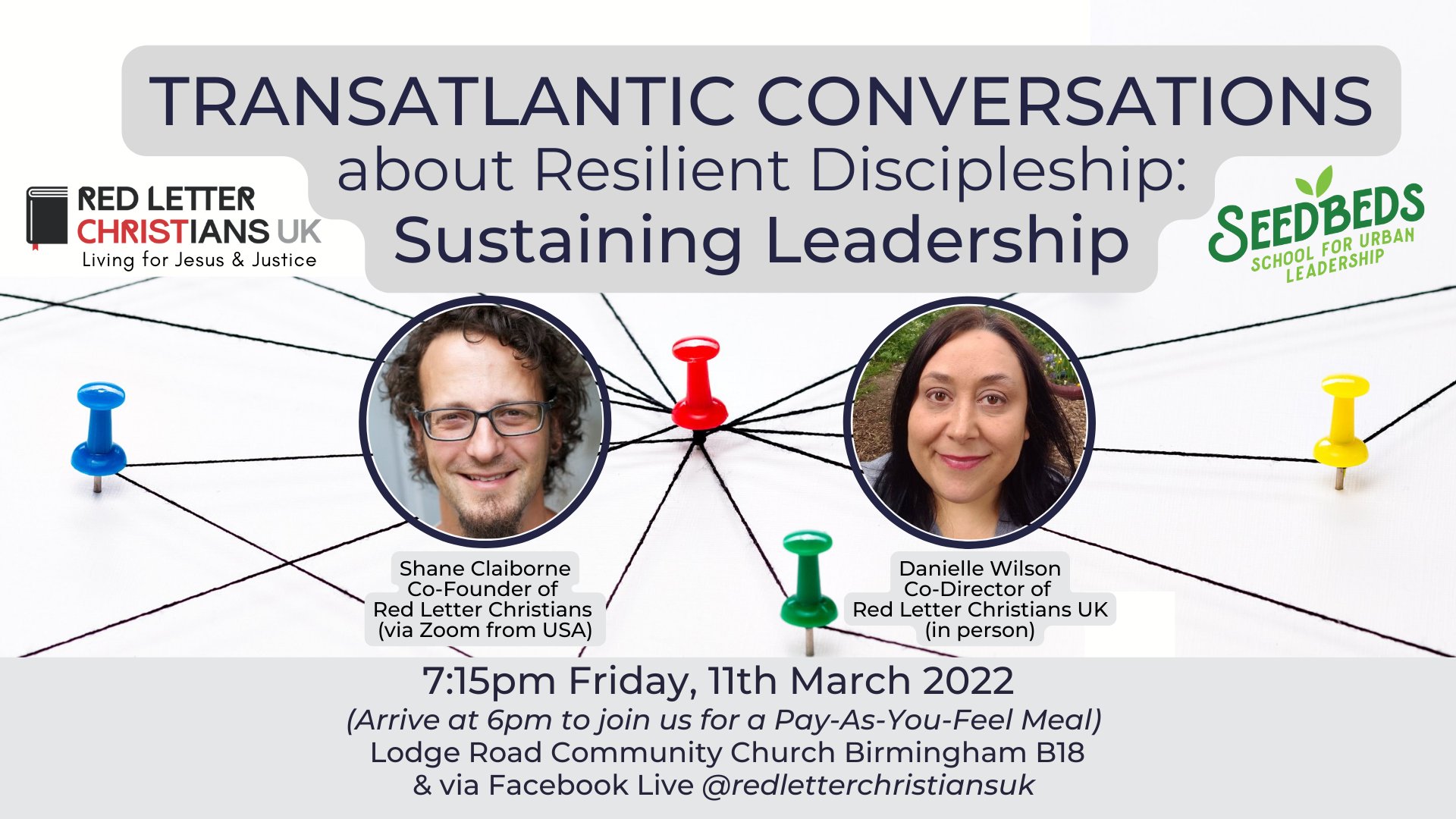 How can Christian discipleship inform and inspire our spirituality, leadership practices and vision for God’s in-breaking, new urban world?

On three Friday evenings in March, Red Letter Christians UK and Seedbeds School for Urban Leadership are teaming up to host Transatlantic Conversations about Resilient Discipleship’ featuring conversation partners focussing on a key area of resilience from contexts on both sides of the Atlantic ocean.

Each evening will begin with a Pay-As-You-Feel Meal at 6pm (provided by the Real Junkfood Project), followed by the main event at 7:15 at Lodge Road Community Church in Birmingham. The event will also be streamed to Facebook Live via @redletterchristiansuk.

Shane Claiborne is a prominent speaker, activist, and best-selling author. Shane worked with Mother Teresa in Calcutta, and founded The Simple Way in Philadelphia. He heads up Red Letter Christians, a movement of folks who are committed to living “as if Jesus meant the things he said.” Shane is a champion for grace which has led him to jail advocating for the homeless, and to places like Iraq and Afghanistan to stand against war. Now grace fuels his passion to end the death penalty and help stop gun violence.

Shane’s books include Jesus for President, Red Letter Revolution, Common Prayer, Follow Me to Freedom, Jesus, Bombs and Ice Cream, Becoming the Answer to Our Prayers, Executing Grace, his classic The Irresistible Revolution, and his newest book, Beating Guns. He has been featured in a number of films including “Another World Is Possible” and “Ordinary Radicals.” His books have been translated into more than a dozen languages. Shane speaks over one hundred times a year, nationally and internationally. His work has appeared in Esquire, SPIN, Christianity Today, TIME, and The Wall Street Journal, and he has been on everything from Fox News and Al Jazeera to CNN and NPR. He’s given academic lectures at Harvard, Princeton, Liberty, Duke, and Notre Dame.
____________________________________________

Danielle Wilson is a pioneer minister, writer, activist and Co-CEO of Red Letter Christians UK, also curating RLC UK’s blog and communications. She is most interested in writing, thinking and talking about Jesus and justice in a way that is honest, inclusive and opens conversation across difference … usually over food. Danielle has been working in missions leadership and communications for 25 years. She has an MA in Contemporary Missiology, focussing on Reconciliation, Justice and Advocacy where much of her work centred around seeking holier and more effective ways of engaging with disagreement, division and doubt arising out of faith spaces.

Danielle is a Methodist pioneer lay minister leading Inclusive Gathering Birmingham, an emerging city-centre church community committed to social justice and spiritual growth particularly in its understanding and practice of God’s radical inclusion, celebrating those too-often marginalised by the church. Danielle has also been a singer for many years with the all-female acoustic soul band, Eeek. She lives in Birmingham with her husband Joel and their two daughters, Evie and Josie.