There’s a controversial Mormon prophecy that claims there will come a time when the United States Constitution will be hanging by a thread as fine as a single strand of silk, and the Mormon people will step in to save the nation from destruction. This is the infamous “white horse” prophecy, which gets trotted out every time a right-wing Mormon (Ammon Bundy, Glenn Beck) says or does something stupid or a Mormon is running for president.

It doesn’t seem to matter how often or how soundly the Church of Jesus Christ of Latter-day Saints has refuted the white horse prophecy as having nothing to do with Mormon founder Joseph Smith. Although he made a few vague claims about Mormonism one day saving the nation, the full-on prophecy as we know it was not written until he’d been dead for nearly 60 years.

The Church denounced the prophecy at its October 1918 General Conference, saying it proceeded “out of darkness, concocted in some corner,” and had not come “through the proper channels of the Church.” The religion’s president at that time, also named Joseph Smith (yes, we do know that is confusing) called the so-called prophecy “ridiculous” and “simply false; that is all there is to it.” Yet the prophecy persists in the Mormon American imagination; we Latter-day Saints seem to love the image of ourselves as saviors who swoop in at the eleventh hour to save the nation from itself.

Speaking for myself, I think the white horse prophecy is bogus. That doesn’t mean that every part of it is BS, however. There is a way in which Mormons can save America from itself — and with every passing year, America needs that particular kind of salvation more and more.

Let me paint a picture. Right now, we live in a country in which it is entirely possible for liberals and conservatives to inhabit unprickable bubbles of their own design. Liberals get their news from CNN and MSNBC, while conservatives tune in to Fox News. Liberals log on to their self-selecting Facebook feeds and see outrage about how the Trump administration botched the coronavirus response, cozied up to Russia, exaggerated his administration’s achievements, and rolled back environmental protections. Conservatives log on to their self-selecting Facebook feeds and share their outrage about Antifa, improper care of military veterans, and Trump not getting more credit for pre-pandemic job growth.

Politically, America has not been this divided in many decades, perhaps even since the eve of the Civil War. Since the 1950s, the Gallup Organization has tracked public approval ratings of U.S. presidents by party. Back in the 1950s, a majority of Americans could legitimately say “I like Ike” and mean it: not only did 88% of the members of his own party approve of him, but 49% of Democrats did too. What we see now, by contrast, is a country split right down party lines: in Donald Trump’s America, on the eve of the 2020 presidential election, a stunning 95% of Republicans said they approved of the way he was running the country. Only 3% of Democrats could say the same.

In other words, we used to have a political gap in this country of thirty or forty points separating Republicans and Democrats. In the Eisenhower example above, it was 39 percentage points. In Trump’s America, it was 92 points, making him the most polarizing figure in modern political history.

Such hyper-partisanship shows little sign of abating even now that Trump is no longer in office. Republicans and Democrats are inhabiting completely different worlds.

And in most of the country, they attend religious congregations that reinforce their views. Over the past three decades, social scientists have tracked a remarkable re-sorting of Americans as Republicans have become more, and Democrats less, religious. In the 1970s, there was no “God gap” in American politics — members of both parties were more or less equally committed to faith. Now, though, Republicans are not only more religious, but are a particular kind of religious, with growing numbers embracing a brand of conservative evangelical Protestantism. Churches become echo chambers, and those who don’t agree with the politics preached from the pulpit become increasingly isolated. One study found that two-thirds of Republicans attended religious congregations where they felt that most of their fellow parishioners shared their political views. Only a quarter of Democrats had the same experience. Not surprisingly given how lonely their experience with religion can be, a strong percentage of Democrats are leaving religion, which compounds the “God gap” even more.

I’m in my early 50s and can’t remember a more politically and religiously divided time. In 2018, I voted a straight-party ticket for the first time in my life. I feel great despair at the way so many people in the Republican Party have abandoned their alleged Christian values to cast their lot with a fear-mongering narcissist.

But I find some hope in my own Mormon people. In my life, all the aforementioned echo chambers apply: where I get my news, for example, and what my social media looks like. Even the neighborhood I live in is largely reflective of my political views, judging from the yard signs I see come election time.

But all that fades away when I go to church, because in Mormonism I don’t have a choice about the community I belong to.

Mormons attend church based on geography, plain and simple. You don’t get to congregation-shop based on which ward has the hippest bishop or the largest youth group (though some Mormons will actually hunt around in different wards before buying a house, knowing that once they move they’ll be locked in to those ward boundaries). And you certainly don’t get to choose where to go to church based on your political tendencies.

I used to rail against this policy, especially when I moved to a rural area where I knew no one and had little in common with the long-term residents of that ward. They were Kentuckians born and bred, and I was a carpetbagger, just passing through. Many hadn’t finished college, and I’d just gotten my PhD. I was the only one with a John Kerry sticker on my car in the parking lot.

And yet in the seven years I lived there, something magical happened to me. I came to genuinely love them, and even laugh about our differences. I once pointed out to a woman in my book club that she had stenciled the Mormon hymn lyrics “peace and plenty here abide” right on top of the gun cabinet in her family room. She laughed too, saying she had never considered the irony. She baked me cookies for my birthday.

Back in those days, my Mormon ward was not the only place in my life where I regularly encountered — and loved — people whose views were diametrically opposed to mine. But I would say it is now. The worlds I swim in at work are primarily academia and journalism, both of which have a particular political persuasion. As I’ve said, our online interactions nowadays tend to merely reinforce our thinking. If they don’t, we all-too-quickly unfriend one another, often in ugly ways.

As a Mormon I don’t get that option. In 2016, I noted with dread that a number of key members of my ward had Donald Trump signs in their yards. It was difficult for me to understand how they could be taken in by this man whose actions and values were so antithetical to the gospel we believed in. But because I knew and served alongside these people personally, I had a duty to attempt to understand. My bishop with the Trump sign was a salt-of-the-earth individual who spent Saturdays helping church members and even total strangers, raking their leaves and visiting them in the hospital. While many of my fellow liberals were denigrating Trump voters as dupes at best and evildoers at worst, there was my bishop, a Trump supporter who fit neither of those categories. Because of geography, I had to sit with that contradiction every Sunday. I think I emerged from it a better person. A better American.

Mormonism teaches me that I don’t get to excommunicate folks from my world just because we disagree. And I am so, so glad of it. Being forced out of my comfort zone is — well, uncomfortable. But it’s uncomfortable in an important way, as we become better in community with one another than we are when we can pretend the other side is anything less than human.

America needs that now more than ever before. So if there is a white horse prophecy in which my religion really does swoop in to save the nation, it will surely be because of this: Mormons have not yet given up on each other, and on the possibility of life together. 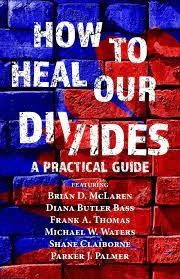