Recently I wrote a column outlining several reasons Republicans should be worried for the long-term health of their political party. In a nutshell, demographics are not on their side.

For example, religious people are more likely to be Republican—but what’s growing fastest in America is nonreligion, and nearly seven in ten Americans who leave organized religion, or never claimed it earlier in life, vote Democratic.

Likewise, white people are more likely than nonwhites to be Republican, but whites are losing market share a little more each year as the United States becomes more racially diverse. In the 1960s, more than 8 in 10 Americans were white. By the 2060s, that’s projected to be fewer than half.

Lest you think I am letting the Democratic Party off the hook, however, let me be clear: Democrats are in every bit as much trouble as Republicans are, but for different reasons. That’s because Democrats have largely forgotten about core moral values that once defined the party. 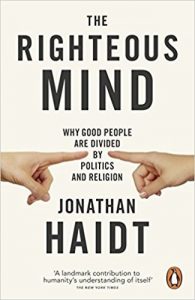 The social psychologist who has built a career on this argument is Jonathan Haidt, who in The Righteous Mind outlines five core “foundations” of morality. (He later added a sixth, but for simplicity’s sake here let’s discuss the original five.) Liberals excel at two moral foundations: Care and Fairness. Care means having compassion on the less fortunate and standing up for the underdog, even at great personal cost. Fairness means an emphasis on justice, equal rights and freedom from oppression.

This is why liberals like programs like Affirmative Action, which appeals to both those foundations, and why they are furious about how Trump is handling immigration. He is harming people who are weak and vulnerable, including innocent children who did not ask to be brought over the border. Harm to innocent people is a major trigger for the Care foundation to kick in.

Authority: This is respect for leadership and social order to stave off chaos. Conservatives emphasize that authority is necessary for a civilized society, while liberals are primarily animated by avoiding authority’s abuse.

Sanctity: Haidt defines this as a concern for social purity and the idea that some things are just sacred. The Right has set the terms for this conversation so that “sanctity” is attached to some things but not others: “sanctity of life” connotes a position against abortion but not necessarily against the death penalty, for example. But at least conservatives talking about sanctity at all, even if inconsistently. Liberals have largely abandoned this language and score lowest here of all five foundations.

Conservatives, then, have a built-in advantage when it comes to winning elections: their moral palate is broad enough that they have something positive to say about all five moral foundations. That is, conservatives also uphold care and fairness. Liberals, at best, speak positively about only two of them.

When Haidt first began his research, he received hate mail from liberals who dismissed conservatives out of hand as narcissists who cared only about their own self-interest. Reactions like these are fine—so long as liberals want to keep losing elections. If they would rather start winning, they need to pay attention to values they used to care about.

Think of John F. Kennedy, asking young Americans to forgo their individualism and “ask, rather, what you can do for your country” (Loyalty). Think of Franklin D. Roosevelt, strengthening American power and uniting disparate factions under his leadership (Authority). Or think of Harry Truman enlisting religious leaders in the fight against communism. He did so not only because he realized he needed to tie the global struggle for democracy to deeply held religious ideals in order to motivate his followers, but also because he believed in the connection between religious faith and democratic ideals (Sanctity).

When was the last time we saw a Democrat actively court religious leaders—not merely in a calculated way to achieve a political end, but because he or she sincerely tied that political end to sacred principles?

Democrats have ceded the moral high ground in these three areas over the last several decades, but right now is a perfect opportunity to learn from their mistakes. That’s because of the bizarre fact that conservatives have elected a man who pays lip service to their values but does not himself believe in them. Jealous for Loyalty, Trump demands it of others but does not extend it himself — as evidenced by his undisguised fascination with America’s enemies. He cares more about sitting down with dictators and thereby being perceived as powerful than he does about showing Loyalty to the nation.

Moreover, the president who called himself the “law and order” candidate has proven that he sees himself above the law. In his brief time in office he has accumulated a long list of ethics violations, revealing just how shallow his regard for Authority is. His legal troubles have been bottomless.

And we don’t even need to delve into the irony of Trump, an adulterer, being the poster child of conservatives who are enamored of the Sanctity of marriage and family.

In short, the president is vulnerable. That, combined with the aforementioned weakness of the Republican Party as the nation’s demographics shift toward Democrats, should make for a reversal of power.

But I fear that liberals, having long accustomed themselves — ourselves — to speaking with less than one-half of a moral language, will falter.

If liberals cannot regain our fluency with all five elements of morality, we will remain a fractured den of individualists whose best days are behind us.