EDITOR’S NOTE: This excerpt is from Ryan Kuja’s book From the Inside Out: Reimagining Mission, Recreating the World (Cascade Books, 2018). All rights reserved. Used with permission.

Not long ago I saw a television feature on the Democratic Republic of Congo. DRC rarely makes the news and when it does, it is usually about the ongoing complex humanitarian emergency in the eastern part of the country, one that has persisted for over two decades and has resulted in more lives lost than in any other conflict since World War II.

I figured the program was going to be related to this so I was surprised to hear the reporter begin talking about entrepreneurship and movie theatres. The program showcased a Congolese filmmaker, Petna Ndaliko, who is also the artistic director for Yole! Africa, the organization he founded to “empower young people to see themselves as agents capable of thinking critically and acting non-violently to shape their own realities.” He hosts a film festival each year and has a vision to create a state-of-the-art cinema in his hometown of Goma, the epicenter of DRC’s entrenched armed conflict.When was the last time you saw the words “Congo” and “artistic director” in the same sentence?

We usually don’t associate this country, or many other countries in Africa or the rest of the Majority World for that matter, as places where social entrepreneurship is thriving, where people are chasing their dreams, where hope is flourishing. That story is rarely told in the West. The media tends to focus on disasters and tragedies. The press sub-Saharan Africa receives has been reduced to about five things: political chaos, war, genital mutilation, child soldiers, and lions. But it can’t all be blamed on the media. 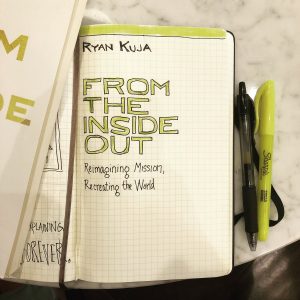 There isn’t anything inherently wrong with this. Perhaps we should donate, especially to an organization we trust for a cause we are passionate about; that is for each of us to discern. And there is no point in going to war with our neurobiological circuitry; it is simply how our brains are wired.

It is important, though, to identify the degradation taking place, as it does with actual pornography. The poor in the images are objectified, portrayed in a way that makes them objects of our compassion. Objectification strips people of their inherent dignity and worth. It also crushes the image of God within.

The West has been shown a single image of Africa and the Majority World. Alongside that has come what Nigerian writer Chimamanda Adichie refers to as the single story. The single image and single story go hand in hand. We are presented with an incomplete picture, an image that both creates and sustains the narrative that the economically marginalized are helpless and need us to rescue them. Treading that fine line between a candid pictorial representation of the inhuman condition of poverty and the sensationalistic, one-sided narrative that these images articulate is not an easy task. There is a tension between an accurate portrayal of the ignominy of extreme poverty and utilizing the degrading “flies in the eyes” images for fundraising campaigns. Many of these organizations that use these questionable photos in their fundraising campaigns do great work in some extremely difficult places — there is a difficult tension between telling the facts, accurately depicting the human faces, and telling the human story while simultaneously maintaining people’s dignity.

Local people know better than anyone else the abysmal nature of poverty and systems of injustice — more so than any Westerner ever can because it is their personal context, not a place they visit. They know intimately the conflicts that rage on their home soil, the food insecurity issues that stunt their children’s growth, the lack of means to send their children to school. They also see the vast potential within their communities — again, more than someone from elsewhere can. Local leaders know intimately the latent capacity for radical transformation. And they also realize that the door to liberation opens from the inside out.

Yet, Western journalists and NGOs haven’t challenged the one-sided narrative of Africa as a place of hopeless starving people ruled over by ruthless demagogues. And continued growth of international nonprofits has created increasing competition for limited funds. According to the head of a large American humanitarian organization in Kenya, “When you’re fundraising you have to prove there is a need. Children starving, mothers dying. If you’re not negative enough, you won’t get funding.” (Rothmyer, “Hiding the Real Africa”)

As activists and development professionals began to critique the latest wave of poverty porn incidents, a few organizations responded by focusing solely on the positive, ignoring the abysmal realities of the places they were working. The single story can quickly swing the opposite way. That is precisely what one-sided narratives do: they bifurcate complex situations into the false opposites of good or evil, poor or wealthy, war or peace, saved or lost, civil or savage, pain or pleasure. To stay in the middle is challenging. To remain in the tension is not an easy task; how much easier it is to narrate only the extremes, to have views that are situated at one pole or the other.

In physics, the word polarize means to restrict the vibrations of light to one direction. Something that is polarized —whether an object in physics, an ideology in politics, or an image of a person in advertising or a fundraising campaign — is loaded with energy in a single direction, to either one of the extremes. The single story acts as a gradient that pulls attention toward either one side or the other of these opposing extremes, deliberately utilized to harness either the positive or negative power of a storyline in order to fulfill a specific outcome.

The NGOs and missions organizations that use humiliating pictures of brown- and black-skinned people from the Majority World to elicit an emotional response are polarizing the narrative to be charged negatively in order to get people to donate. Showing helpless victims awaiting rescue from the West helps them meet their fundraising goals. The NGOs and missions organizations that show only happy-go-lucky brown and black people in their fundraising campaigns and on their Facebook walls are, likewise, polarizing the story toward the positive — a false positivity rooted in ephemeral hope and cheap contentment. This form of the single story is epitomized in the often-used phrase, “The people I met were so poor but so happy!” The misrepresented stories about who people are which are told and spoken into complex situations of poverty and injustice are, unfortunately, the norm rather than the exception.

As poverty and helplessness became the single story of sub-Saharan Africa, AIDS, famine, war, and violence became the dominant images that the media, churches, and organizations show us. The single story of Africa is accompanied by images that visually narrate that story. This single story has become the central narrative that guides faith-based sojourners, shaping the ways we view marginalized people.

Seeing the African, for example, as a victim that needs rescuing can reinforce paternalism and ideas about helplessness, which leads to a belief that we must do things to and for others. At best, this results in projects and programs that are oriented toward charity, rather than biblical justice, which seeks to undermine the very roots of oppression and marginalization. At its worst, harm is inflicted, dignity is robbed, and the opportunity for mutual transformation is forfeited.